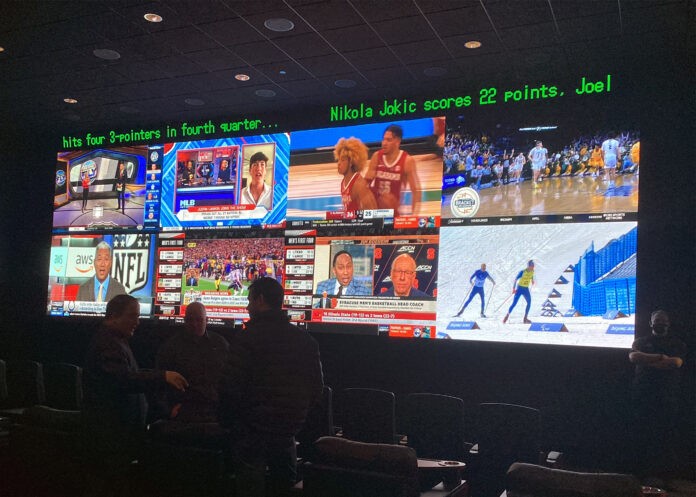 The Dakota Magic Casino Resort, in Hankinson, North Dakota, opened in August of 1999 and hasn’t stopped expanding since. The 63,575-square-foot casino opened with a two-story, 84-room hotel, the next year adding 35,800 square feet of entertainment/convention space, and in 2004 a hotel expansion added two suites and 40 more rooms. The casino, owned and operated by Dakota Nation Gaming Enterprise of the Sisseton-Wahpeton Oyate Tribe, is now 160,000 square feet, with over 1,000 slot and video poker machines, keno, 18 table games, a high-stakes gaming area, poker room, lounge, fine-dining and buffet restaurants, and a golf course with clubhouse. But the latest addition, a new sportsbook that opened in January, has the venue’s biggest feature yet: a 31-foot-by-10-foot LED wall that can easily show eight sporting events simultaneously, go to a custom preset with two side by side or a host of options in between, thanks to technology solutions from Key Digital®. That includes 21 Key Digital KD-IP922™ encoders and 35 KD-IP922™ decoders, three of the new KD-MLV4x4Pro™ 4K UHD HDMI seamless matrix switchers and Key Digital’s industry-leading Compass Control Pro™ software, allowing management to simply and intuitively reconfigure the display into any number of preset configurations from an iPad . All together, this exhaustive setup assures that sportsbook patrons will never miss a game or a race, no matter how busy a sports day or night it is.

“The video wall can do eight different pictures at one time; we’re feeding it with nine different IP encoders, as well as three of the new KD-MLV4x4Pro UHD HDMI seamless matrix with multi-view tiling,” says Paul Hagen, in charge of technology and sales installations with Site On Sound, the Fargo, ND-based AV specialists that installed and integrated the new videowall. Pulling out an iPad, Hagen quickly glides through the process of reconfiguring the videowall by simply swiping and tapping among various preset configurations using Key Digital’s Compass Control Pro software, moving effortlessly from eight discrete video sources to two side by side, and everything in between, on what he describes as “the largest privately owned video screen that I could find in the state of North Dakota.” And while the new videowall is the crown jewel of the new sportsbook, there’s still plenty of other video throughout the space, including 22 other flat-screen televisions that are tuned to games and other matches, four more displays that show wagering odds and another monitor dedicated to in-house advertising, all also fed by the Key Digital 922 AVoIP devices.