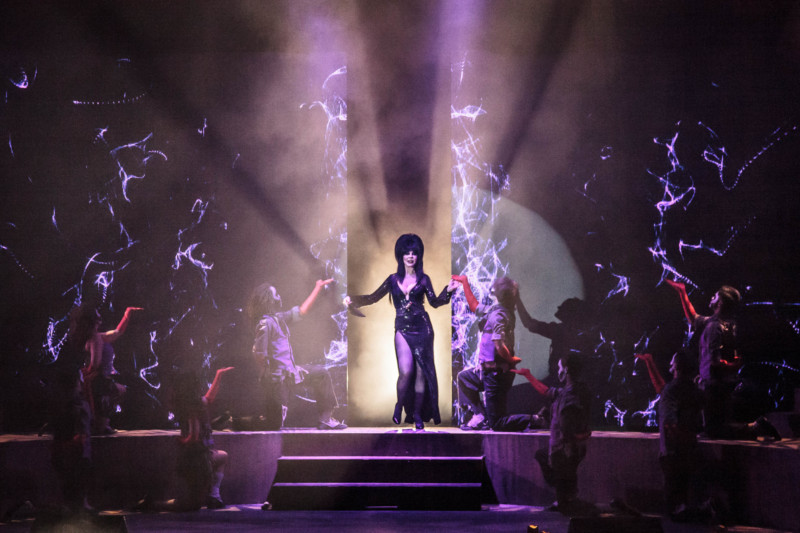 Buena Park, CA, USA — This year’s Knott’s Scary Farm conjures up unprecedented experiences and show-stopping entertainment, including the debut of Special Ops: Infected, where guests fight zombies in an interactive six acre war, and the return of Elvira – Mistress of the Dark in an all-new stage show.

Special Ops: Infected is the first of its kind in North America and will challenge guests to exterminate the infestation of zombies who threaten mankind’s existence.  Armed with specially designed laser guns, brave groups of Knott’s Scary Farm guests will embark on missions, led by their Squad Leader – a loud mouthed, take-no-prisoners commander charged with turning guests into soldiers.   Groups must work together to fend off zombies and complete various missions before time runs out.  If zombies drag their bodies too close, the un-infected’s guns temporarily deactivate, compromising the safety of the entire team.  Soldiers with the deadliest aim will be celebrated with a tally of the number of zombies killed on a display board for other survivors to see each night in base camp. 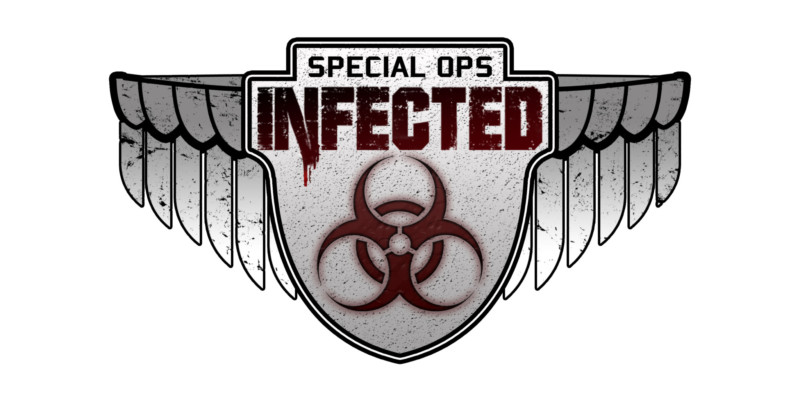 Special Ops: Infected seamlessly integrates interactive gaming technology with an immersive mountainous landscape, delivering a breakthrough interactive haunted experience that is as terrifying as it is challenging.  Missions will take guests through a variety of wilderness terrains, including the unpredictable barrel bridges across the rushing river, through the dark caverns, and through mysterious backwoods.  Six acres of the beloved theme park is now home to mutinous, scream-inducing zombies, and the time has come for a harrowing Special Ops survival mission.

Back by overwhelming demand for 2014 is Elvira – the legendary Mistress of the Dark.  Elvira will headline her all new show Elvira’s Big Top, in the 1,800 seat Charles M. Schultz Theatre twice nightly for the entire run of Knott’s Scary Farm.  In her new show, Elvira becomes the Ring-Mistress of the Park as she hosts a circus carnival of macabre freaks and sinister side show acts.  The show also features explosive dance performances by The Academy of Villains, who return to the stage in 2014 fresh off their appearance on Fox’s So You Think You Can Dance? 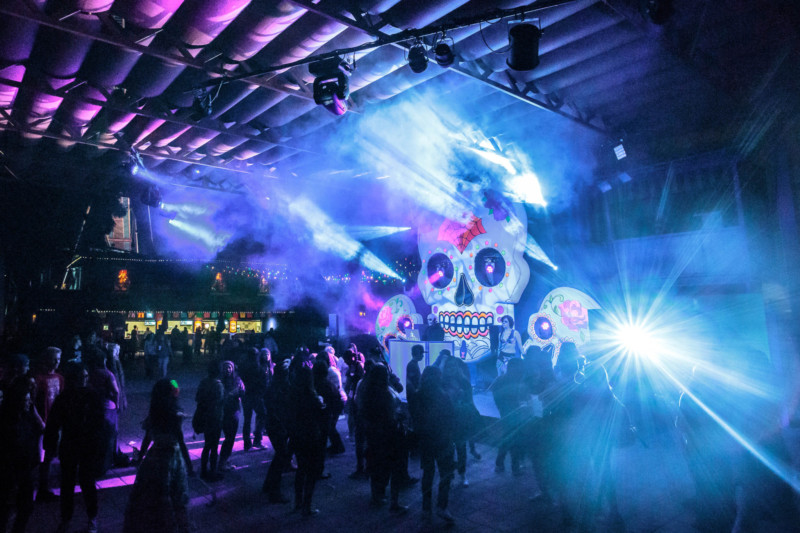 Three new terrifying attractions will debut this year, with more special effects and richer back stories than ever.  These new mazes complement the horrific line-up of seven returning haunted attractions.  This year’s nightmares include:

Voodoo (new for 2014): Trudge cautiously through the cursed swamps of the Deep South, where creatures search the murky bogs for their next bloody sacrifice and demons curse the innocent with Voodoo hexes. Guests must choose their path from a number of foreboding choices, resulting in a different terrifying outcome with each journey into the swamp. 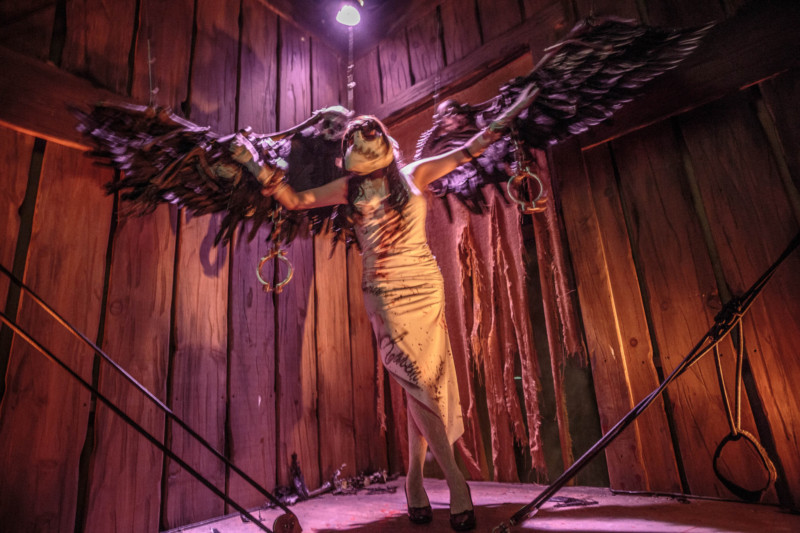 The Tooth Fairy (new for 2014): The joy of hiding a lost tooth under the pillow becomes a nightmare of pain and blood in this new maze that will leave teeth chattering.  This twisted tooth fairy steals more than just baby teeth as he drags his victims out their bedroom window and into a world of deranged dentistry.  Unbelievable special effects include a blackout room through which guests must feel their way out, a disorienting x-ray strobe light room, and a final encounter with the massive tooth fairy, himself.  Say aahhh.

Trapped: Lock and Key (new for 2014): This year Trapped returns with more rooms, more intricate puzzles and a shocking finale more extreme than any experience ever presented at Knott’s Scary Farm.  You become part of the terror and are forced to face your darkest fears, confront your inner terrors and descend into the madness of a maze with no way out.  Trapped is not for the squeamish as the challenges are darker and more terrifying than any that have come before.  (Additional fee and reservation required.)

Trick-or-Treat: Trick or treat, which will it be?  Step forward and ring the witch’s doorbell.  You can come away with a treat, but is it worth it?  Featuring a high flying finale and new scares in the witch’s dining room, this fan favorite is back for its third year of fear. 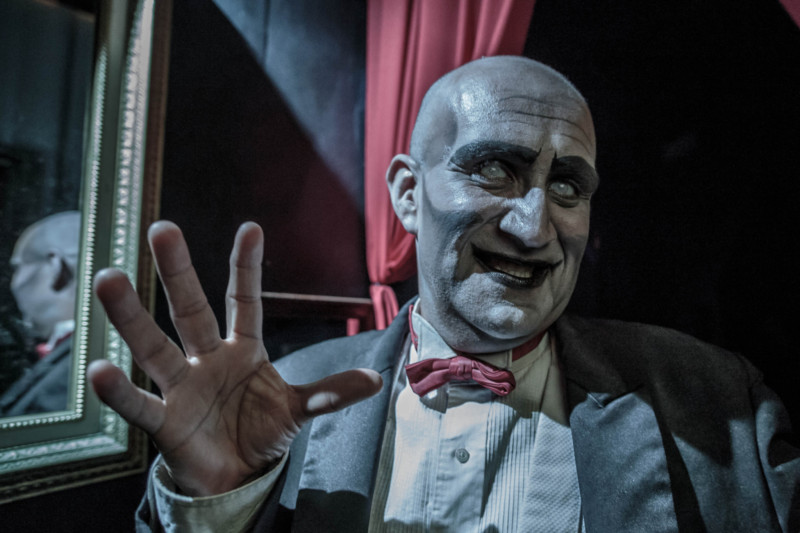 Black Magic: The veil between the living and the dead is severed when Houdini’s ghost materializes during a séance and ushers a host of demonic illusions to play tricks on anyone who intrudes on his theatre.  Back for its second year, Black Magic was one of the most popular mazes in its debut season last year.  Guests will find new magic and even more monsters inside the ominous theater in 2014.

Forevermore: The twisted mind of Edgar Allen Poe comes alive as the “Forevermore Killer” works his way through one haunting tale after another.  Back for its second killer season, Forevermore is one of the longest mazes ever created for Knott’s Scary Farm, and features richly detailed story lines and scenery. 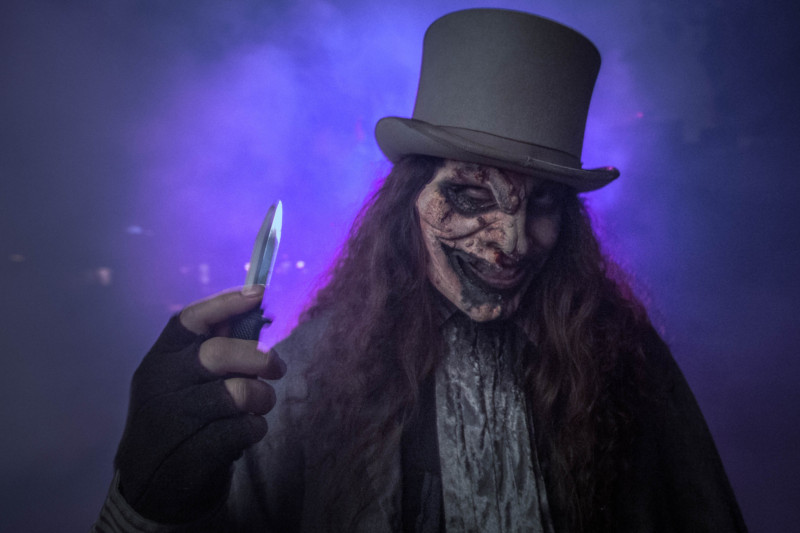 The Gunslinger’s Grave: Return to the Old West and walk in the bloody footsteps of a betrayed and left for dead gunslinger on his path of retribution against a corrupt township.  You may have visited Knott’s historic Ghost Town, but it’s not until you’ve followed the blood lusting gunslinger that you know the real dangers that lurk in the old west.

Dominion of the Damned: The Blood Queen’s reign has ended, but the seductive vampires continue to lure unsuspecting guests into this gothic lair of terror.  Guests’ thirst for this bloody maze was unquenchable last season, and it returns with an unbelievable new finale.

Pinocchio Unstrung: Years have passed since the blue fairy denied him his final wish, but Pinocchio has returned with an army of murderous marionettes intent on killing his former masters. Revenge comes with no strings attached. 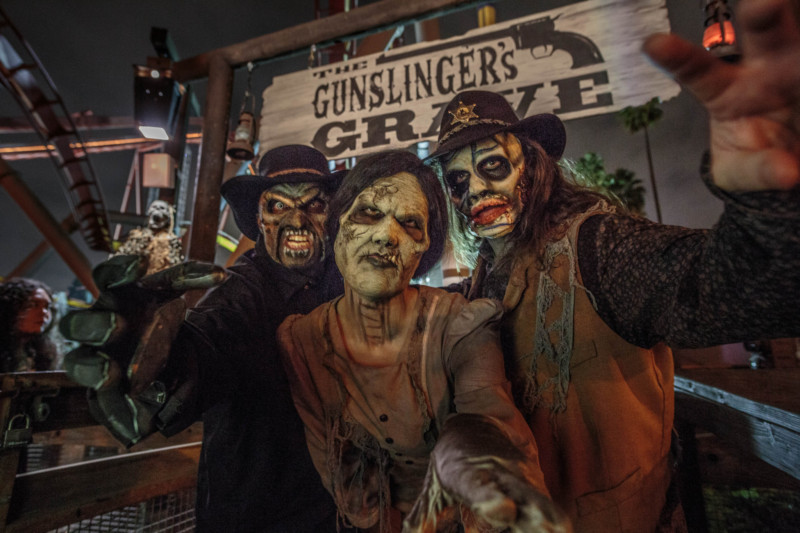 The Witch’s Keep: Many years ago, The Green Witch uncovered a wicked source of power in the depths of the Calico Mine, and now she’s hell-bent on using this mysterious energy to capture and corrupt all who dare enter!  With newly enhanced show scenes, lighting, and special effects, this not-too-scary mine train adventure is perfect Halloween fun.

The Hanging – Everything is Gruesome!,a live stage show in Calico Square irreverently looks back at the year’s pop culture with killer comedy.  Notorious for its special effects, pyrotechnics and high-flying stunts, The Hanging is a no-holds-barred assault on pop culture’s most infamous moments of the past year.  A must see parody! 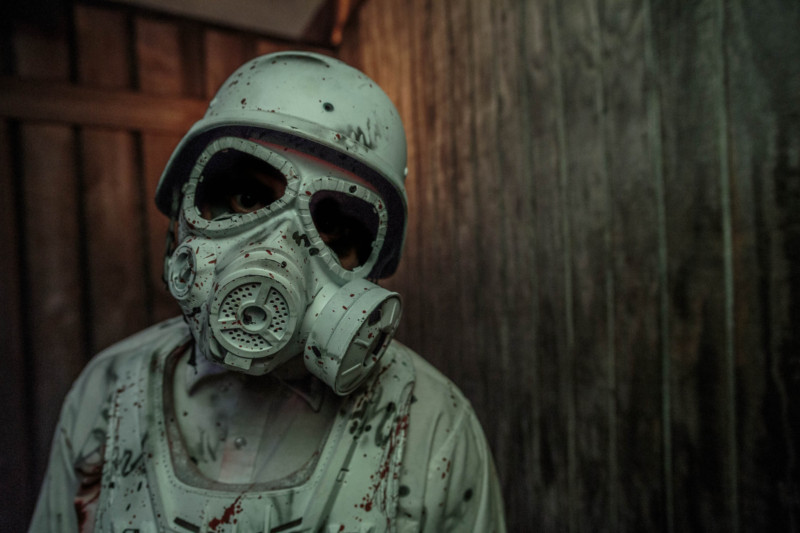 Knott’s Scary Farm is far more than a collection of haunted attractions.  Every night monsters spill out onto the streets and turn theme park midways into murderous scare zones. From the world famous Ghost Town Streets to the Boardwalk area filled with evil clowns, there’s nowhere to hide in Knott’s Scary Farm.

Ghost Town Streets is the original and still most terrifying scare zone that started it all.   Bands of half-human, half-animal monsters prowl the streets and inhabit the fog, and beware the notoriously startling sliders, who lunge from in every fog-filled corner of the land.  Just beyond the streets of Ghost Town lies the mysterious outcropping known as Gypsy Camp, where fortune tellers prognosticate future terrors, and ravenous werewolves howl in the light of the moon.

Fiesta De Los Muertos fuses dance music, colorful costumes, and larger than life stilt walkers in a dance party scare zone with even more characters than last year.  It’s the ultimate late night celebration of Dia de los Muertos.  Around the corner from Fiesta Village is the Boardwalk, where each night of Knott’s Scary Farm, clowns crave your undying attention in the CarnEVIL scare zone. 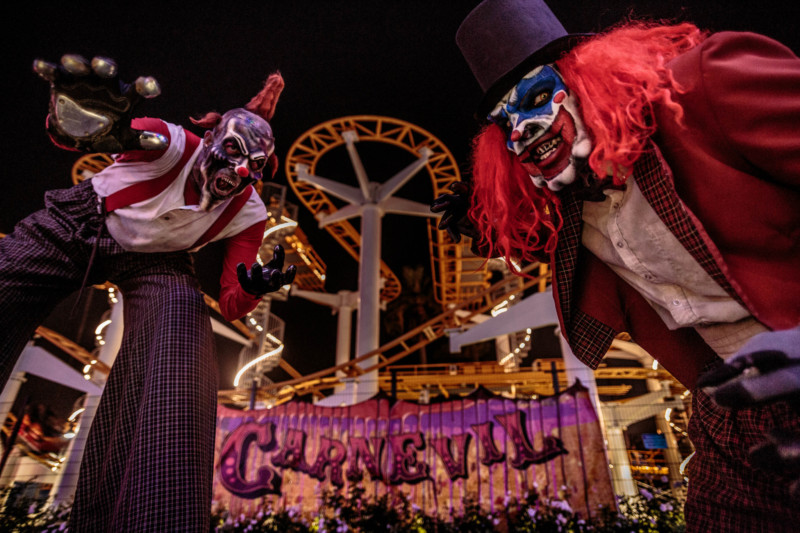 Between the twisted clowns, demented dentists and wretched puppeteers patrolling our park, it’s obvious to see our monsters don’t have their heads screwed on tight. However, this year marks the unexpected return of a legendary creature that doesn’t have a head at all, the Headless Horsemen!  Those who are brave enough to help track the Horseman on social media can win prizes, including park passes.

Joe Kleimanhttp://wwww.themedreality.com
Raised in San Diego on theme parks, zoos, and IMAX films, InPark's Senior Correspondent Joe Kleiman would expand his childhood loves into two decades as a projectionist and theater director within the giant screen industry. In addition to his work in commercial and museum operations, Joe has volunteered his time to animal husbandry at leading facilities in California and Texas and has played a leading management role for a number of performing arts companies. Joe previously served as News Editor and has remained a contributing author to InPark Magazine since 2011. HIs writing has also appeared in Sound & Communications, LF Examiner, Jim Hill Media, The Planetarian, Behind the Thrills, and MiceChat His blog, ThemedReality.com takes an unconventional look at the attractions industry. Follow on twitter @ThemesRenewed Joe lives in Sacramento, California with his wife, dog, and a ghost.
Share
Facebook
Twitter
Linkedin
Email
Print
WhatsApp
Pinterest
ReddIt
Tumblr
Previous articleHersheypark Pays Homage to Fun Houses of the Past with Laff Trakk Indoor Glowing Spin Coaster
Next articleBREAKING: SeaWorld to Invest Hundreds of Millions of Dollars in New Killer Whale Habitats