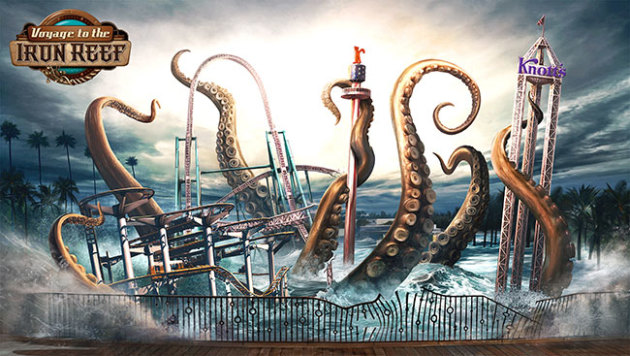 Buena Park, CA, USA (November 13, 2014) — A spectacular new interactive 4-D attraction is coming to the Boardwalk at Knott’s Berry Farm next year. Surfacing in spring 2015, Voyage to the Iron Reef adds high-tech fun for everyone.

Ever since construction crews finished expanding the Boardwalk pier in 2013, guests have happily enjoyed the many new attractions like Coast Rider and Surfside Gliders. But all that activity on the Boardwalk shores has reawakened a mystic lair in the depths below, filled with creatures who have risen up to wreak havoc on the classic So Cal theme park.

The Queen of the Kraken and her aquatic army have surfaced to feed on the steel of any attraction within their grasps. Their unquenchable appetite for coaster metal has turned these creatures into swimming mechanical monsters unlike anything ever before seen on the ocean floor. Only you can save Knott’s from the mysterious creatures that are emerging from the seas beneath the Boardwalk!

If you have what it takes to become a brave deep sea navigator, climb aboard the four-person submarine and embark on the four-minute gaming adventure into the Iron Reef. Equipped with your interactive freeze ray, aim for ballooning puffer fish, an iron clad octopus and hundreds of other menacing 3-D creatures to save Knott’s from a watery doom. You will be surrounded at every turn by enchanting underwater forests, disorienting ocean current tunnels, and mysterious mechanical wreckage that will be brought to life through high definition 3-D animation and other special effects.

The attraction reacts to your actions making each interactive voyage a different experience. In addition to battling the Queen of the Kraken and her hundreds-strong aquatic army, compete head-to-head with the other sailors in your submarine to see who can blast the most creatures.

Voyage to the Iron Reef is the centerpiece of an exciting 2015 at Knott’s Berry Farm.

Joe Kleimanhttp://wwww.themedreality.com
Raised in San Diego on theme parks, zoos, and IMAX films, InPark's Senior Correspondent Joe Kleiman would expand his childhood loves into two decades as a projectionist and theater director within the giant screen industry. In addition to his work in commercial and museum operations, Joe has volunteered his time to animal husbandry at leading facilities in California and Texas and has played a leading management role for a number of performing arts companies. Joe previously served as News Editor and has remained a contributing author to InPark Magazine since 2011. HIs writing has also appeared in Sound & Communications, LF Examiner, Jim Hill Media, The Planetarian, Behind the Thrills, and MiceChat His blog, ThemedReality.com takes an unconventional look at the attractions industry. Follow on twitter @ThemesRenewed Joe lives in Sacramento, California with his wife, dog, and a ghost.
Share
Facebook
Twitter
Linkedin
Email
Print
WhatsApp
Pinterest
ReddIt
Tumblr
Previous articleInPark’s Tenth Anniversary Special Section
Next articleWeber Group’s Newest Projects Include Crayola Experience Orlando and Indianapolis Zoo Orangutan Center