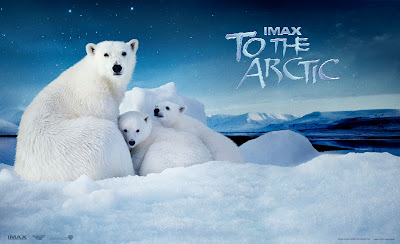 Beach, CA, USA — MacGillivray Freeman Films’ latest 3D IMAX film,To The Arctic was honored with the two top prizes at the 2012 Giant Screen Cinema Association (GSCA) Achievement Awards in Sacramento last week.To The Arctic won awards for Best Film Short Subject (in a first-ever tie) and Best Film For Lifelong Learning, which honors the film with the greatest educational impact. Voted on by the nearly 300 members of the GSCA, the Achievement Awards honor the best films of the year produced for the giant-screen industry.Warner Bros. Pictures and IMAX Filmed Entertainment present the MacGillivray Freeman Film, To The Arctic, a One World One Ocean presentation.

Also at the GSCA Conference, MacGillivray Freeman Films announced its commitment to produce ten new educational giant-screen films over the next ten years, ensuring a steady stream of the highest-quality 15/70 film product for IMAX theatres and other giant-screen cinemas. In addition to new ocean films produced under its One World One Ocean Campaign, MacGillivray Freeman will offer a new film about Mt. Everest and a space film,Hidden Universe, produced by December Media, among other films.

“We are honored with this recognition by the members of the GSCA, and we are especially pleased to share the Best Film Award with Stephen Low and his exceptionally well-crafted film,Rocky Mountain Express,” said director/producer Greg MacGillivray. “It’s no coincidence that both films were shot primarily on 15/70 film stock. Image quality matters, and it is key to creating a satisfying film experience in giant-screen theatres.”

“Our commitment to making high-quality films for the giant-screen theatre community has never been stronger and we look forward to another decade of delivering top-tier product likeTo The Arctic that exhibitors can count on to fill their theatres,” said producerShaun MacGillivray. “These films and the multi-platform educational content we’re producing as part of our One World One Ocean Campaign, support our mission to create meaningful, memorable lifelong learning experiences for audiences.”

Added To The Arctic writer/editor Stephen Judson, “Writing for the giant screen is always a delicate balancing act, and inTo The Arctic, we tried to deliver the essential information with a light touch, so the message would be clear and still entertaining. Our audience surveys show that this approach works, and it is a great pleasure to watch so many viewers rediscover the unique importance of the Arctic as one of our last great wildernesses. We thank our production partners Tom Campion, Chat Reynders and the Canadian Museum of Civilization who made the film possible.”

An extraordinary journey to the top of the world,To The Arctic tells the ultimate tale of survival. Narrated by Oscar® winnerMeryl Streep with songs by Paul McCartney, the film takes audiences on a never-before-experienced journey into the lives of a mother polar bear and her twin seven-month-old cubs as they navigate the changing Arctic wilderness they call home.

To The Arctic has grossed $9.7 million in worldwide ticket sales since its April 20 release with exhibitions in 67 IMAX theatres. The film continues to roll out in IMAX theatres both domestically and abroad.

To amplify the film’s educational impact, MacGillivray Freeman’s One World One Ocean Campaign produced a series of Arctic-themed educational content including a lobby display; a speaker tour with award-winning photographer Florian Schulz (whose Arctic images are featured in the film companion book); an educator guide for middle school teachers; grants for Title I school field trips; online resources including educational videos, photo galleries, and downloadables for kids; and a call-to-action initiative for supporters who want to help protect the Arctic. Exhibitors interested in these resources should contact Mary Jane Dodge at [email protected].

Joe Kleimanhttp://wwww.themedreality.com
Raised in San Diego on theme parks, zoos, and IMAX films, Joe Kleiman would expand his childhood loves into two decades as a projectionist and theater director within the giant screen industry. In addition to his work in commercial and museum operations, Joe has volunteered his time to animal husbandry at leading facilities in California and Texas and has played a leading management role for a number of performing arts companies. Joe has been News Editor and contributing author to InPark Magazine since 2011. HIs writing has also appeared in Sound & Communications, LF Examiner, Jim Hill Media, and MiceChat. His blog, ThemedReality.com takes an unconventional look at the attractions industry. Follow on twitter @ThemesRenewed Joe lives in Sacramento, California with his fiancé, two dogs, and a ghost.
Share
Facebook
Twitter
Linkedin
Email
Print
WhatsApp
Pinterest
ReddIt
Tumblr
Previous articleMedialon Controls Show at World’s Largest Coordinated Architectural Projection Installation
Next articleprojectiondesign Introduces New 3-chip DLP Projector