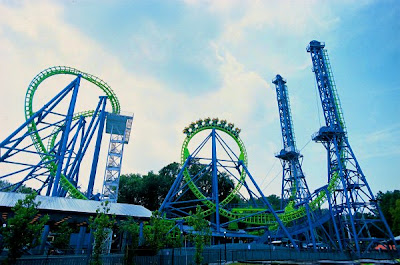 Agawam, MA, USA /Marketwire/ — Six Flags New England today launched its 11th coaster with the debut of the tallest inverted boomerang coaster in the world — Goliath. A coaster of epic proportions, Goliath is the “must ride” experience of the summer. Located in the Crack Axle Canyon of the park across from the all-new JB’s Smokehouse Barbeque restaurant, Goliath has forever changed the landscape of Six Flags New England.

The ride experience begins when guests are strapped into chairs suspended from the track above, Goliath sends riders dangling face-down out of the ride station and up the first tower. Once riders reach the top of the tower, they are dropped into a 20-story vertical free-fall reaching speeds of 65 miles-per-hour, before racing head-over-heels on the outside of a 102-foot-tall vertical loop followed by an enormous 110-foot-tall butterfly turn before rocketing up the second 20-story tower. The excitement keeps building as guests are sent rocketing back through the entire experience backward with nothing beneath their feet but earth and sky.

Goliath is manufactured by Vekoma and joins the park’s impressive list of thrill rides including, Batman the Dark Knight, Cyclone, Pandemonium and the award-winning Bizarro. Goliath opens to the public on May 25, 2012.

Joe Kleimanhttp://wwww.themedreality.com
Raised in San Diego on theme parks, zoos, and IMAX films, InPark's Senior Correspondent Joe Kleiman would expand his childhood loves into two decades as a projectionist and theater director within the giant screen industry. In addition to his work in commercial and museum operations, Joe has volunteered his time to animal husbandry at leading facilities in California and Texas and has played a leading management role for a number of performing arts companies. Joe previously served as News Editor and has remained a contributing author to InPark Magazine since 2011. HIs writing has also appeared in Sound & Communications, LF Examiner, Jim Hill Media, The Planetarian, Behind the Thrills, and MiceChat His blog, ThemedReality.com takes an unconventional look at the attractions industry. Follow on twitter @ThemesRenewed Joe lives in Sacramento, California with his wife, dog, and a ghost.
Share
Facebook
Twitter
Linkedin
Email
Print
WhatsApp
Pinterest
ReddIt
Tumblr
Previous articleThe Producers Group: Project portfolio
Next articleB.I.G. Enterprises Designs Custom Ticket Booth For San Francisco Cruise Company