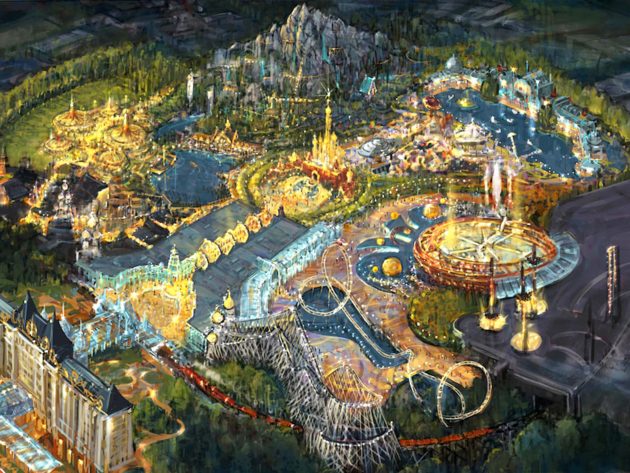 Hollywood, CA, USA and Moscow, Russia – Moschanko Investment Group, and Hollywood-based Goddard Group, have gotten the “go-ahead” for plans to develop and build a new, $4-billion theme park between the Moscow and Kaluga regions of Russia called “The Magical World of Russia.” The new project is being described as a major destination resort and theme park that will reflect Russian and other international cultures, at a level of quality that is equal to the best theme parks in the world today.

As the Kremlin’s press office reported on June 9, during a recent meeting between the Kaluga region’s Governor, Anatoly Artamonov, and Russian President Vladimir Putin, Putin officially endorsed this project.

According to Governor Artamonov, the new park will become a place for family recreation with a highway, a railway, and an airport located in the vicinity. The enormous new amusement park will also include the world’s biggest Aquapark. This facility will provide an opportunity for families to spend a holiday there, and to simultaneously learn “a great deal” about Russia and the world. In addition, the Governor told Putin that the complex will also consist of several sections, including interactive, educational programs for children, and a number of hotels.

According to preliminary data available at this time, the work execution for this giant construction site is estimated at $4-billion, according to the transcript published of the meeting between Putin and Artamonov. Meanwhile, the project will not require financing from the state budget – the whole project will be funded by investors, including the Moschanko Investment Group of Los Angeles, CA.

The region has allocated 220 hectares of land for the project. Governor Artamonov said that the investors are not asking for financial government involvement. Initial plans for “The Magical World of Russia” were first announced in 2012, but had, at that time, a different theme and a lower projected cost of approximately $260 million.

“I am happy to see my long-held dream of creating a true Theme Park and Resort for Russia finally becoming a reality,” said Gene Moshkovich, the founder of Moschanko Investment Group, and the leader of the consortium tasked with developing and managing the project. “From the moment I had my first idea for this park and resort, I never doubted it would be realized. But I also knew I needed the best people in the themed-entertainment and design industry.  For this reason, I partnered with Gary Goddard and his Goddard Group. He and his team are helping me shape my vision for this wonderful new family destination.”

Adds Gary Goddard, Founder and Chairman of Goddard Group, “I am very pleased to see that Gene has moved this project forward, and that he and his partner, Jonathan Zilli, have forged ahead to make it happen. By working closely with Gene and Jonathan, we are striving to create not just a theme park, but a true destination resort that will be unique to Russia and the world.  Using Russian folklore, legends, and history, we are actively working to make this a theme park that will reflect the culture and lore of Russia – and one that will be built to a quality level equal to, or better than, any other world class theme park today.”

Joe Kleimanhttp://wwww.themedreality.com
Raised in San Diego on theme parks, zoos, and IMAX films, InPark's Senior Correspondent Joe Kleiman would expand his childhood loves into two decades as a projectionist and theater director within the giant screen industry. In addition to his work in commercial and museum operations, Joe has volunteered his time to animal husbandry at leading facilities in California and Texas and has played a leading management role for a number of performing arts companies. Joe previously served as News Editor and has remained a contributing author to InPark Magazine since 2011. HIs writing has also appeared in Sound & Communications, LF Examiner, Jim Hill Media, The Planetarian, Behind the Thrills, and MiceChat His blog, ThemedReality.com takes an unconventional look at the attractions industry. Follow on twitter @ThemesRenewed Joe lives in Sacramento, California with his wife, dog, and a ghost.
Share
Facebook
Twitter
Linkedin
Email
Print
WhatsApp
Pinterest
ReddIt
Tumblr
Previous articleVortex Water Journey Awarded 2016 MVP from Aquatics International Magazine
Next articleOlafur Eliasson and Little Sun Design New Sustainable Lamps for Historic Tivoli Gardens