Maintaining the Mission during COVID-19: InPark checks in with the Monterey Bay Aquarium and San Diego Zoo Global 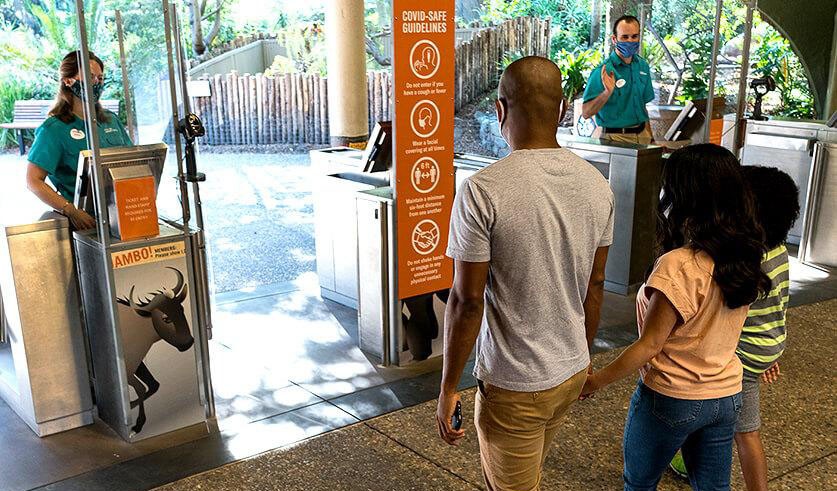 At the end of March and beginning of April 2020, we spoke with David Rosenberg of the Monterey Bay Aquarium and Shawn Dixon of San Diego Zoo Global about how state-mandated COVID-19 shutdowns, which were originally anticipated to last no more than fifteen days, were impacting their institutions. The Monterey Bay Aquarium closed to the public on March 12 and has not been allowed to reopen. The San Diego Zoo and San Diego Zoo Safari Park closed on March 16 and reopened on June 20. As the year comes to a close, we checked up with both of them for an update.

The Monterey Bay Aquarium had announced a reopening on July 13, but only days before the scheduled reopening, the State of California placed Monterey County on a moratorium list due to increased COVID cases and hospitalizations, preventing the opening of indoor facilities at zoos, aquariums, and museums. To date, the Monterey Bay Aquarium remains one of only three Association of Zoo and Aquariums accredited facilities in the state not allowed to open.

The impact on the aquarium becomes apparent when considering the cost of taking care of its animals  – $1 million per month. “We make money through both our gate and donations, but it’s the gate that covers the majority of our operations,” said Rosenberg, the aquariums’ Vice President of Guest Experience, who currently serves on the Executive Committee of the  IAAPA Board and is its Immediate Past Chairman. “Donations help carry out special programs, such as subsidizing the 100,000 school children who visit every year, our impactful conservation and science programs, and special exhibits. But it’s ticket sales that offset our operating costs. When the gate is taken away, it becomes very challenging. Because of this, we anticipate a loss of around $55 million for the entire year.”

The impact extends far beyond the animals. The aquarium has lost over 200 staff members and because it employed more than 500 at the time the pandemic began, it was ineligible for the Small Business Administration’s COVID-related Payroll Protection Program.  On a wider community scale, Monterey County typically sees a $3 billion annual economic impact from tourism, along with $40M in tourism-related tax revenue. Year to date, 75% of that revenue has been lost, and the loss continues to increase. The Aquarium typically draws two million visitors to its gates and the region each year.

The aquarium, however, has not ceased to carry forth its mission during the closure. The volunteers at the aquarium are what Rosenberg calls “passionate and engaged individuals.” To the aquarium’s management, an immediate goal was to keep the volunteer corps engaged and connected to the aquarium. “While we’ve been closed to the public,” Rosenberg said, “we’ve still been operating the volunteer program, with over 1,000 volunteers, updating and connecting with its members regularly so that they’ll be ready to engage with visitors once we reopen.”

The aquarium has also maintained a leading role in the Monterey County community during the shutdown. Within the county, close to 60% of the population are Hispanic and Lantinx. Rosenberg explained, “Most of them are working on farms within the Salinas Valley. When we saw a spike in COVID cases among that group, we felt a need, as a member of the community, to help. Most of theme don’t have the essentials they need and we’ve been working with nonprofit associations in the area to make sure they do. We’re promoting a stakeholder driven approach to COVID by addressing our entire community. In fact, the whole community has come together to promote this effort and we are very supportive of the state for adding an equity matrix [measuring COVID-19 cases and hospitalizations among communities of color and rural communities] to its strategy.”

Rosenberg shared that the aquarium is advocating it be allowed to open during the county’s Tier 1, or “Purple” status, where the state considers transmission rates to be at their worst. “We look at shopping malls,” he said, “which are allowed to be open during Tier 1. We want parity with them and with other indoor establishments allowed to open in the Purple tier. In fact, we are confident that we have created a very safe and controlled environment – one that exceeds state guidelines. We’ve been speaking with other aquariums and museums in California and aquariums that have reopened around the country and have a strategy that would meet guidelines with a very limited capacity and safety measures in place that are data driven. The last thing we want is to be allowed to open only to be forced to close again.”

On June 20, the San Diego Zoo and San Diego Zoo Safari Park reopened to the public with limited attendance and COVID-related health and safety measures in place. “Because all of our habitats are outdoors,” said Shawn Dixon, San Diego Zoo Global’s COO, “we haven’t had to close anything like some zoos and aquariums have been required. The great thing about our parks is that they’re outdoor spaces where people can go with their families and connect with nature again.”

There have been hardships along the way. Like Monterey Bay Aquarium, “We were not part of federal funding,” Dixon pointed out. “We’ve been fortunate to be part of a wonderful community and have been able to make it through this crisis. Financially, it’s hard to run our parks with these additional safety measures. It’s expensive for us, but it’s important because it protects our guests, our staff, and also our animals.”

What had been national marketing campaigns have shifted to regional, with key markets being the San Diego and Los Angeles regions in California and the Phoenix region in Arizona. These were all markets where zoos and aquariums were either ordered to close or faced operating restrictions. “We’ve had a normal mix of visitors,” said Dixon. “Members came early due to special events. When the temperature rose, visitation from outside regions increased.”

When we spoke with Dixon, San Diego Zoo was preparing it annual Jungle Bells celebration while the San Diego Zoo Safari Park was about to start its annual Wild Holidays. “We’ve changed these events based on our experience with operating under the current restrictions,” he told us. “There will be limited attendance and reduced gathering. Entertainment will be going on, but we might put it on a bus that’s moving instead of having it static, which keeps crowds from gathering.”

“We’ve developed quite a few experiences for schools,” said Monterey Bay’s Rosenberg. “40,000 students are taking free online distance classes in both English and Spanish. We also offer virtual field trips, serving up to five hundred students at a time free of charge. This allows students that may not have had access to our physical space because of the distance to visit and it allows our education programs to reach farther than before.”

At San Diego Zoo Global, “visitation to our webcams is through the roof,” said Dixon. “Online education exceeded our expectations with public engagement. We’ve created TikTok videos that have been viewed more than 1.7 million times. We launched a K-5 visual stories module, followed by a popular high school online program. We’ve increased the number of blogs that cover a wide variety of educational topics.”

San Diego Zoo Global continued to increase its online offerings, even after its parks had reopened to the public and both it and the Monterey Bay Aquarium anticipate moving these initiatives forward once the COVID pandemic subsides. According to Rosenberg, “One thing we’ve all seen is that the digital world is very different and is now very much a bigger part of what we do. Our digital strategy is very different than what we had eight months ago. Our online components reach further and wider. We’ve learned during this closure how to reach farther beyond our walls than what we do within those walls.”

As of December 31, the Monterey Bay Aquarium will have remained closed 294 days in 2020, roughly 80% of its operating year.

Shortly after we spoke with Dixon, the State of California issued a new order taking effect on December 6 for the Southern California region that required zoos, aquariums, and museums to close for a minimum three-week period while the region was placed under a stay-at-home order. The order was put into effect when available intensive care beds in the region fell below 15%.

Upon notification of the closure, San Diego Zoo Global issued the following statement: “In following the order from the Governor’s Office, the San Diego Zoo and the San Diego Zoo Safari Park are closed to the public until further noticed. We continue to have essential and dedicated staff on grounds at both parks, ensuring that the wildlife in our care continue to thrive. The urgent nature of our work to save species is unchanged, even in the face of this pandemic. Species will continue to disappear from the planet at an accelerated rate if we do not remain steadfast in fulfilling our mission. We keep at the forefront of our thoughts the well-being of these dedicated employees and the many volunteers who make our parks such special places to visit. We look forward to the day we get to welcome our guests back.”

Joe Kleimanhttp://wwww.themedreality.com
Raised in San Diego on theme parks, zoos, and IMAX films, InPark's Senior Correspondent Joe Kleiman would expand his childhood loves into two decades as a projectionist and theater director within the giant screen industry. In addition to his work in commercial and museum operations, Joe has volunteered his time to animal husbandry at leading facilities in California and Texas and has played a leading management role for a number of performing arts companies. Joe previously served as News Editor and has remained a contributing author to InPark Magazine since 2011. HIs writing has also appeared in Sound & Communications, LF Examiner, Jim Hill Media, The Planetarian, Behind the Thrills, and MiceChat His blog, ThemedReality.com takes an unconventional look at the attractions industry. Follow on twitter @ThemesRenewed Joe lives in Sacramento, California with his wife, dog, and a ghost.
Share
Facebook
Twitter
Linkedin
Email
Print
WhatsApp
Pinterest
ReddIt
Tumblr
Previous article
First steel beam in place at St. Louis CITY SC Major League Soccer stadium
Next article
Santa tests world’s first coaster on a cruise ship