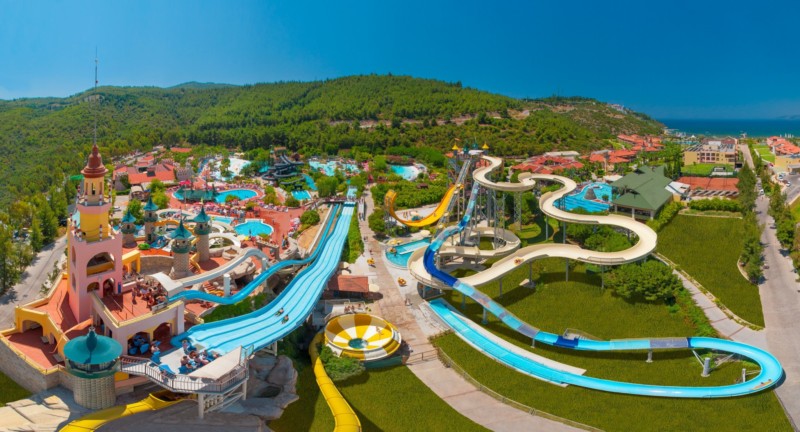 Turkish waterslide company Polin (rhymes with the song “Jolene”) is known for their thrilling themed slides, but often overlooked is their home country of Turkey. Polin’s marketing manager, Sohret Pakis, reports on the opportunities for the entire attractions industry in this popular country that straddles Europe and Asia (based on a report given by Pakis at the 2012 EAS in Berlin).

Tell us about how Turkey’s visitor demographics and its economy are supporting domestic and international leisure tourism.

The domestic market is very large. Turkey has a population of about 75 million people; half are under 30 years of age, and most are well-educated. The labor force stands at about 27 million. There are 51 million credit-card users, 50 million Internet users and 65 million mobile-phone subscribers.

The government is a Republican parliamentary democracy. Since 2002 the economy has grown steadily. Between 2002-2011, annual real GDP grew 5.2%. Geographically, Turkey is easily accessible by 1.5 billion customers in Europe, Eurasia, the ME and NA. In 2011, Turkey was visited by 31.5 million tourists in 2011 and received $23 billion (US dollars) of tourism revenue.

Turkey is very popular among German, Russian and British tourists who, put together, comprise more than 1/3 of the tourists who visit Turkey every year – from Germany, about 5 million tourists, from Russia about 4 million, and from Britain about 2.5 million. The top three entry ports are Antalya, Istanbul and Mugla, in that order.

Your company specializes in waterparks. Is the waterpark industry strong in Turkey?

In Turkey, much of the growth in waterparks is tied to the growth of the resort market, fed by increasing numbers of tourists, most of whom visit the coastal regions. Many of those coastal resorts have incorporated large waterparks open only to their guests. For example, in Antalya, every resort – and I mean every single resort – has its own waterpark.

Turkey has 93 good-sized (5 waterslides or more) outdoor waterparks. 51 are standalone and 42 are in resorts. Those 93 include Turkey’s very first resort waterpark, built in 1988, and its first standalone waterpark, built in 1993. Based on past growth, by 2023, we are projecting a total of 283 waterparks in Turkey – nearly 200 new water parks in the course of the next 10 years! Where waterparks in Turkey welcomed 14 million visits in 2012, by 2023 (the year Turkey will celebrate the 100th anniversary of the Republic) that number is expected to surge to 41 million.

What are some outstanding waterparks in Turkey?

Aquafantasy Waterpark in Selcuk, Izmir, in the Aegean part of Turkey, is said to be the top destination in the area, which has proximity to the sea and the ruins at Ephesus which include the Temple of Artemis. This outdoor park was founded in 2000. Built on 60,000 square meters with 30 unique attractions, it is open 150 days each season and averages 3,000 visitors a day and 450,000 visitors a season. Since its opening, it has gone through several expansions.

Gural Premier is a resort waterpark. It is a part of a five-star beachfront resort located in Antalya, owned by Gural Group. It started operating in June 2010. Construction costs totaled $110 million U.S. dollars. Open only to guests of the resort, it includes 26 first-class waterslides and pirate-themed water-play areas. This is Gural Group’s sixth waterpark resort and the developer plans more.

How has theme park development fared in Turkey?

The first two theme parks built in Turkey, Tatilya and Landora, both in Istanbul, were not successful. Tatilya opened in 1996 with 24 attractions, and closed after 10 years. Some blame it on transportation issues. Others blame it on location. Others say it had operational difficulties.

Landora opened in October 2011 in Istanbul and closed in June 2012. It covered an estimated 21,000 square meters within a 70,000 square meter complex that included a shopping mall, two hotels and an arena. Landora cost  400 million Euros to build. Site selection of this park was flawed. It was very close to four other big, competing complexes. It was an outdoor environment vulnerable to strong winds with no public transportation to the area.

What about successful parks?

Inside the Cevahir Mall in Istanbul is an indoor entertainment complex called Fun Lab (formerly called Atlantis), being operated by the Balo company. The park is built on 11,000 square meters. It includes 18 rides and has a themed playground. In the coming year, Fun Lab plans to add new attractions and is working with KCC from Belgium for the design.

Vialand is a major theme park set to open in spring 2013 on 600 acres in Istanbul. The land belongs to the Municipality of Istanbul. The investment value in Vialand is 450 million Euro, and more than 50 rides are planned, along with a shopping and entertainment complex. Investors are predicting upwards of 30 million visitors a year.

Another theme park currently under construction is Istanbul Theme Park. An estimated 1.5 million square meters of garbage dump was purchased for the $1.9 billion project. 80 million dollars have been reserved just to get rid of waste. This is a consortium project formed by well-known construction companies. Besides the theme park, the project includes an exhibition center, a housing complex and a mall. Officials estimate the project will finish up in 2015.

What other trends are you seeing?

Aquariums in Turkey are a new trend and becoming very popular. The first was built and open to the public in 2009. Turkey is now home to 8 aquariums and by September 2012, those 8 facilities had seen about 14 million visits. By year 2023, visitation is expected to be 50 million.

On waterparks specifically, I expect two trends to emerge over the next few years. The first is standalone indoor waterparks. Currently a few operations have indoor slides, but no indoor standalone waterparks have been built to date. I expect that we will soon see major indoor waterparks with signature rides under construction. The second major trend, which we already are seeing, is the addition of signature rides to both existing parks and new ones being built.

In theme parks and aquariums, there’s huge potential for future growth. Turkey’s young, educated population are eager patrons of the new leisure facilities, and their creativity and vision will guide development in new and fresh directions. • • •