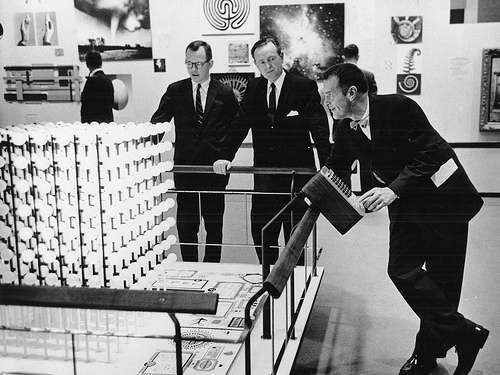 On September 23, The Henry Ford will open its newest permanent exhibition, Mathematica: A World of Numbers…And Beyond inside Henry Ford Museum of American Innovation. Conceptualized, designed and realized by Charles and Ray Eames in 1961, the exhibition conveys the world of numbers and mathematics through interactivity to make the subject more digestible for everyone. Mathematica uses kinetic installations, models, timelines, quotations, imagery, and physical interaction to explain mathematical phenomena, ideas and applications.

“Mathematica not only changed the way exhibitions were designed, but it emphasized the important concept of learning by doing,” said Patricia Mooradian, president & CEO of The Henry Ford. “With its addition on the museum floor, we can provide visitors of all ages a unique, engaging and interactive experience that incorporates the STEM (science, technology, engineering and mathematics) platform.”

The Eames office created a total of three versions of the exhibition. The first is now installed in the New York Hall of Science and the second is owned by the Museum of Science in Boston. The third version, now at The Henry Ford, includes interactive elements unique to it. Several of its elements were first installed in IBM’s vast pavilion at the 1964 New York World’s Fair. Afterwards, it was put on display at the Pacific Science Center in Seattle before becoming the property of the Eames family.

“At the Eames Office, we wanted a venue that was respectful enough to conserve Mathematica as a complete and cohesive work of Charles and Ray’s creation, forward looking enough to restore the experience of the piece—even when that meant carefully adapting new technologies to deliver the original experience, and smart enough to present it not simply as a classic but also as a teaching tool for the students (of all ages!) of today,” said Eames Demetiros, director of Eames Office. “We could not be happier with the multi-year journey of getting it just right for The Henry Ford’s community. The Eames Family and the Eames Office are tremendously grateful to The Henry Ford for their passion and care.”

The heart of Mathematica is populated by large mechanical interactives including the Probability Machine, a device that drops thousands of plastic balls along a grid that once settled, creates a bell curve; Minimal Surfaces, where guests can watch as six wire wands dip in and out of a soapy bath to create delicate bubble forms; and Celestial Mechanics, where with a press of a button, metal ball bearings are released and cycle around down a vortex funnel to demonstrate the orbital relationship between heavenly bodies. Two artifacts are unique to The Henry Ford’s Mathematica installation, Random Walk and Conic Sections. Two sorting baskets on top of the Random Walk flip back and forth—determining the direction of a meandering pathway of lightbulbs. Peering through the viewing portals on Conic Sections, guests can see beams of light transformed into complex shapes, scattered across string formations.

Joe Kleimanhttp://wwww.themedreality.com
Raised in San Diego on theme parks, zoos, and IMAX films, Joe Kleiman would expand his childhood loves into two decades as a projectionist and theater director within the giant screen industry. In addition to his work in commercial and museum operations, Joe has volunteered his time to animal husbandry at leading facilities in California and Texas and has played a leading management role for a number of performing arts companies. Joe has been News Editor and contributing author to InPark Magazine since 2011. HIs writing has also appeared in Sound & Communications, LF Examiner, Jim Hill Media, and MiceChat. His blog, ThemedReality.com takes an unconventional look at the attractions industry. Follow on twitter @ThemesRenewed Joe lives in Sacramento, California with his fiancé, two dogs, and a ghost.
Share
Facebook
Twitter
Linkedin
Email
Print
WhatsApp
Pinterest
ReddIt
Tumblr
Previous articleKnott’s Spooky Farm Brings Daytime Halloween Fun to Southern California
Next articleMinnesota World’s Fair Site Announced Adjacent to Mall of America