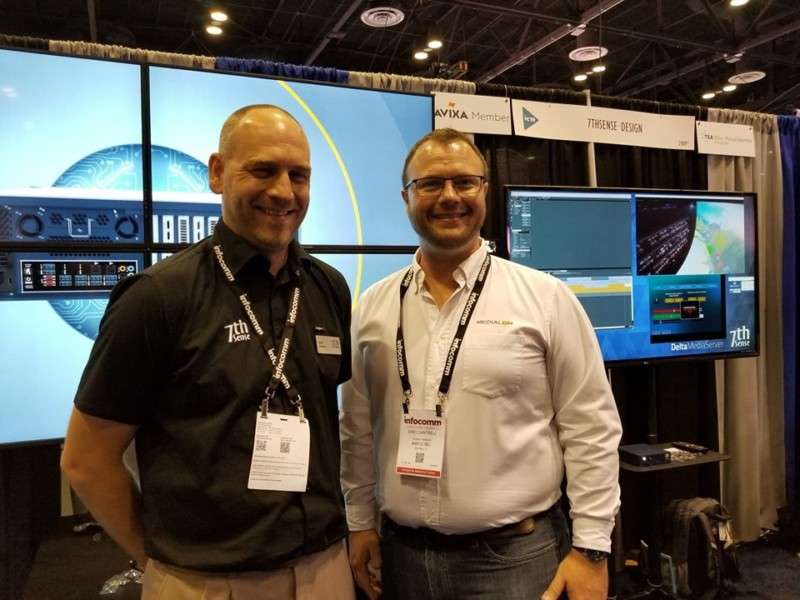 ABOVE (L to R): Matt Barton and Eric Cantrell. Photo by Judith Rubin

Medialon recently became part of the 7thSense Design family. Matt Barton, CEO of 7thSense Design, a leading manufacturer of media servers for high-end AV applications, is now also CEO and part of the new ownership team of Medialon, a leading provider of show control software for entertainment applications. Eric Cantrell, VP Business Operations, Medialon, has been the face of Medialon since 2008 and continues in that role. This marked the departure of Medialon from Barco, which had acquired the show control provider in 2016.

Adam Neale, a founder and prior owner of 7thSense, has returned to the fold to be a part owner of Medialon, which is taking the form of a sister company to 7thSense. The Medialon name is seen as an asset and will be preserved. “It’s a recognized and respected name within the industry,” said Barton. “We want to make sure people know there is separation there, while building on the complementary element of our two product lines.”

Since the initial announcement in June, the alliance has been very well received by the professional community, according to Cantrell and Barton, who referred to the new arrangement as “a natural fit.”

The three companies have much history together. Barton related that the 7thSense founders worked with Barco previously in flight simulation, and that the two companies held a soccer match in 2001. Over the years, Barton and Cantrell, and their respective companies have “run into each other a lot,” as Barton put it – sometimes on Twitter, as Cantrell is an active participant in a Sunday morning Tweetup, #AVinTheAM. Both are active within the Themed Entertainment Association (TEA) as sponsors and volunteers. Barton is currently President of the TEA Europe & Middle East Division Board, and Medialon is Storytelling sponsor of the 2019 TEA SATE – Seattle conference.

Meanwhile, in the 7thSense booth at InfoComm 2019, attendees could test out a demo of the latest iteration of Medialon Manager (version 7, appropriately enough). According to Cantrell, key features include enhanced compatibility with Windows 10, and improvements to the workflow that shorten show programming time. It will begin shipping in fall. And 7thSense recently introduced Juggler, a pixel processor to complement its standard-setting Delta Media Server line. Juggler received a “Best of ISE” rAVe Award in February 2019.

What’s next? “The creative sparks are flying,” said Cantrell. The new Medialon team is committed to business as usual as they continue to develop the product range, provide ongoing customer training and support, and engage in a six-month “listening phase” as the new roadmap takes shape.

Judith Rubin
Judith Rubin ([email protected]) is a leading journalist, publicist, strategist, blogger, content marketing specialist and connector in the international attractions industry. She excels at writing about all aspects of design and technical design, production and project management. Areas of special interest include AV integration and show control, lighting design and acoustics, specialty cinema, digital video and world’s fairs. Judith has ties to numerous industry organizations. From 2005-2020 she ran communications, publications and social media for the Themed Entertainment Association (TEA). In 2013, she was honored with the TEA Service Award. She was development director of IMERSA, and co-chair of the 2014 IMERSA Summit. She was publicist for the Large Format Cinema Association in the 1990s, now part of the Giant Screen Cinema Association (GSCA) and has also contributed to the publications of PLASA, IAAPA and the International Planetarium Society. Already making her mark as a magazine and book editor, Judith joined World’s Fair magazine in 1987, which introduced her to the attractions industry. Launching as a freelancer in the mid 1990s she has contributed to dozens of publications and media outlets including Funworld, Lighting&Sound America, Sound & Communications, Urban Land, The Raconteur and The Planetarian. She joined InPark in 2010. Judith earned a Bachelor of Fine Arts from Pratt Institute. She has lived in New York City and the San Francisco Bay Area, and now makes her home in Saint Louis, where she is active in the local arts and theater community.
Share
Facebook
Twitter
Linkedin
Email
Print
WhatsApp
Pinterest
ReddIt
Tumblr
Previous articleThe Universe expands as Comcast NBCUniversal announces fourth park for Orlando resort
Next articleJoy Burke joins Smart Monkeys as Senior Manager of Special Projects, specializing in Orlando market