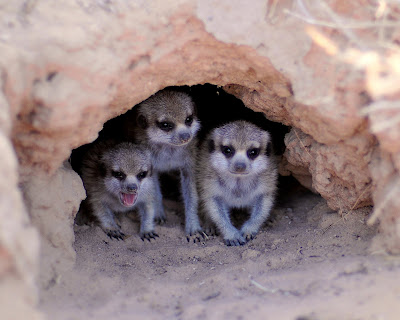 Washington, DC, USA — National Geographic Cinema Ventures (NGCV) announces the release of “Meerkats 3D,” the first in a series of films developed for digital cinemas in museums worldwide. “Meerkats 3D,” which will roll out to theaters internationally this spring and summer, was developed through a partnership between National Geographic Channels International (NGCI) and SKY3D in the U.K. NGCV will distribute a 40-minute and a shorter version of “Meerkats 3D,” both adapted specifically for the cinema.

Meerkats are squirrel-sized members of the mongoose family, known for their upright posture. When perched on their hind legs, as they are famed for doing, they stand 10-12 inches tall, allowing them to keep watch for predators across the southern African plains where they live. Their strength lies in their unique solidarity, which comes in handy for both hunting and protection, and there are 30 distinct calls in meerkat “vocabulary.”

Narrated by Oscar-nominated actress Emily Watson, “Meerkats 3D” takes audiences on a journey with a family of meerkats as they cope with the twists and turns of life in the Kalahari Desert. The film begins as matriarch Klinky’s most recent litter emerges from the burrow for the first time. Klinky and her family, including elder children and regular babysitters Ms. Bean and Harry, must endure turf wars from rival families, attacks from vicious predators big and small and internal family turmoil. The survival of this clan hinges on the meerkat golden rule: Stick together, and keep calling.

“We are excited to bring another wonderful natural history story to life in 3D for digital theaters in museums all over the world,” said Lisa Truitt, president of NGCV. “This truly entertaining family film is the first of many we look forward to bringing to audiences in response to a growing demand for digital content in the institutional market.”

The film was produced by Oxford Scientific Films in association with Principal Large Format with the assistance of Cambridge University for NGCI. Andrew Graham-Brown and Anne Sommerfield directed, with Caroline Hawkins as producer. Robin Cox was the cinematographer, and Phil Streather and Ralston Humble were stereographers. Renoir Tuahene was the film’s editor.

“As the film shows so eloquently, the strength of the meerkat species lies in its selfless co-operation,” said Clare Birks, the film’s executive producer for Oxford Scientific Films. “The story of Klinky and her brood and their tenacity as a group is one that will not only delight audiences but might also remind them of their own families.”

ABOUT NATIONAL GEOGRAPHIC CINEMA VENTURES
National Geographic Cinema Ventures is responsible for production and distribution of giant-screen, 3D and specialty films. Over the last decade, NGCV has produced or released a number of successful films, including Oscar-nominated documentaries “Restrepo” and “The Story of the Weeping Camel”; giant-screen award-winning films “Sea Monsters: A Prehistoric Adventure,” “U2 3D,” “Mysteries of Egypt” and “Forces of Nature”; and feature-length films “The Last Lions” and “Life in a Day.” Lisa Truitt is president of NGCV; and Mark Katz is president of NGCV distribution. www.nationalgeographic.com/movies.

Joe Kleimanhttp://wwww.themedreality.com
Raised in San Diego on theme parks, zoos, and IMAX films, Joe Kleiman would expand his childhood loves into two decades as a projectionist and theater director within the giant screen industry. In addition to his work in commercial and museum operations, Joe has volunteered his time to animal husbandry at leading facilities in California and Texas and has played a leading management role for a number of performing arts companies. Joe has been News Editor and contributing author to InPark Magazine since 2011. HIs writing has also appeared in Sound & Communications, LF Examiner, Jim Hill Media, and MiceChat. His blog, ThemedReality.com takes an unconventional look at the attractions industry. Follow on twitter @ThemesRenewed Joe lives in Sacramento, California with his fiancé, two dogs, and a ghost.
Share
Facebook
Twitter
Linkedin
Email
Print
WhatsApp
Pinterest
ReddIt
Tumblr
Previous articleUrban Land Institute Awards Deadline Extended to March 16
Next articleDataton’s Watchout Technology Takes Center Stage at Dutch Maritime Museum