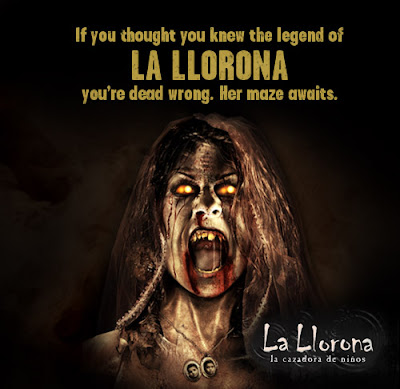 ‘La Llorona: Cazadora de Ninos’ will feature immersive environments depicting scenes and imagery of a rural Mexican village. This year’s maze will tell the haunting story of ‘La Llorona,’ a beautiful girl named Maria from a poor village who desperately sought to win the affection of a rich nobleman. Rejected and grief stricken, she drowns her children in a river. Overcome with anguish, she drowns herself in a bitter end. According to legend, Maria’s tormented and distressed spirit wanders the earth, eternally piercing the night with mournful cries, “My children! Where are my children?” ― giving rise to her name, ‘La Llorona’ or ‘The Weeping Woman.’ La Llorona’s frail, drenched body lurking throughout the dead of night will invariably elicit unwavering dread from the helpless village inhabitants or maze guests, as her presence signifies impending death.

The ‘La Llorona: Cazadora de Ninos’ maze will lure guests into rotting chambers and crypts flanked by decomposed and tortured souls who have met the cruel fate of death and the mournful cries of ‘La Llorona.’ The maze disturbingly journeys guests through the mind’s eye of a child’s nightmare seeded with all the dread, gore and evil that can be imagined.

“At its core, La Llorona is a ghost story so we’re building off the very successful elements of last year’s haunted attraction by adding brand new special effects that speak more to the paranormal side of the story. It’s like tapping into a child’s imagination and creating physical manifestations of those fears, leading to an even more terrifying experience,” said John Murdy, Creative Director at Universal Studios Hollywood.

“Last year we brought the legend of La Llorona to life for the first time as a maze at ‘Halloween Horror Nights.’ It was wildly popular with guests familiar with the story and those introduced to the legend for the very first time,” said Murdy. “At that time, I had the opportunity to speak with many of our guests who shared their personal stories of La Llorona, particularly how she haunted their dreams as children. I found this to be a particularly compelling perspective and created this year’s maze to tell the story of La Llorona through the eyes of a child.”

Joe Kleimanhttp://wwww.themedreality.com
Raised in San Diego on theme parks, zoos, and IMAX films, InPark's Senior Correspondent Joe Kleiman would expand his childhood loves into two decades as a projectionist and theater director within the giant screen industry. In addition to his work in commercial and museum operations, Joe has volunteered his time to animal husbandry at leading facilities in California and Texas and has played a leading management role for a number of performing arts companies. Joe previously served as News Editor and has remained a contributing author to InPark Magazine since 2011. HIs writing has also appeared in Sound & Communications, LF Examiner, Jim Hill Media, The Planetarian, Behind the Thrills, and MiceChat His blog, ThemedReality.com takes an unconventional look at the attractions industry. Follow on twitter @ThemesRenewed Joe lives in Sacramento, California with his wife, dog, and a ghost.
Share
Facebook
Twitter
Linkedin
Email
Print
WhatsApp
Pinterest
ReddIt
Tumblr
Previous articleDiscovery Times Square Announces Final Days to See Terracotta Warriors in North America
Next articleRadio City Christmas Spectacular Returning to Grand Ole Opry