“We scored the film and created the sound design like we were making a blockbuster feature film. Once something sounded great, we turned it up even more,” says Joshua Wexler, president of Threshold Animation. “The audio experience significantly enhances all of our 3-D visuals and drives the audience to scream, laugh, jump and duck at all the right moments.” 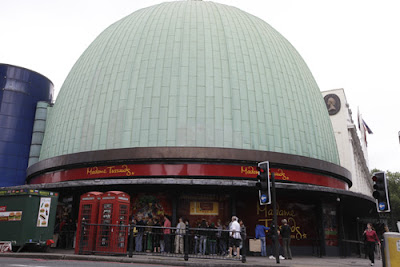 A discrete 7.1 Meyer Sound Cinema Experience system was installed to facilitate an immersive audio experience for this dynamic application. Kraftwerk’s CEO, Christian Hofer explains: “When Meyer Sound introduced the new Cinema Experience product line, it was immediately clear to us that by installing this precision technology into Madame Tussauds’s domed theatre, we would be able to accomplish unprecedented effects while setting a new standard for immersive audio experiences.”

Taking this from concept to reality involved closely coordinated efforts on the part of Kraftwerk’s team. The results are a configuration, compatible with Dolby Format 91 layout, that comprises seven Acheron screen channel loudspeakers, two 700-HP subwoofers, and a Galileo loudspeaker management system with two Galileo 408 processors. Sensations of wind, water, quakes and more are made real for the audience as a team of the iconic super heroes spill off the screen in a nine-minute adventure set in London. 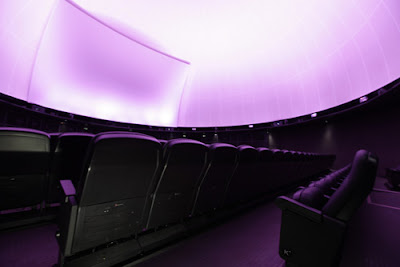 “I have been impressed and overwhelmed by the passion, dedication and attention to detail that makes this project a smashing success,” says Paul Williams, creative director of Merlin Studios, the creative hub for Merlin Entertainments Group, which oversees brands including Madame Tussauds. “The audio is absolutely mind-blowing, and the beautifully crafted film is truly jaw-dropping and hugely entertaining. All in all, this is an amazing product which is being incredibly well received by our guests.”

General manager of Madame Tussauds London, Edward Fuller concurs: “Our guests’ reactions to the immersive experience are just outstanding. The clarity of the audio, coupled with the 3D film and 4D effects allows audiences to feel as if they are really there with the super heroes.”

Meyer Sound’s senior cinema and live sound design project manager Brian Long, and John Pellowe, project director for Constellation and former sound engineer for the late Luciano Pavarotti, mixed the audio content, which combined over 200 tracks of material and was mixed down into a 7.1 channel master for playback utilizing two Avid Pro Tools HD systems and ICON mixing surfaces provided by Stronghire in the UK.

“Mixing in the actual exhibition space enabled us to create maximum impact,” says Pellowe. “With stunning sound effects flying around the room to match the action in the film, we were able to deliver a rich tapestry of immersive sound from the beautifully crafted orchestral score.”

Judith Rubin
Judith Rubin ([email protected]) is a leading journalist, publicist, strategist, blogger, content marketing specialist and connector in the international attractions industry. She excels at writing about all aspects of design and technical design, production and project management. Areas of special interest include AV integration and show control, lighting design and acoustics, specialty cinema, digital video and world’s fairs. Judith has ties to numerous industry organizations. From 2005-2020 she ran communications, publications and social media for the Themed Entertainment Association (TEA). In 2013, she was honored with the TEA Service Award. She was development director of IMERSA, and co-chair of the 2014 IMERSA Summit. She was publicist for the Large Format Cinema Association in the 1990s, now part of the Giant Screen Cinema Association (GSCA) and has also contributed to the publications of PLASA, IAAPA and the International Planetarium Society. Already making her mark as a magazine and book editor, Judith joined World’s Fair magazine in 1987, which introduced her to the attractions industry. Launching as a freelancer in the mid 1990s she has contributed to dozens of publications and media outlets including Funworld, Lighting&Sound America, Sound & Communications, Urban Land, The Raconteur and The Planetarian. She joined InPark in 2010. Judith earned a Bachelor of Fine Arts from Pratt Institute. She has lived in New York City and the San Francisco Bay Area, and now makes her home in Saint Louis, where she is active in the local arts and theater community.
Share
Facebook
Twitter
Linkedin
Email
Print
WhatsApp
Pinterest
ReddIt
Tumblr
Previous articleCinnabar lends artisanship to creation of Home Lands traveling museum exhibition for Autry Center
Next articleFrench Pavilion at Shanghai Expo 2010 relies on projectiondesign® system