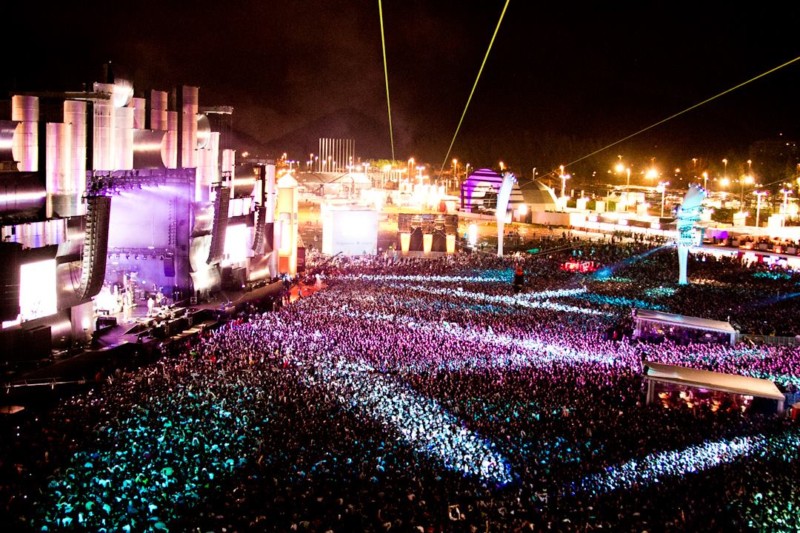 [quote]The event will serve as a major tourism driver for Las Vegas, expected to draw well over 300,000 people to our city over four days.” — Bill Hornbuckle, President, MGM Resorts International[/quote]

Rio de Janeiro, Brazil (April 23, 2014) /PRWeb/ — Rock in Rio, the world’s biggest music festival, has joined forces with entertainment giants MGM Resorts International (NYSE:MGM), Cirque du Soleil and Ron Burkle (The Yucaipa Companies) for the festival’s U.S. debut in Las Vegas in May 2015. An alliance founded on a shared commitment to creating innovative entertainment, Rock in Rio, MGM Resorts and Cirque du Soleil will redefine the modern music festival for U.S. audiences with a monumental combination of the biggest names in music and a fully immersive entertainment experience, all housed in a spectacular, custom-made “City of Rock.”

Over the past 30 years, Rock in Rio festivals have brought more than 1,120 performances to more than seven million people attending and one billion more watching at home around the world, and that number will grow next month at Rock in Rio Lisbon (Portugal) where The Rolling Stones, Justin Timberlake, Lorde, Arcade Fire and Ed Sheeran, among others, are scheduled to perform.

“We are thrilled to welcome MGM Resorts, Cirque du Soleil and Ron Burkle as part of the Rock in Rio USA family,” said Roberto Medina, founder, Rock in Rio. “It’s a testament to the festival’s 30-year history and outstanding reputation to have these entertainment giants on board and, with added power from the partners, our first Rock in Rio USA will be unlike any festival anyone has ever experienced – on the biggest stage in the world in the heart of Las Vegas.”

As the premier entertainment company in the world, MGM Resorts’ expertise in developing world-class infrastructure will lay the groundwork to transform 33 acres of prime Las Vegas real estate into the magical City of Rock. The permanent open-air concert venue will be located on The Strip near the corner of Sahara Avenue and have the capacity for 80,000 people per day. The design and layout will be signature Rock in Rio, complete with five stages; themed streets boasting the sights, sounds, and foods of Brazil, the U.S. and the United Kingdom; thrilling rides including a zip line; food courts, shopping areas and other activities. After the festival, the incredible venue will remain for MGM Resorts to host other entertainment experiences for people from around the world.

Bill Hornbuckle, president of MGM Resorts International, said, “The entertainment scene has changed dramatically in recent years, as has the way consumers want to experience their entertainment. With our innovative new partners at Rock in Rio and the creative geniuses at Cirque du Soleil, we will introduce Las Vegas to an unprecedented music festival in a setting that will never be replicated.”  “

Having hosted resident shows in Las Vegas for more than 20 years, Cirque du Soleil will bring deep knowledge of the market and consumer behavior to the Rock in Rio partnership. This commitment to creating a close and emotional relationship with the public is part of what sets Rock in Rio apart from other music festivals and helps make it the world’s biggest music and entertainment event.

Jerry Nadal, senior vice president, Resident Shows Division, Cirque du Soleil, added, “As a creative live entertainment producer, Cirque du Soleil is uniquely suited to help bring an unforgettable mix of wonder, enjoyment and artistic excellence to Las Vegas with the first-ever Rock in Rio USA experience. Rock in Rio already is a cultural phenomenon around the globe, and we are excited to be part of the festival’s U.S. introduction.”

Rock in Rio, MGM Resorts and Cirque du Soleil plan to offer hospitality packages for tourists that will guarantee festival-goers an unforgettable and seamless experience not only at Rock in Rio USA but throughout their stay in Las Vegas.

The countdown to Rock in Rio USA also is supported by media partners iHeartRadio and NCM Network. Together, a robust advertising and communications campaign will bring news and announcements to consumers nationwide over the next 12 months.

Tickets for Rock in Rio USA will go on sale to the general public in January 2015, but they can currently be reserved, for a limited period of time – without any payment obligation – on the festival’s official website. For more information, visit www.RockinRio.com.

Joe Kleimanhttp://wwww.themedreality.com
Raised in San Diego on theme parks, zoos, and IMAX films, InPark's Senior Correspondent Joe Kleiman would expand his childhood loves into two decades as a projectionist and theater director within the giant screen industry. In addition to his work in commercial and museum operations, Joe has volunteered his time to animal husbandry at leading facilities in California and Texas and has played a leading management role for a number of performing arts companies. Joe previously served as News Editor and has remained a contributing author to InPark Magazine since 2011. HIs writing has also appeared in Sound & Communications, LF Examiner, Jim Hill Media, The Planetarian, Behind the Thrills, and MiceChat His blog, ThemedReality.com takes an unconventional look at the attractions industry. Follow on twitter @ThemesRenewed Joe lives in Sacramento, California with his wife, dog, and a ghost.
Share
Facebook
Twitter
Linkedin
Email
Print
WhatsApp
Pinterest
ReddIt
Tumblr
Previous articleMGM Resorts and Hakkasan Partner to Expand Brands Internationally
Next articleLEGOLAND Florida Becomes First US Park to Go 100% Solar For Earth Day