MGM’s Springfield plan envisions a revived Main Street area with people walking along vibrant tree-lined streets overflowing with restaurant choices, a variety of shopping options for everyone in the family, an outdoor stage, movie theaters, a casino and hotel that all respect and feed off of the area’s existing iconic architecture. The concept for a central downtown retail and entertainment district also includes a pedestrian bridge between the MGM project and the MassMutual Center.

The announcement came as MGM submitted its $400,000 application fee to the Massachusetts Gaming Commission (MGC). The non-refundable application fee will go to both the Commonwealth of Massachusetts and the City of Springfield to fund the vetting and negotiating process that MGM hopes will result in a world-class destination resort in Springfield.

While the new Massachusetts gaming law does not require that the application fee be submitted until later this year when the first MGC filing is due, MGM issued its check early, along with its certification of intent to apply, as a good faith sign of MGM’s commitment to Springfield.

Murren said, “We believe this is a significant demonstration of our desire to partner with Springfield and it gives the MGC and the city the resources they need to move forward during this groundbreaking phase for a new industry in Massachusetts.”

The MGM Springfield project would be developed on three city blocks located just 200 feet off Interstate 91, a popular North/South connector running from Connecticut to Vermont, only a few miles from the Massachusetts Turnpike. The blocks, where the devastation from last year’s tornado is still visible today, run between Union and State streets, and Columbus Avenue and Main Street. MGM controls several land parcels in the proposed development area, with many others under contract.

Murren said, “Ours is a vision rooted in partnerships that would increase tourism by elevating the level of dining, retail and entertainment not only within the MGM project area but hopefully opening onto Main Street, throughout Downtown Springfield and into the rest of this great city.” 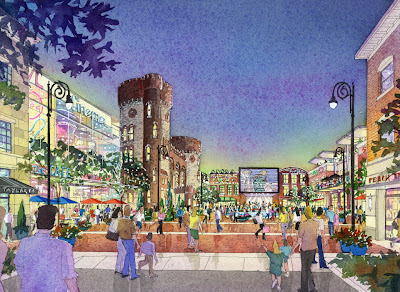 
MGM is hoping to partner with the City of Springfield and others on this project to help rebuild and revitalize Downtown Springfield in the aftermath of the tornado that heavily damaged many Downtown Springfield buildings. Development plans include preserving much of the downtown’s architecture by repurposing the original MassMutual headquarters at the corner of State and Main streets as MGM offices and 73 State Street as the historical entrance to a modern MGM hotel.

Springfield, the region’s cultural epicenter on the Connecticut River, is home to world-class museums, the Basketball Hall of Fame, the Springfield Symphony, the MassMutual Center and several well-known academic institutions.

Murren announced MGM’s vision for an economic revival of Downtown Springfield at the MassMutual Center before a group of elected officials and civic, business and community leaders. The group also heard from Bill Hornbuckle, President MGM Springfield and MGM Resorts Chief Marketing Officer, before a lunch that included informal conversations with guests and members of MGM’s executive team.

Plans also envision an approximately 130,000 square-foot dining, retail and entertainment district, tentatively named Armory Square, and directly accessible from the garage parking. It would include about 25 dining and retail venues including a 12-screen cinema, bowling alley and outdoor stage, to be developed by Davenport Properties of Boston, MA, in partnership with MGM on land now occupied by the tornado-ravaged South End Community Center and Howard Street School. MGM in conjunction with Davenport hopes to be the successful bidder for those parcels when the city auctions them later this year.

MGM Springfield would also include 40,000 square feet of market-rate one and two bedroom apartments, new homes for the young professionals working in a revived downtown entertainment district.

The pedestrian bridge between MGM Springfield and the MassMutual Center, at the corner of State and Main streets, is a direct-link concept that would allow visitors to easily use the MGM Springfield garage for events at the MMC. No indoor entertainment area is planned; instead MGM plans to partner with existing facilities such as the MassMutual Center, Symphony Hall, City Stage and local museums, to help drive traffic to these facilities to support current and cultivate increased tourism in the local economy. MGM’s vision is to jump start a new era of economic development in Springfield that will flow from the project out onto Main Street and into all parts of the downtown and city economy. 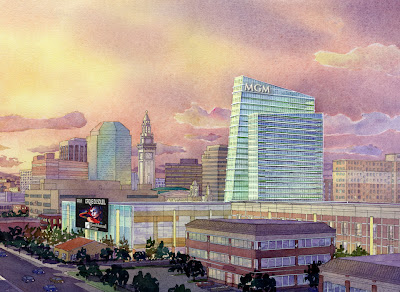 With immediate highway access from Interstate 91, the proposed site is perfectly located to avoid downtown transportation problems. The development calls for strategically located public parking in a covered garage no more than 200 feet from the highway.

Plans also envision a trolley service that would link the entertainment district to key downtown locations including Union Station and the many popular cultural facilities. MGM officials have had preliminary conversations with the Pioneer Valley Transit Authority regarding the creation of such a trolley system.

Murren, Hornbuckle and other members of the MGM executive team have been meeting with city officials, as well as community and business leaders. Last night, MGM hosted a neighborhood dinner to share the project vision and pledge its commitment to the proposed development and revitalization of the area. More meetings with local leaders are planned.

Hornbuckle said the company will soon open a downtown office so people can stop by to share information and thoughts as the community process gets under way. Community involvement is a key priority in every MGM development, he added, and essential to creating a successful, world-class retail and entertainment destination.

MGM has launched a website for MGM Springfield. The website, www.mgmspringfield.com, was developed as a resource for local residents to learn more about the proposed project. The site features information and maps highlighting the proposed development area in Springfield, along with MGM company information, press releases, a Springfield “frequently asked questions” section, and a “contact us” option. There also is a link allowing people to easily “Share Your Thoughts.”

MGM first announced in January that it was interested in a Western Massachusetts gaming license. After considering a Brimfield location, MGM sought a site that could accommodate a dynamic world-class entertainment complex.

About MGM Resorts International
MGM Resorts International (NYSE: MGM) is one of the world’s leading global hospitality companies, operating a peerless portfolio of destination resort brands, including Bellagio, MGM Grand, Mandalay Bay and The Mirage. In addition to its 51% interest in MGM China Holdings Limited, which owns the MGM Macau resort and casino, the Company has significant holdings in gaming, hospitality and entertainment, owns and operates 15 properties located in Nevada, Mississippi and Michigan, and has 50% investments in three other properties in Nevada and Illinois. One of those investments is CityCenter, an unprecedented urban resort destination on the Las Vegas Strip featuring its centerpiece ARIA Resort & Casino. Leveraging MGM Resorts’ unmatched amenities, the M life loyalty program delivers one-of-a-kind experiences, insider privileges and personalized rewards for guests at the Company’s renowned properties nationwide. Through its hospitality management subsidiary, the Company holds a growing number of development and management agreements for casino and non-casino resort projects around the world. MGM Resorts International supports responsible gaming and has implemented the American Gaming Association’s Code of Conduct for Responsible Gaming at its gaming properties. The Company has been honored with numerous awards and recognitions for its industry-leading Diversity Initiative, its community philanthropy programs and the Company’s commitment to sustainable development and operations.

Joe Kleimanhttp://wwww.themedreality.com
Raised in San Diego on theme parks, zoos, and IMAX films, Joe Kleiman would expand his childhood loves into two decades as a projectionist and theater director within the giant screen industry. In addition to his work in commercial and museum operations, Joe has volunteered his time to animal husbandry at leading facilities in California and Texas and has played a leading management role for a number of performing arts companies. Joe has been News Editor and contributing author to InPark Magazine since 2011. HIs writing has also appeared in Sound & Communications, LF Examiner, Jim Hill Media, and MiceChat. His blog, ThemedReality.com takes an unconventional look at the attractions industry. Follow on twitter @ThemesRenewed Joe lives in Sacramento, California with his fiancé, two dogs, and a ghost.
Share
Facebook
Twitter
Linkedin
Email
Print
WhatsApp
Pinterest
ReddIt
Tumblr
Previous articleThe Participation Culture: What I learned from the Man (Burning Man)
Next articleRon Fricke’s Samsara Opens Today in New York and Seattle