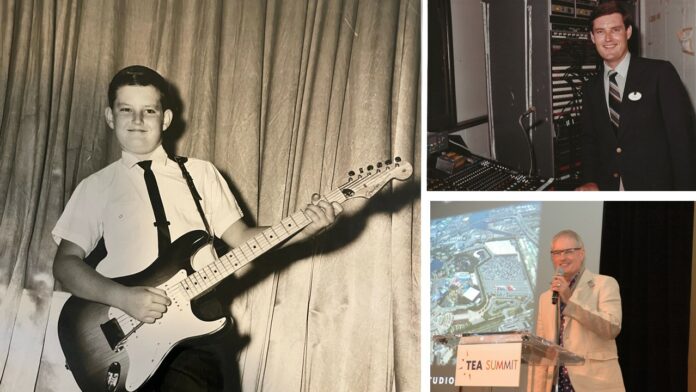 Davis’ retirement was announced in an internal memo distributed by Universal Parks and Resorts and shared here with Davis’ permission: “After 43 years of award-winning work in the theme park industry – with 21 of those years at Universal – Mike Davis will be retiring at the end of March. Mike joined Universal after more than 20 years at Disney and was a member of the team that opened USJ. He went on to serve as USJ’s SVP/Executive Producer of Entertainment for more than 15 years, helping create shows that won 16 THEA or IAAPA awards. USJ productions during his time included the theme park version of “Wicked,” the “Magical Starlight Parade” and the spectacular “Angel” Christmas show trilogy. Mike joined the International team in 2017 and assisted with the opening of the Universal Beijing Resort, which just won the award for best theme park show in the world for “Untrainable.” Over his more than 40 total years in Entertainment Mike helped launch the careers of many thousands of talented actors, made friends and inspired team members around the world. It has been a great pleasure for all of us to work with Mike. His incredible creative vision, his outgoing personality, and his sense of humor have brightened many of our days, often in the most challenging situations. Please join me in celebrating his many accomplishments and in wishing Mike all the best in his well-earned retirement!”

On his retirement, Davis says: “The time has come for me to make one of the most important steps in my life. I have decided to retire! After 43 1/2 years of corporate life, working for Universal Studios and Disney, traveling the world, having the honor and privilege of working with some of the greatest and most talented professional and artists in the industry, it is time for me to take a final bow and exit stage left! My feelings of gratitude and unbelievable fulfillment are truly overwhelming!

“I started singing and playing guitar publicly when I was 6. My life has been heavily influenced and guided by music and the arts. It has always been surrounded by extraordinary people, a loving family, friends and colleagues. What a privileged journey it has been for me! So many memories from all over the globe, with so many fantastic and inspiring people to lift me up and to help guide me to a career I could have never imagined experiencing.

“I’m so thankful for all [Universal has] done to support, encourage and to trust me to push live Entertainment forward in the industry and to strive to often times be the first to try new things, for so many projects ….large and small, for the past 2+ decades. Thank you!

“Also, my thanks to Disney for giving me a chance at management in my first staff Casting job back in 1978 and then giving me 21 years of great opportunities to develop and grow in my management and creative skills and the guidance of learning the importance to not just do the work…but to do in a quality way, with high standards, in the constant pursuit excellence.

“My primary goals have always been to push the envelope, to aim high, to hold myself and others accountable to high standards, to ‘know your audience’ and then use a process that is enjoyable…even when the work is hard, so that the journey together with the team is as meaningful as the opening of the show. I hope I achieved that often.”

Davis shared some of his favorite memories from growing up and performing in Bakersfield, California, along with his time at Disney and Universal. All photos are courtesy Mike Davis, unless otherwise noted.

(L) Davis took up the guitar at a young age. “My older brother took up the accordion, so I got the guitar,” he says. “It was what was left.” (R) Performing at Christmas.

Davis performed at a number of venues throughout California’s Central Valley, including car dealerships and drive-in theaters during the intermission between films.

Mike Davis: “In the beginning of 1978, just after Elvis died in the Summer of 1977, I was one of the first Elvis tribute guys.”

Davis began as a performer, moving on to casting, and finally producing at the Disneyland Resort.

(L) Davis in 1978 in his first management position; (R) Davis in 1992 providing a radio interview for the Grand Opening media event of Fantasmic, which turns 30 this year.

A young Davis as stage manager at Space Place, the outdoor theater in front of Space Mountain eventually removed to make space for Captain EO.

With James Earl Jones, the voice of “The Lion King’s” Mufasa, at a Disneyland event. Davis recalls Jones powerful recitation of the Christmas story during Disneyland’s Candlelight Procession.

Davis with President Ronald Reagan, one of the co-hosts of Disneyland’s live 1955 Grand Opening television special.

Three of Davis’ productions for Universal Studios Japan received the prestigious Thea Award from the Themed Entertainment Association – Peter Pan’s Neverland, The Song of an Angel, and the Universal Spectacle Night Parade.

One project of which Davis is extremely proud is a 30 minute theme park version of the hit Broadway musical “Wicked.”

“We were converting an area of the [Osaka] park to Oz and wanted to do some sort of Oz show in the old Wild West stunt arena. Mark Platt, the producer of the Broadway show, had an office on the Universal lot and I cold called him. I heard back six or seven weeks later and he wanted to talk about it. I went down with some people, including Michael Silver, now the head of Global Business Development, and they said yes. It came around rather quickly.

“Sometimes people are afraid to take that first step. I believe in the three R’s: Reward, Risk, Realize. It’s not so rewarding if you do stuff that you know you can do. The true reward comes from taking reasonable risks that are realized.”

Davis is a theater lover who likes to showcase his teams and collaborators, as he did during the 2019 TEA Thea Awards and Summit, where he made sure they were given equal time on stage.

“I was once asked how many people have seen my work,” he told InPark. “When you look at theme park attendance and all the shows, big and small that I’ve done, including the Pocahontas premiere in New York’s Central Park for a crowd of over 100,000, it has to be hundreds of millions of people that have seen my work over my career.”

How is the entertainer who opened for Glen Campbell at age 11 planning on spending his retirement? In the theater, of course, with a visit to New York for a week-long binge of Broadway shows.

Joe Kleimanhttp://wwww.themedreality.com
Raised in San Diego on theme parks, zoos, and IMAX films, InPark's Senior Correspondent Joe Kleiman would expand his childhood loves into two decades as a projectionist and theater director within the giant screen industry. In addition to his work in commercial and museum operations, Joe has volunteered his time to animal husbandry at leading facilities in California and Texas and has played a leading management role for a number of performing arts companies. Joe previously served as News Editor and has remained a contributing author to InPark Magazine since 2011. HIs writing has also appeared in Sound & Communications, LF Examiner, Jim Hill Media, The Planetarian, Behind the Thrills, and MiceChat His blog, ThemedReality.com takes an unconventional look at the attractions industry. Follow on twitter @ThemesRenewed Joe lives in Sacramento, California with his wife, dog, and a ghost.
Share
Facebook
Twitter
Linkedin
Email
Print
WhatsApp
Pinterest
ReddIt
Tumblr
Previous articleThe National Museum of African American History and Culture appoints Adele Hixon-Day as Head of Advancement
Next articleDaytona Beach waterpark, under new management, receives fresh refurbishments