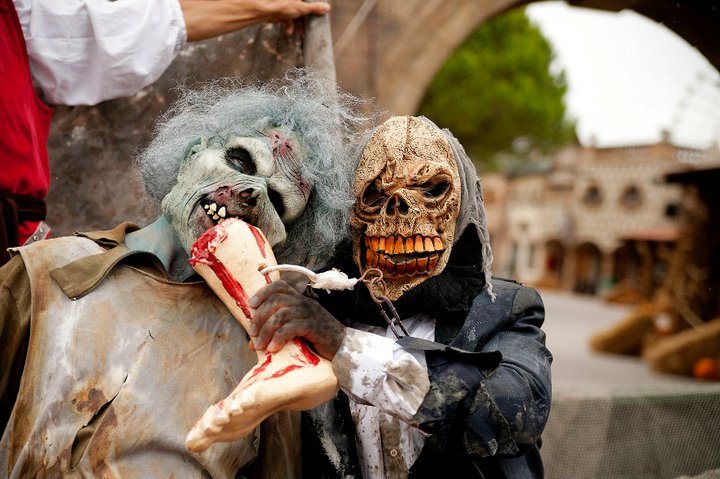 A terrible storm on the ocean, shipwrecked on a mysterious island …

To land on an exotic deserted beach does not always prove a fortune, especially if the natives are cannibals and skilled hunters of men. Their dark huts hide terrible voodoo and the chilling preparations for the banquet of their tribal chief. Appreciated by its guests, THE CHEF practices the culinary arts as a true expert. His main ingredients are always fresh. Choose them while they’re still alive.

The BLACK SERGEANT had a gift. Sharpshooter, virtually foolproof, specializing in breaking down the enemies. Once fallen on the field of battle, he returned from the grave to continue his job and kill anyone across the borders of its perimeter. You can try to escape but remember that he is not the only source of danger …

A gang guilty of monstrous crimes, which hides a horrendous claustrophobic secret lair  …

They are former soldiers of the secret services hired by a powerful mob boss in South America. Their hiding place was nicknamed El Matadero, the Slaughterhouse! They have nothing to lose and are experts in every kind of torture. Their leader is EL TARANTULA, a sadistic criminal, particularly heinous when it comes to use of the knife! Her best friend? A tarantula, but even she trusts him all the way!

Something’s not right. Why are the departures at this hotel always lower than arrivals?

It seems a very traditional hotel, the HOTEL KALIFORNIA. The doorman greets you, makes you sign the register and hands you the key. Then, however, it becomes a different story. The curse that has befallen the Hotel Kalifornia also overwhelms you, and during the anguished search for your room, you will come across the bloody hotel staff.  Beware of them, looks can be deceiving … The most dangerous calls herself Lady Klean. It is now a criminal place, very capable in transforming mundane objects into terrible instruments of death.

A journey into delirious fear, with sinister entities  that have the sole purpose to terrorize beyond all bearable limits! Phobia faces you and sees that your worst nightmare is yet to begin. (Access with additional ticket)

And the disturbing welcome you as soon as you have crossed the gates of the park! Zombies and skeletons, witches and monsters, all the protagonists of an imaginary nightmare, will meet and drag you into the dark world of Halloween. There will be artists in the Park, to give you a taste of all the brand new, fantastic musicals and shows in the day. A phantasmagoria of music and themed costumes to make you realize that your journey into the emotions of Halloween is reality.

And the teenager scion of a strange family, a group of characters that seems straight out of a horror movie. And surely some problems have it too! We talk about the star of this fun musical tones “gothic”, who decides to present her boy friend to all the disturbing relatives. You bet, there will be trouble, especially for the lover. We’ll find out if it can stand up to the special stages which will submit it to the wacky family …

An impressive sight, with ballets, melodies and unforgettable songs, which stages a no holds barred fight between Good and Evil.When the merciless forces of evil plot ally to those beyond the grave is difficult to predict the victory of the “good”, especially if there is to guide a young man who has only his courage as a weapon. The light will triumph over darkness? We’ll see …

Ghosts of Halloween – The Musical

A musical that will enchant audiences of all ages. It ‘s the story of four young men who have created a whimsical team work really sui generis. They are the Ghostbusters!Necessity is the mother of invention, you know. But even they could not foresee that the city would be really invaded by hordes of paranormal presence. At work, then, except that if you are unable to get the better of his enemy, you can always find a deal!

Along the paths of the park the entire cast of artists from Wonderland in an incredible parade will march to the rhythm of the evocative music of Halloween. It will be a parade of characters from nightmare, where the means of transport are up to their fearsome occupants. The parade ends in Piazza del Levante, with a suggestive choreography together which will celebrate the end of a memorable day.

n the legendary and mysterious island of Avalon is a castle, concealed by steep mountains. The castle houses the school of witchcraft of the most powerful wizard of all time, Merlin! It will be he who lead viewers to discover the most arcane secrets of the wizarding world, in all their various shades …

Joe Kleimanhttp://wwww.themedreality.com
Raised in San Diego on theme parks, zoos, and IMAX films, InPark's Senior Correspondent Joe Kleiman would expand his childhood loves into two decades as a projectionist and theater director within the giant screen industry. In addition to his work in commercial and museum operations, Joe has volunteered his time to animal husbandry at leading facilities in California and Texas and has played a leading management role for a number of performing arts companies. Joe previously served as News Editor and has remained a contributing author to InPark Magazine since 2011. HIs writing has also appeared in Sound & Communications, LF Examiner, Jim Hill Media, The Planetarian, Behind the Thrills, and MiceChat His blog, ThemedReality.com takes an unconventional look at the attractions industry. Follow on twitter @ThemesRenewed Joe lives in Sacramento, California with his wife, dog, and a ghost.
Share
Facebook
Twitter
Linkedin
Email
Print
WhatsApp
Pinterest
ReddIt
Tumblr
Previous article
Indiana Appeals Court Sides With Lori Koch in Dispute Over Control of Holiday World
Next article
Six Flags Over Georgia – Fright Fest