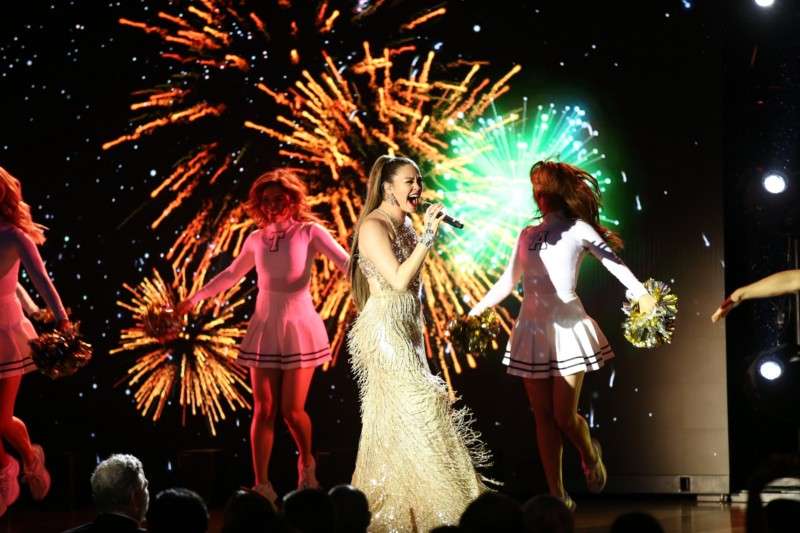 Every year, hundreds of entertainment professionals from around the globe pour into Anaheim, CA to join their colleagues for the Themed Entertainment Association (TEA) Thea Awards Gala at Disneyland Resort. The TEA Thea Awards, created in 1994, honor excellence in the creation of compelling places and experiences. Thea Award recipients are people, projects, and technologies from around the world, nominated and judged by a committee of their peers, and celebrated at the annual, black-tie Gala. This year’s star-studded event featured Emmy and Golden Globe award winner, and member of the President’s Committee on the Arts and Humanities, Debbie Allen.

The Thea Awards have grown in prestige and scope in the course of a quarter-century, and expectations naturally run high among an audience of professionals dedicated to the creation of guest experiences. To produce its 24th Annual Thea Awards Gala, held April 7, 2018 in the Grand Ballroom of the Disneyland Hotel, TEA turned to one of the top creative firms within its own industry of themed entertainment: Miziker Entertainment, led by Ryan Miziker.

Miziker Entertainment is a world leader in the design and production of shows and parades, media-based attractions, and memorable guest experiences. The Miziker name has long been associated with TEA and the TEA Thea Awards: Company founder Ron Miziker produced the Gala several times and received the Buzz Price Thea Award for a Lifetime of Distinguished Achievements in 2015.

As producer, Miziker was, therefore, in an ideal position to speak the language of themed entertainment and capture what was unique about each of the 20 award recipients. “Our theme for the night was ‘Celebrate the Creative Spark,’ and it informed everything we did, every decision we made,” said Ryan Miziker. “We wanted to show the fun, the passion and the importance of projects in the industry.”

The audience, TEA and the industry responded to the Gala show with enthusiasm, applause and accolades. Bob Rogers, chairman of leading experience design firm BRC Imagination Arts, and a member of the founding committee that created the Thea Awards, said, “Every detail was flawless. It was intelligently written, intelligently sequenced, technically outstanding, well designed, well cast, smoothly produced, well organized – every detail attended to with precision!”

“Our TEA Thea Awards serve our mission and members by honoring excellence and celebrating the individual creators, companies, and teams who make these honored projects come to life,” said TEA COO Jennie Nevin. “This year’s show, produced by Ryan Miziker and Miziker Entertainment was fantastic, full of fun, excitement, and inspirational, life-changing moments. Every moment of the Gala reflected Miziker’s passion for this industry as well as their deep understanding of it, and their dedication to high production values and great storytelling. We can’t thank them enough for bringing their great gifts to what was our largest Thea Awards Gala ever.”

Miziker Entertainment enjoyed a dual role at the Thea Awards in 2018; In addition to Gala show production responsibilities, Miziker was honored with a Thea Award for Outstanding Achievement for Chimelong Ocean Kingdom’s Journey of Lights Parade. Chimelong Group, headed by Chairman Su Zhigang, is a leading tourism operator and one of the most successful theme park developers in China. “Chimelong is that rare client and collaborator who puts the guest experience first,” said Ryan Miziker. “Working closely with the great team at Chimelong, we approached each phase of the Journey of Lights parade, from development and fabrication through installation, with a passion for entertaining Ocean Kingdom’s guests. I believe that is Chimelong’s strategy for creating fun, successful and profitable destinations.”

Judith Rubin
Judith Rubin ([email protected]) is a leading journalist, publicist, strategist, blogger, content marketing specialist and connector in the international attractions industry. She excels at writing about all aspects of design and technical design, production and project management. Areas of special interest include AV integration and show control, lighting design and acoustics, specialty cinema, digital video and world’s fairs. Judith has ties to numerous industry organizations. From 2005-2020 she ran communications, publications and social media for the Themed Entertainment Association (TEA). In 2013, she was honored with the TEA Service Award. She was development director of IMERSA, and co-chair of the 2014 IMERSA Summit. She was publicist for the Large Format Cinema Association in the 1990s, now part of the Giant Screen Cinema Association (GSCA) and has also contributed to the publications of PLASA, IAAPA and the International Planetarium Society. Already making her mark as a magazine and book editor, Judith joined World’s Fair magazine in 1987, which introduced her to the attractions industry. Launching as a freelancer in the mid 1990s she has contributed to dozens of publications and media outlets including Funworld, Lighting&Sound America, Sound & Communications, Urban Land, The Raconteur and The Planetarian. She joined InPark in 2010. Judith earned a Bachelor of Fine Arts from Pratt Institute. She has lived in New York City and the San Francisco Bay Area, and now makes her home in Saint Louis, where she is active in the local arts and theater community.
Share
Facebook
Twitter
Linkedin
Email
Print
WhatsApp
Pinterest
ReddIt
Tumblr
Previous articleKraftwerk Promotes Kevin Murphy and Alex Sanfilippo to Executive Positions
Next articleJustice League Unites at Madame Tussauds Orlando