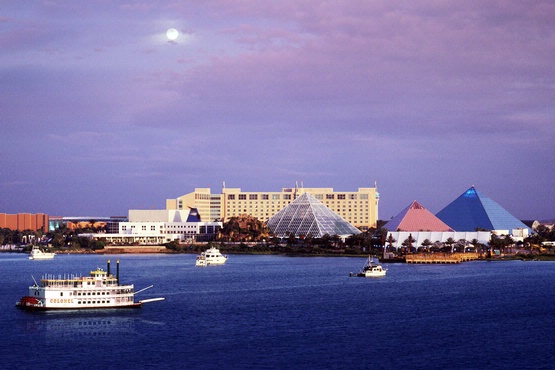 [quote]We’re really proud to have our theater represented as a pioneer in digital cinema and invite all museum executives to visit for a demonstration.” — John  Zendt, CEO of Moody Gardens[/quote]

Galveston, TX, USA (May 13, 2014) — Christie and D3D Cinema are pleased to announce that the world’s first museum-based 4K 3D giant screen 6P laser projection system will be installed and premiering at the Moody Gardens MG 3D Theater in Q4 2014. The system design and configuration will further distinguish Moody Gardens’ theater as one of the world’s most premier cinema venues.

“This is the game-changing milestone that the museum giant screen industry has longed to achieve for many years,” said Don Kempf, president and founder of D3D Cinema. “Moody Gardens’ audiences will be the first in the world to have a 6P giant screen laser experience, unarguably the future of cinema presentation. The DCI and DIGSS-compliant Christie laser solution, coupled with 6P glasses technology, will be unparalleled in terms of image quality. D3D has always been committed to designing first-rate giant screen solutions that are built on a more economically viable business model. It’s a great thrill to be able to achieve this goal AND be first to market with such a premium solution.”

John Zendt, CEO of Moody Gardens agreed. “D3D Cinema has proven time and again that they can deliver the goods first, better and more efficiently. We thoroughly researched all known laser options and the D3D/Christie solution beats the competition across the board – including, significantly, the price. We’ll own this laser system outright, which is important to us, saving significant operating dollars over the life of the laser modules.”

This latest collaboration between D3D and Moody Gardens builds on a longstanding partnership. In January 2011, D3D and Moody co-hosted the first annual Digital Cinema Symposium, showcasing 4K projection technology on a giant screen for the first time, including the first 4K vs. 70mm split screen shootout. The following year, at the 2012 Digital Cinema Symposium, D3D showcased the first 4K 3D demonstration, 11.1 3D audio, high frame rate 3D as well as a prototype laser on a giant screen, all industry firsts. The 2012 event was a milestone, marking the first time that industry professionals overwhelmingly acknowledged a digital presentation exceeded the quality of a 70mm film in a side-by-side comparison. A case study was recently published by D3D & Moody Gardens illustrating the financial benefits and qualitative success of digital presentation and rebranding.

Moody Gardens marks the first giant screen laser deal of many for D3D and Christie. “Lasers raise the bar,” added Kempf. “After Moody Gardens, our first laser dome system is around the corner, which will save our dome clients hundreds of thousands in operating costs per year. The giant screen industry is about to look quite a bit brighter.”

Joe Kleimanhttp://wwww.themedreality.com
Raised in San Diego on theme parks, zoos, and IMAX films, InPark's Senior Correspondent Joe Kleiman would expand his childhood loves into two decades as a projectionist and theater director within the giant screen industry. In addition to his work in commercial and museum operations, Joe has volunteered his time to animal husbandry at leading facilities in California and Texas and has played a leading management role for a number of performing arts companies. Joe previously served as News Editor and has remained a contributing author to InPark Magazine since 2011. HIs writing has also appeared in Sound & Communications, LF Examiner, Jim Hill Media, The Planetarian, Behind the Thrills, and MiceChat His blog, ThemedReality.com takes an unconventional look at the attractions industry. Follow on twitter @ThemesRenewed Joe lives in Sacramento, California with his wife, dog, and a ghost.
Share
Facebook
Twitter
Linkedin
Email
Print
WhatsApp
Pinterest
ReddIt
Tumblr
Previous articleWet ‘n’ Wild Las Vegas Adds Two to Management Roster
Next articleVIDEO: Cattle Dogs Wrangle Elephants at Pittsburgh Zoo