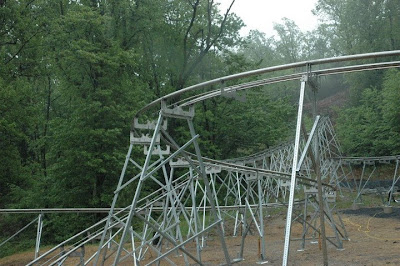 The Mountain Coaster has a 4500’ stainless steel track that’s 38’ up at its highest point, with two 360 degree turns. The coaster is a year round attraction that provides full visibility of the mountains, skiers, swimmers, sun worshipers, Flowriders, bungee jumpers, zip liners and more.

“The Mountain Coaster is on a low impact track that is staked to the ground, providing an environmentally friendly, ecologically sound experience,” explained Ken Ellis, President of Aquatic Development Group and co-owner of Camelback Mountain Resort. “This is the wilderness and it’s important to keep it that way.”

The Mountain Coaster’s system pulls the car, which seats two people (maximum weight 350lbs) up the ski slopes of Camelback on the track. The “up” takes about 5 minutes as guests gain lots of visibility of the area. Then, as riders get to the top, gravity takes over… but they control the speed and the brakes as they head down, gaining maximum speeds of 25 to 30 mph.

“Camelback Mountain Resort is the place for fun 365 days a year. We opened the longest, twin Zip-Flyers in North America in April and now the Pocono Mountains’ only Mountain Coaster,” said Arthur B. Berry III, owner of Camelback Mountain Resort. Berry continued, “We are committed to continually improving our brand and bringing fun for the entire family to the Pocono Mountains.”

Safety is paramount on the Mountain Coaster and is built into the system. Get too close to the car in front of you and the brakes will automatically come on. Take your seat belt off, and again the brakes will come on for protection.

With less than 10 Mountain Coasters now operational in the United States, Camelback Mountain Resort is a leader in providing the newest interactive attractions at year round resorts. The Mountain Coaster joins the twin Zip-Flyers as two new family thrill activities introduced in 2012 as part of a 3 million dollar expansion this year to CBK Mountain Adventures. That follows on the heels of a 3 million dollar expansion at Camelbeach Mountain Waterpark in 2011.

ABOUT CAMELBACK MOUNTAIN RESORT
All of the upgrades and expansions at Camelback Mountain Resort are the brainchildren of the Camelback Mountain Resort’s owners: Skidmore college roommates, Arthur B. Berry III and Kenneth Ellis. Art was an area resident who spent his childhood skiing at Camelback, and Ken followed his father into the swimming pool business, leading the Aquatic Development Group to become the preeminent waterpark builder in the United States. Now in its 49th year, Art and Ken purchased Camelback Resort in 2005. From 1963 to 1998 Camelback was a ski-only resort. Camelbeach Mountain Waterpark opened in 1998, and then upon acquisition by Berry and Ellis, expansion, upgrades and a true commitment to the overall guest experience began, and shape the present and future of the resort. With 800,000 visitors annually, it’s clear that Berry and Ellis have brought a new level of experience, commitment, hospitality and innovation to the Camelback, the Pocono Mountains and the industry. http://www.cbkmountainadventures.com/

Joe Kleimanhttp://wwww.themedreality.com
Raised in San Diego on theme parks, zoos, and IMAX films, InPark's Senior Correspondent Joe Kleiman would expand his childhood loves into two decades as a projectionist and theater director within the giant screen industry. In addition to his work in commercial and museum operations, Joe has volunteered his time to animal husbandry at leading facilities in California and Texas and has played a leading management role for a number of performing arts companies. Joe previously served as News Editor and has remained a contributing author to InPark Magazine since 2011. HIs writing has also appeared in Sound & Communications, LF Examiner, Jim Hill Media, The Planetarian, Behind the Thrills, and MiceChat His blog, ThemedReality.com takes an unconventional look at the attractions industry. Follow on twitter @ThemesRenewed Joe lives in Sacramento, California with his wife, dog, and a ghost.
Share
Facebook
Twitter
Linkedin
Email
Print
WhatsApp
Pinterest
ReddIt
Tumblr
Previous articleSenheiser Offering RF Workshop in NYC August 6
Next articlePolin’s King Cobra Strikes at Six Flags Hurricane Harbor