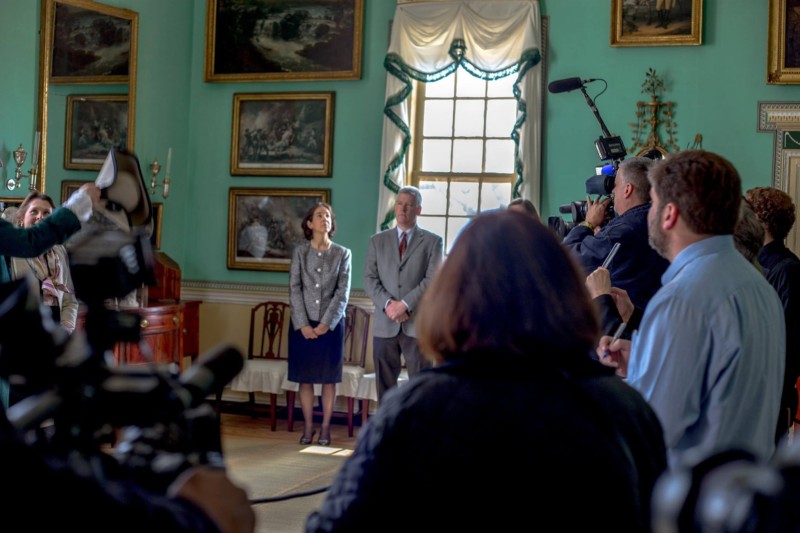 [quote]Washington called this space his ‛New Room’ and it is by any standard one of the great interior spaces of early America, beautifully decorated and furnished to display his vision for the new country.” — Mount Vernon curator Susan Schoelwer[/quote]

Mount Vernon, VA, USA /PRNewswire-USNewswire/ — Officials at George Washington’s home,Mount Vernon, unveiled on March 21 the results of the most comprehensive room research and renovation effort in the 161-year history of the Mount Vernon Ladies’ Association. The “New Room”, the largest and grandest room in George Washington’s Mansion, has taken on a new appearance and a new interpretation.  To celebrate the grand re-opening and reinterpretation of the room, Mount Vernon will display, for the first time in more than 200 years, twenty of the twenty-one pictures that were believed to hang in the space during Washington’s lifetime—including fourteen original Washington-owned works.

Mount Vernon has previously interpreted this room as a formal dining room, but the latest review of the evidence suggests that the Washingtons only occasionally used it for that purpose. Using documentary research and physical evidence, Mount Vernon called upon its in-house historic preservations and collections experts as well as outside authorities in the field to arrive at an unprecedentedly accurate interpretation of the space.

The dining table has been removed, and the walls are heavily adorned with artwork, hung floor to ceiling in gallery style. Visitors are better able to admire the room’s grand architectural details, design finishes, and paintings and drawings on display, just as they might have in Washington’s time.

Visitors will notice numerous changes to the room’s presentation. Although the walls are still a vibrant shade of green, new paint analysis techniques have revealed a more complex and sophisticated color scheme. The paint covering the walls has been re-applied using a special acrylic distemper technique to create a softer, fabric-like finish. The curved cove at the top of the walls is now painted white, and woodwork accents are a deeper khaki color, which Washington described as “buff inclining to white.”

The wallpaper border that accents the space is also slightly different in appearance. Through careful research,Mount Vernon officials were able to match surviving fragments found in earlier restorations of the room to a historic wallpaper pattern in the collections of the Musée des Arts Décoratifs in Paris. By locating this archival pattern, Mount Vernon was able to commission a more complete and accurate reproduction of the original design.

When considering the room’s window treatments, Mount Vernon took a closer look at documentary evidence, including inventory records and Martha Washington’s will. The smaller east and west windows are adorned with white-on-white embroidered curtains, trimmed with green and gold. The room’s large Palladian window has been left bare showcasing this impressive architectural feature.

The $600,000 room restoration project was fully funded by private sources, with significant contributions from Mount Vernon donor groups including the Life Guard Society for Historic Mount Vernon and The Connoisseur Society, along with a generous donation from the Dr. Scholl Foundation. Mount Vernon also secured $100,000 to fund the project through the National Trust for Historic Preservation’s 2013 Partners in Preservation competition. The Mount Vernon Ladies’ Association owns and operates the estate and accepts no government funding.

For more information and to view images of the restoration project, visit MountVernon.org/NewRoom.

Since 1860, more than 85 million visitors have made George Washington’s Mount Vernon the most popular historic home in America. A privately-owned national treasure, Mount Vernon is maintained and operated by the Mount Vernon Ladies’ Association. Since purchasing the estate from the Washington family and assuming stewardship in 1858, the Association has embraced a heroic mission to preserve, protect, and maintain the estate for the American people, relying exclusively on private donations, admission fees, and restaurant and retail proceeds. Through robust education and outreach programs, the Association expands awareness about the exceptional life and character of George Washington, sustaining his legacy through research, interpretation, and public education. In experiences on the estate and through its digital outreach platforms, Mount Vernon strives to preserve George Washington’s place in history as “First in War, First in Peace, and First in the Hearts of His Countrymen.”

With its latest initiative, The Fred W. Smith National Library for the Study of George Washington, Mount Vernon is affirming its status as the preeminent center of learning about George Washington, his life, character of leadership, and legacy. In addition to safeguarding original books and manuscripts, the Library serves as a center for leadership, where scholars, influencers, and other luminaries come together to talk about the past as well as the future, inspired by Washington’s extraordinary life, achievements, and character.

Joe Kleimanhttp://wwww.themedreality.com
Raised in San Diego on theme parks, zoos, and IMAX films, InPark's Senior Correspondent Joe Kleiman would expand his childhood loves into two decades as a projectionist and theater director within the giant screen industry. In addition to his work in commercial and museum operations, Joe has volunteered his time to animal husbandry at leading facilities in California and Texas and has played a leading management role for a number of performing arts companies. Joe previously served as News Editor and has remained a contributing author to InPark Magazine since 2011. HIs writing has also appeared in Sound & Communications, LF Examiner, Jim Hill Media, The Planetarian, Behind the Thrills, and MiceChat His blog, ThemedReality.com takes an unconventional look at the attractions industry. Follow on twitter @ThemesRenewed Joe lives in Sacramento, California with his wife, dog, and a ghost.
Share
Facebook
Twitter
Linkedin
Email
Print
WhatsApp
Pinterest
ReddIt
Tumblr
Previous article
Sea of Surprises Launches at All Three SeaWorld Parks to Celebrate Chain’s 50th Anniversary
Next article
BATMAN the Ride and Colossus Celebrate Six Flags Magic Mountain Anniversaries in Reverse