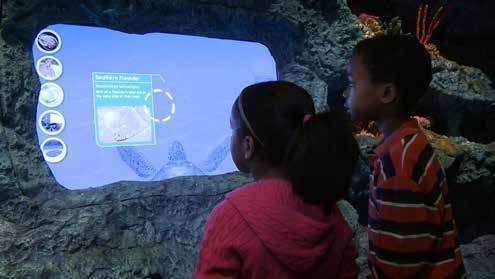 the myth, the mystery and the money behind social media marketing

ABOVE: NatureQuest at the Fernbank Museum of Natural History in Atlanta. Courtesy of Thinkwell

Gamification is seeping into all areas of design, particularly in social networking and online media. For those unfamiliar with the term, I suggest picking up Game-Based Marketing by Gabe Zichermann & Joselin Linder, or the seminal Reality is Broken by Jane McGonigal to add to your reading pile; both offer a unique insight as to how gamification is profoundly changing the rules of consumer engagement.

Put simply, it means using the tools of game design – competition, leaderboards, rankings and rewards – in other forms of user interaction. I recently attended and spoke at the yearly Gamification Summit (www.gsummit.com), and learned how game logic is being added to many things that are decidedly not games – project management software, for instance, that uses leaderboards & badges to track project milestones and encourage efficient team performance. The persuasive, provocative mantra of the summit seemed to be that in ten years it wouldn’t be called “gamification” anymore; it would just be called “good design.”

As a lifelong gamer – I’ve owned every homevideo game system since my beloved Atari 2600 in 1978 – I am excited how video games have fundamentally altered their audiences. It’s clear that a massive generational shift in audience expectation has been rippling through every facet of consumer design for the past few decades, yet in themed entertainment & location-based design, gamification seems to still be in its infancy.

That’s mainly due to momentum – our brickand-mortar products take a while to get to market, so adopting new technologies and philosophies can be a slow and meticulous process. However, location-based attractions offer a unique combination of social activity, spectacle & environment that you can’t get from a game console, tablet or smart phone. Our projects are unique walled gardens, where group interaction and engagement is already part of the experience – creating a massive opportunity for our industry to experiment and innovate with gamification techniques.

In many ways, “gamification” is this decade’s term for “interactivity” – something that attractions have been adding in small doses for quite some time now. Theme parks took early steps into gamified experiences with “shoot-em-up” videogame-style rides like Universal Orlando’s Men in Black: Alien Attack, Disney’s Buzz Lightyear Astro Blasters & Toy Story Midway Mania, and Sally Corporation’s many interactive dark rides at smaller parks around the world. The simple addition of accumulating a score while you ride made these experiences extremely repeatable, and the simple “shooting-gallery” game mechanic made it accessible to gamers and non-gamers alike.

But shooting galleries are only one kind of game, and it’s only the beginning for where themed entertainment is headed. Two recent projects from Thinkwell are good examples of how gamified techniques can be used within location-based environments.

Challenged by the Atlantic City Pier to create a fountain attraction that would draw people to a “dead zone,” a terminus point in their retail development, Thinkwell partnered with Carnegie-Mellon’s Entertainment Technology Center to develop a combination of hardware and software unique to the fountain industry: in addition to hourly, pre-programmed shows, the fountain plays interactive games with the audience. Guests discover these games simply by walking up to the fountain; using multiple imaging and sensing technologies, it responds to guest movements and slowly rewards them with different games as crowds start to gather, from simple “follow me” games with single viewers, to massively multiplayer “color wars” and group dance competitions. While any fountain show would have offered a certain level of attraction, Thinkwell created something that constantly engaged guests in different ways, creating repeatability & word-of-mouth, and raising the value of the retail tenant spaces in the process.

Gamification played a role in the Thinkwelldesigned and -produced NatureQuest at the Fernbank Museum of Natural History in Atlanta, an exhibit recently honored with a Thea Award by the Themed Entertainment Association. The challenge was to engage urban kids of all ages and reading levels with the ecosystems of the US Southeast, inspiring them to get out and explore Atlanta’s amazing urban forests, some of the most diverse and vital in the nation. Rather than typical didactic museum exhibits, NatureQuest’s content is embedded everywhere through a combination of high technology and tried-and-true analog play environments and theatrical techniques, engaging the senses of sound, touch, and sight to immerse visitors in a dynamic, nature-inspired environment. A river of projected fish responds to every step; animal habitats are integrated seamlessly into scenic environments; augmented-reality night-vision goggles reveal unseen nighttime animal activity in the actual environment; RFID-enabled acorns, shells, eggs and fossils reveal what they’ll grow into when placed in front of a magic mirror. And everything designed into the environment is species-accurate to the region, down to the last leaf on every tree. It’s not all about technology, either; instead of the traditional printed descriptions, Thinkwell created scavenger-huntstyle “challenge cards” for many areas of the exhibit. The cards promote active conversations between parent and child as they discover the environment together. While low-tech in nature, these cards can be said to make the entire space “gamified” by virtue of their being infinitely “reprogrammable” to suit such parameters as the visitor’s age or grade level, or the time of day or the season.

Gamification has taken hold in other traditional forms of location-based entertainment, as well. UK-based theater production company Punchdrunk has gained accolades and notoriety (most recently off-Broadway in New York City) with its hit show Sleep No More, an immersive retelling of Macbeth mashed-up with a 1930s film-noir Hitchcockian setting. The audience doesn’t watch from afar – they are literally thrust into the experience, following a cast of 20 through five floors and over a hundred rooms, blurring the line between space, performer & spectator. The action is overlapping, non-verbal, and non-linear; the audience members follow the action & characters at their own discretion, wearing masks that give them social permission to be completely silent, identity-less voyeurs. In effect, Punchdrunk has gamified Shakespeare into a participatory piece of choreography where no two viewers ever have the same experience, and it’s up to the audience to piece together the emotional narrative.

Starting this year, Disney is establishing a whole new kind of theme park experience with the first phases of its “NextGen Initiative,” which embeds interactive, gamified technologies into their existing park experiences. Sorcerers of the Magic Kingdom is a new story-based alternatereality game overlaid on the world’s most popular theme park. At embedded play points throughout the park, visitors use collectible cards to play interactive games, resulting in magical illusions and media moments that unlock a story that pits guests against Disney villains determined to use the forces of evil to take over the Kingdom. Fast Pass Plus will also take Disney’s existing line-reservation up a notch through RFID technology and the ability for guests to pre-book all of their attractions ahead of time. This digital ticket media also functions as room key, resort-wide charge card, and may even trigger gamified surprises throughout the park – a character or attraction that knows your child’s name and birthday, for instance.

All of these cutting-edge experiences suggest that gamification is a potent new tool of engagement and storytelling in the locationbased entertainment designer’s toolbox. The psychology of gamification helps us remove boundaries, creating real-world experiences with layers of content that adapt to guests as they play, or are personalized to their preferences or demographics. Gamification also offers defeatable challenges, often as smaller steps leading to a major achievement, letting us build experiences and stories according to player engagement levels – enticing guest word-ofmouth, collaboration, and repeat business.

As gamification evolves, we can use it to enhance the emotional power of our storytelling in physical places and create lasting, meaningful, repeatable experiences for guests. • • •

Joe Kleimanhttp://wwww.themedreality.com
Raised in San Diego on theme parks, zoos, and IMAX films, InPark's Senior Correspondent Joe Kleiman would expand his childhood loves into two decades as a projectionist and theater director within the giant screen industry. In addition to his work in commercial and museum operations, Joe has volunteered his time to animal husbandry at leading facilities in California and Texas and has played a leading management role for a number of performing arts companies. Joe previously served as News Editor and has remained a contributing author to InPark Magazine since 2011. HIs writing has also appeared in Sound & Communications, LF Examiner, Jim Hill Media, The Planetarian, Behind the Thrills, and MiceChat His blog, ThemedReality.com takes an unconventional look at the attractions industry. Follow on twitter @ThemesRenewed Joe lives in Sacramento, California with his wife, dog, and a ghost.
Share
Facebook
Twitter
Linkedin
Email
Print
WhatsApp
Pinterest
ReddIt
Tumblr
Previous articleWEEKEND VIEWING: InPark’s Top 5 Videos of 2018
Next articleCross pollination