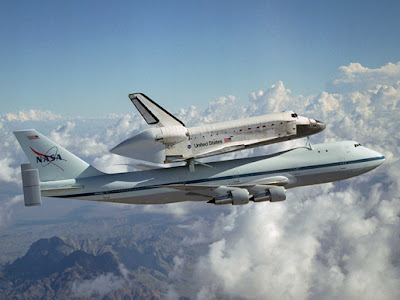 The flight, in cooperation with the Federal Aviation Administration, is scheduled to occur between 10 and 11 a.m. EDT. NASA Television and the agency’s web site will provide live coverage.

The exact route and timing of the flight depend on weather and operational constraints. However, the aircraft is expected to fly near a variety of landmarks in the metropolitan area, including the National Mall, Reagan National Airport, National Harbor and the Smithsonian’s Udvar-Hazy Center. When the flyover is complete, the SCA will land at Dulles International Airport.

Discovery completed 39 missions, spent 365 days in space, orbited the Earth 5,830 times, and traveled 148,221,675 miles. NASA will transfer Discovery to the National Air and Space Museum to begin its new mission to commemorate past achievements in space and to educate and inspire future generations of explorers.

If the flight must be postponed for any reason, an additional notice will be released.

For more information about NASA’s transfer of space shuttles to museums, visit: http://www.nasa.gov/transition

For information about NASA and agency programs, visit: http://www.nasa.gov

Joe Kleimanhttp://wwww.themedreality.com
Raised in San Diego on theme parks, zoos, and IMAX films, InPark's Senior Correspondent Joe Kleiman would expand his childhood loves into two decades as a projectionist and theater director within the giant screen industry. In addition to his work in commercial and museum operations, Joe has volunteered his time to animal husbandry at leading facilities in California and Texas and has played a leading management role for a number of performing arts companies. Joe previously served as News Editor and has remained a contributing author to InPark Magazine since 2011. HIs writing has also appeared in Sound & Communications, LF Examiner, Jim Hill Media, The Planetarian, Behind the Thrills, and MiceChat His blog, ThemedReality.com takes an unconventional look at the attractions industry. Follow on twitter @ThemesRenewed Joe lives in Sacramento, California with his wife, dog, and a ghost.
Share
Facebook
Twitter
Linkedin
Email
Print
WhatsApp
Pinterest
ReddIt
Tumblr
Previous articleThree Nominated to Cedar Fair Board of Directors
Next articleDisney Takes Interactive Animal Kingdom to Facebook