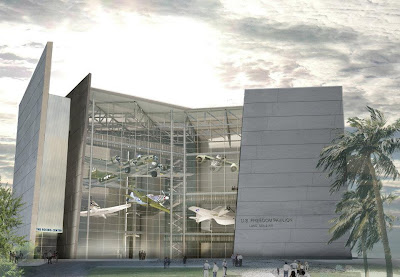 New Orleans, LA, USA (March 22, 2012) /PRNewswire/ — The National WWII Museum marks the next phase of its $300 million expansion at a special morning ceremony March 22 when the uppermost piece of steel framework is installed on the US Freedom Pavilion: The Boeing Center and with a groundbreaking for construction of its next major pavilion, Campaigns of Courage: European & Pacific Theaters.

The two-part event illustrates the rapid pace of growth at the Museum’s six-acre campus and the institution’s central role as an economic force in downtown New Orleans. A sense of urgency underscores the efforts of the Museum’s staff and their many supporters.

“Our goal has always been to complete these projects so that surviving members of the Greatest Generation and their families will be able to see this tribute to their service and sacrifice,” said Museum President and CEO Dr. Gordon H. “Nick” Mueller. “For everyone else, these pavilions will offer an opportunity to learn fascinating stories and personal accounts, see spectacular restored WWII aircraft, and enjoy a hands-on educational museum experience.”

Fittingly, the piece of steel for the US Freedom Pavilion: The Boeing Center will be hoisted aloft bearing the signatures of several dozen WWII veterans, who will be on hand for the ceremonies. Scheduled to open this winter, the $35 million attraction will be home to a broad variety of artifacts that comprised the “big guns” of American military might. These include a restored B-17G Flying Fortress, B-25J Mitchell, SDB-3 Dauntless, TBM Avenger, P-51D Mustang, Corsair F4U-4 and an interactive submarine experience based on the final mission of the USS Tang.

Funds for the US Freedom Pavilion: The Boeing Center came from a $20 million Congressional grant through the United States Department of Defense and $15 million gift from The Boeing Company. This gift from Boeing, which built the B-17, represents the largest private contribution the Museum has received to date. Funding for pavilion exhibits and artifact restoration has been provided by several private donors.

“The swift progress that has been made on this project is emblematic of the unity of spirit, dedication and selfless hard work that won the war on the battlefronts and on the Home Front seven decades ago,” said Dennis Muilenburg, president and CEO of Boeing Defense, Space & Security. “It is great to see the vision of the Museum’s founders come to life as we move quickly toward the opening of this world-class museum as a place where future visitors can gain a fuller appreciation of what so many Americans achieved in World War II and can reflect on what today’s generation of warfighters continue to do for us every day.”

“Activity on the Home Front was vital to the Allied victory in World War II, and Boeing was at the epicenter of that industrial movement, producing more than 19,000 B-17s, B-29s and other essential aircraft,” Mueller says. “The B-17 and other artifacts to be displayed in the US Freedom Pavilion: The Boeing Center, represent the nation’s tremendous industrial capacity and American war-time ingenuity.”

The architectural firm for the US Freedom Pavilion: The Boeing Center is Voorsanger Mathes, LLC and the general contractor is Woodward Design + Build, LLC. Exhibit design is provided by Gallagher & Associates. 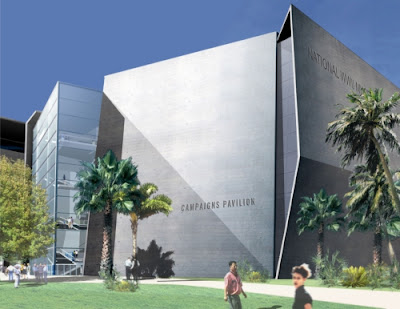 Groundbreaking on the $33 million Campaigns of Courage: European & Pacific Theaters marks the next phase of the Museum’s expansion. The completion date for the pavilion is slated for winter of 2013. The architectural firm for the pavilion is Voorsanger Mathes, LLC and the general contractor is Brice Building Company, LLC. Exhibit design is provided by Gallagher & Associates. Funding for the pavilion is provided by the State of Louisiana Division of Administration, Office of Community Development and the United States Department of Housing and Urban Development. Funding for pavilion exhibits and artifact restoration has been provided by several private donors.

The 31,435-square-foot Campaigns Pavilion will house two galleries which explore the Allied campaigns in Asia and the Pacific and the European Theater. Exhibits will examine the evolving strategy for fighting on two continents while delving into the cultural differences and extreme weather conditions that servicemembers faced. Visitors will receive an imprinted “dog tag” allowing them to follow the journey of an actual participant in the war. Guests will be able to track the actions of their “character” through a number of interactive kiosks throughout the exhibits for a more personal and engaging view of the war.

The final phase of the Museum’s master plan calls for the construction of The Liberation Pavilion (scheduled for 2014), which will focus on the closing months of the war and immediate post war years, as well as an expansive special exhibits gallery. A proposed hotel and conference center as well as a parking structure, if built, will finish out the expansion. Upon completion, the Museum will directly sustain more than 400 jobs and generate $100 million each year in positive economic impact.

The National World War II Museum tells the story of the American experience in the war that changed the world – why it was fought, how it was won, and what it means today. Dedicated in 2000 as The National D-Day Museum and now designated by Congress as America’s National World War II Museum, it celebrates the American Spirit, the teamwork, optimism, courage and sacrifice of the men and women who fought on the battlefront and the Home Front. For more information, call 877-813-3329 or 504-527-6012 or visit www.nationalww2museum.org. Follow on Twitter at WWIImuseum or visit the Facebook fan page.

Joe Kleimanhttp://wwww.themedreality.com
Raised in San Diego on theme parks, zoos, and IMAX films, Joe Kleiman would expand his childhood loves into two decades as a projectionist and theater director within the giant screen industry. In addition to his work in commercial and museum operations, Joe has volunteered his time to animal husbandry at leading facilities in California and Texas and has played a leading management role for a number of performing arts companies. Joe has been News Editor and contributing author to InPark Magazine since 2011. HIs writing has also appeared in Sound & Communications, LF Examiner, Jim Hill Media, and MiceChat. His blog, ThemedReality.com takes an unconventional look at the attractions industry. Follow on twitter @ThemesRenewed Joe lives in Sacramento, California with his fiancé, two dogs, and a ghost.
Share
Facebook
Twitter
Linkedin
Email
Print
WhatsApp
Pinterest
ReddIt
Tumblr
Previous articleIPM at Mitchell Domes (or A Tale of Two Martys)
Next articleSodexo Adds National Zoo to Growing List of AZA Member Parks