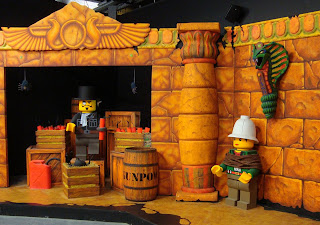 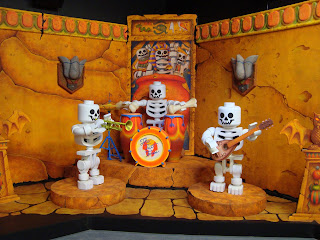 Florida and Malaysia parks to receive Lost Kingdom Adventure
Jacksonville, FL: Following several years of successful operation at the Legoland parks in Carlsbad, California and Windsor, England, Sally Corporation’s popular dark ride, Lost Kingdom Adventure (known as Laser Raiders at Windsor), is set to open at the new Legoland park in Florida in mid-October, and at Legoland Malaysia in early 2012. The interactive, black light rides feature Lego’s Indiana Jones-type character, Johnny Thunder, in an exciting adventure set in an ancient Egyptian temple. The temple walls not only hide a trove of treasure… in a surprise element they also hide a secret, high-scoring bonus target that almost guarantees a win for the rider who zaps it with his or her laser blaster.

The approximately 7,000 sq. ft. (650 sq. m.) black light, ten-scene rides pit guests against the wiles of evil Sir Sam Sinister as they help Johnny Thunder rescue the intrepid reporter Miss Pippin Reed from his grasp, and strive to stop him from stealing the treasure of the ancient temple. Only by hitting the targets scattered throughout the ride can you win this battle.

Based on the client’s experience at the California and Windsor parks, the two new rides have an increased capacity of over 1,000 people per hour; each operating with seventeen four-seater custom Lego-style Jeep ride cars from Bertazzon. Equipped with laser blasters and scoring consoles, the Jeeps carry riders through a monster spider’s lair (where Pippin Reed is trapped in a web), past a performing skeleton band, into Professor Kilroy’s archeology lab, and into the midst of exploding dynamite and the path of a moving, spiked wall—among other hair-raising events. The final scene has a storyline twist and a big, dramatic ending. The new rides also have a few new surprise elements.

“The rides feature some of Lego’s most popular characters, and are fun and not too scary for young children,” says Legoland Senior Project Director Ian Sarjeant. “They have proven to be very popular at both the California and Windsor parks: Incorporating the ride into our new parks was an easy decision.”

Ray Dominey, Sally Corporation’s vice-president of technical services, installed the secret bonus target as an exciting added surprise for guests. “When a guest hits the special bonus target, an additional 7,007 points will show up on their score,” Dominey says. “When you see the final number, seven, on the console, you know you hit it: every other target score ends in zero. There are ninety targets in the ride, and there’s no way to tell which is the special one—until you hit it.”