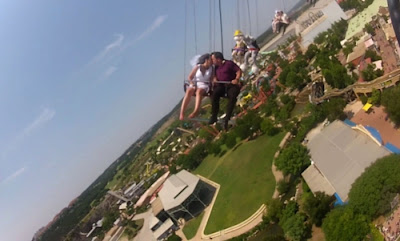 San Antonio, TX, USA (May 25, 2012) /PRNewswire/ — Brides and grooms soared into their future together on the all-new SkyScreamer at Six Flags Fiesta Texas. The park hosted a special high flying wedding ceremony to celebrate the tower ride’s grand opening. Festivities included live entertainment, photos, and a special wedding reception for the couples and their wedding guests. SkyScreamer will open to park guests Sunday, May 27.

Towering 200 feet above the ground, SkyScreamer will surpass the height of the park’s quarry walls. Thirty-two guests will board the ride and sit two across in open air swings as they are raised to the top of the SkyScreamer tower while spinning round and round. At full swing, guests will soar in a 98-ft. circle at speeds of 40 mph with the rest of the park far below their dangling feet. By day, guests will have an aerial view for miles past the cliff walls and provide exciting views of downtown San Antonio.

“SkyScreamer will provide a breathtaking, panoramic view towering above our unique park setting. From the vantage point of these thrilling, open-air swings, guests will have an unusual birds’ eye perspective of the San Antonio skyline as they soar to new heights,” said park president Martin Bozer.

In addition to boasting a full lineup of thrilling rides, Six Flags Fiesta Texas is America’s favorite show park. Take a trip back to when Rock-and-Roll was young, saddle shoes were the rage and poodle skirts were in fashion during Rockin’ at Rockville High — 20th Anniversary. Set in the Rockville High Theatre, this nostalgic ’50s era show tells the story of teenage love, school spirit and dreams from a simpler time. Inspired by the original ’92 production this show features classic music of the time.

Go Fireworks! Go Six Flags Fiesta Texas! Experience a salute to Texas unlike any other as with the Lone Star Nights Laser and Fireworks Celebration. With remarkable pyrotechnics and special effects, there’s no better way to end your night than with a bang! Broadcast on a football field-sized section of the park’s quarry walls, the production includes enhanced video projection, new lasers, audio, custom pyrotechnics and special effects. The celebratory storyline is a salute to the Lone Star State of today, highlighting the various cultures, places and people that make Texas unique. Lone Star Nights Laser and Fireworks Celebration will be featured Saturdays and Sundays and nightly summer operation beginning June 9.

Joe Kleimanhttp://wwww.themedreality.com
Raised in San Diego on theme parks, zoos, and IMAX films, InPark's Senior Correspondent Joe Kleiman would expand his childhood loves into two decades as a projectionist and theater director within the giant screen industry. In addition to his work in commercial and museum operations, Joe has volunteered his time to animal husbandry at leading facilities in California and Texas and has played a leading management role for a number of performing arts companies. Joe previously served as News Editor and has remained a contributing author to InPark Magazine since 2011. HIs writing has also appeared in Sound & Communications, LF Examiner, Jim Hill Media, The Planetarian, Behind the Thrills, and MiceChat His blog, ThemedReality.com takes an unconventional look at the attractions industry. Follow on twitter @ThemesRenewed Joe lives in Sacramento, California with his wife, dog, and a ghost.
Share
Facebook
Twitter
Linkedin
Email
Print
WhatsApp
Pinterest
ReddIt
Tumblr
Previous articleTEA and AECOM to release TEA/AECOM 2011 Theme Index: Global Attractions Attendance Report
Next articleUSA Pavilion at Yeosu Expo 2012 Welcomes 100,000th Visitor