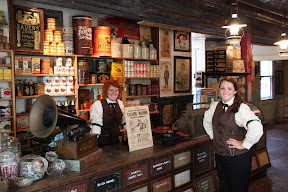 Photo courtesy Alcorn McBride
Orlando (December 13, 2011) – It may be a recreation of a bygone era’s general store, but The Oldest Store Museum Experience in St. Augustine, Florida is utilizing cutting-edge Alcorn McBride products to deliver a snapshot of turn-of-the-twentieth-century shopping.

The former C.F. Hamblen Hardware store, a St. Augustine fixture since 1875, became a museum in 1963 and was acquired by Historic Tours of America, which operates tours in six cities, in 2002. At that time it was moved into a new location and its space enlarged to about 4,000 square feet. In preparation for the museum’s relaunch and grand opening last July interactive elements were added to the experience. Ryan McCurdy, who handles show control for Historic Tours of America, opted for Alcorn McBride equipment, which he had previously used on Savannah’s popular Ghosts & Gravestones tour.

The first room visitors see is the traditional general store with a clerk standing behind a counter. A fast-talking presenter in the guise of a snake oil salesman attempts to sell the visitors the latest in c. 1900 goods and technology, from patent medicine to an Edison Cylinder Music Player, cream separator and milkshake maker.

Motion sensors pick up the visitors as they migrate to the next room where the store owner is caught dozing – subtle sounds of buzzing flies and snores can be heard courtesy of Alcorn McBride’s AM4 digital audio machines.

Next stop is the butcher shop where an audio animatronic butcher, controlled by an Alcorn McBride V4 Pro, cuts into a slab of bacon and recites the meat prices of the day. Again, flies are heard and chickens rattle their cages.

The warehouse follows, packed with exhibits. Video kiosks are spread throughout the environment, all the screens housed inside produce boxes. The warehouse manager takes over the tour, making his presentation from a stage where he steps on concealed buttons and the V4 Pro supports his sales pitches and stories, including a history of bicycles as one is lowered from the ceiling.

Visitors next explore a hallway lined with washing machines through the ages. Motion sensors trigger the V4 Pro, which cause the machines to shake, rattle and even spit out a cloud of bubbles.

The final stop finds visitors looking at portraits on the wall when the painting of C.F. Hamblen comes to life and relates the story of his shop. “The V4 Pro controls the DVM HD in the control room,” says McCurdy. “The portrait video and audio comes from the DVM; we chose the DVMHD because it enabled us to use HDMI and only one cable. We’ve masked the monitor so it looks like a painting – after the motion sensor is triggered the portrait is still frozen for a minute to allow surprise to build. Then Hamblen does some subtle things and begins to talk.”

As visitors leave they exit through a room with three synchronized screens showing photos of the store. The V4 Pro turns the screens on in the morning and allows them to stay frame accurate all day, McCurdy reports.

“The Alcorn McBride equipment used throughout the Oldest Store Museum Experience has been working great,” he adds.

Joe Kleimanhttp://wwww.themedreality.com
Raised in San Diego on theme parks, zoos, and IMAX films, Joe Kleiman would expand his childhood loves into two decades as a projectionist and theater director within the giant screen industry. In addition to his work in commercial and museum operations, Joe has volunteered his time to animal husbandry at leading facilities in California and Texas and has played a leading management role for a number of performing arts companies. Joe has been News Editor and contributing author to InPark Magazine since 2011. HIs writing has also appeared in Sound & Communications, LF Examiner, Jim Hill Media, and MiceChat. His blog, ThemedReality.com takes an unconventional look at the attractions industry. Follow on twitter @ThemesRenewed Joe lives in Sacramento, California with his fiancé, two dogs, and a ghost.
Share
Facebook
Twitter
Linkedin
Email
Print
WhatsApp
Pinterest
ReddIt
Tumblr
Previous articleWinter’s Dolphin Tale Adventure Attraction Opening in Conjunction with DVD Release of Hit Film
Next articlePremier Rides to Supply Newest Coaster to Six Flags Discovery Kingdom