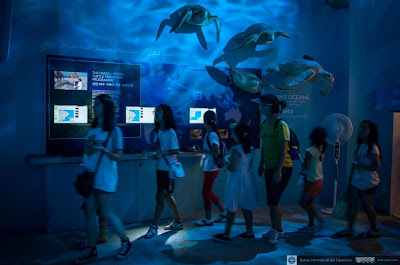 Yeosu, South Korea — The Sultanate of Oman’s pavilion at Expo Yeosu 2012 in the Republic of Korea got the gold medal for the Best Theme Development for reflecting the exhibition’s theme of ‘The Living Ocean and Coast’.

HE Mohsin Bin Khamis Al Balushi, Adviser at the Ministry of Commerce and Industry and the Commissioner-General of the Sultanate’s pavilion at Expo Yeosu 2012, received the award at a ceremony organised by the International Exhibitions Bureau (BIE) to hand over the prizes for the best pavilions.

Al Balushi said the award reflects the efforts of individuals, government institutions and private sector establishments in the Sultanate. It reflects the Sultanate’s achievements in environment conservation and the Royal attention of His Majesty Sultan Qaboos Bin Said in this regard, he said in a statement.

The award is an honour for all those associated with the Sultanate’s pavilion, its design, and display, he said. The evaluation committee to select the winners included specialists in environmental science and exhibitions. Balushi said it is a neutral panel that has nothing to do with the host country or BIE.

HE Mohammed Bin Salim Al Harthy, Sultanate’s Ambassador to South Korea, said the award is a culmination of the efforts of the ministerial committee, the technical committee, the sub-committees and participating teams. He said the award will boost the Sultanate’s standing internationally and contribute to boosting its ties with other countries. It will also boost the Sultanate’s tourism ties and attract investment in various fields.

The Sultanate’s pavilion showcases aspects of the Omani man, his heritage and features through audio, visual and print means.

The 786sqm pavilion is inspired by the traditional Omani environment and highlights the history and culture of its people, especially in marine discoveries. The six sections at the pavilion showcase Oman’s role in preserving its marine wealth and natural resources.

The pavilion’s area for receiving visitors has touch screens that give information on Oman’s rich marine history and culture and its plans to address threats to marine environment.

Also showcased are traditional miniatures of ‘Al Ghanja’ vessel, the entrance of the old districts of the Wilayat of Muttrah and the traditional ‘Areesh’ made of date palm fronds. 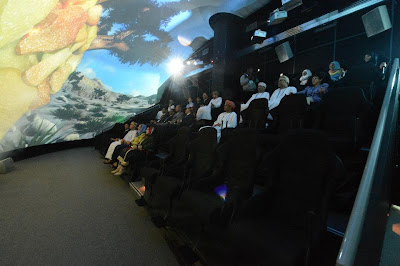 The 44-seat 4D movie theatre has a semicircular screen and hi-tech sound and music system. The theatre screens short documentaries on the Sultanate’s marine wealth and preservation of its natural resources. LM Productions designed, installed and operated the theater during the Expo as well as created all the content in house from concept / story-boarding through to the end result.

Al Balushi honoured local staff who operated the Sultanate’s pavilion at the exhibition.

Joe Kleimanhttp://wwww.themedreality.com
Raised in San Diego on theme parks, zoos, and IMAX films, Joe Kleiman would expand his childhood loves into two decades as a projectionist and theater director within the giant screen industry. In addition to his work in commercial and museum operations, Joe has volunteered his time to animal husbandry at leading facilities in California and Texas and has played a leading management role for a number of performing arts companies. Joe has been News Editor and contributing author to InPark Magazine since 2011. HIs writing has also appeared in Sound & Communications, LF Examiner, Jim Hill Media, and MiceChat. His blog, ThemedReality.com takes an unconventional look at the attractions industry. Follow on twitter @ThemesRenewed Joe lives in Sacramento, California with his fiancé, two dogs, and a ghost.
Share
Facebook
Twitter
Linkedin
Email
Print
WhatsApp
Pinterest
ReddIt
Tumblr
Previous articleHawaiian Dome Fest to Showcase Fulldome
Next articleSteve Schklair is back in the realm of special venue, and he’s got the 3ality Technica 3D toolkit behind him