Once Upon a Shuttle 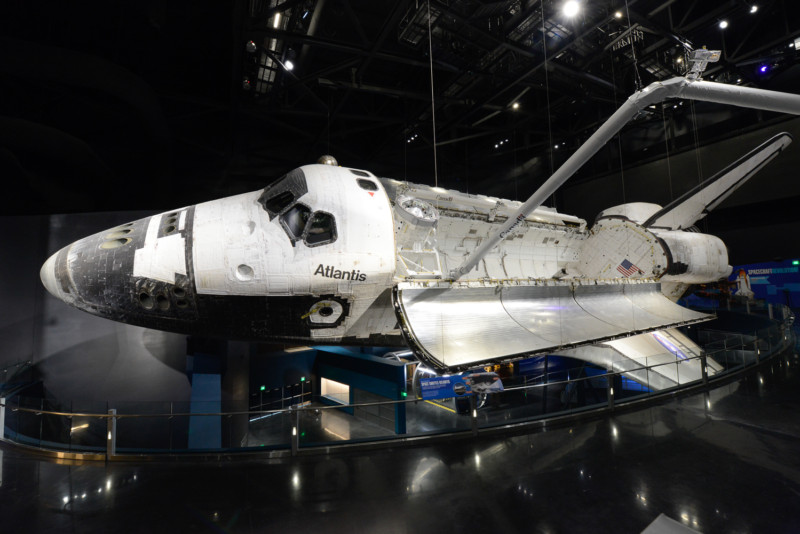 by Ben Cober, director of business development and research for PGAV Destinations

Doug Nickrent of PGAV Destinations is the chief exhibit designer for the new Space Shuttle Atlantis attraction, opened at the Kennedy Space Center this June. Nickrent is spinning stories throughout the entire new 90,000 square foot exhibit space in an attempt to capture just a glimpse of the millions of inspiring stories that weave together to tell NASA’s tale. “In our opinion, the role of a science center is to inspire, motivate, and interest its guests and generate lifelong curiosity in the subjects it teaches,” says Nickrent. “Museums have been adopting ways to tell their stories in personal, exciting ways that keep guests connected.” He explains that it shouldn’t be that a child just walks away knowing how a shuttle lands, but that the child should be amazed at how a shuttle lands and wants to learn more.

For any of us who’ve tried to recount an adventure to family over dinner or tell the truth about the size of the fish we caught, we know that telling a good story isn’t simple. There are no sure-fire formulas, no outlines – because each story is unique. “It’s about finding the drama, not just the facts – what are the essence and emotions of the story?” says Nickrent.

Emily Howard, project manager of the new orbiter home exhibits, explains that just as there are many vehicles to get astronauts around space, there are many vehicles to tell stories in the Atlantis attraction. NASA’s stories are told through movies, theatrical presentations, fun interactives (like the orbiter simulator), docents who help explain concepts, and traditional graphics and text. “Different ages, genders, and cultures have different ways of learning,” says Howard, “and by presenting these stories in a variety of ways, the lessons become more inclusive for everyone.”

Every good story has a theme (this story’s theme is ‘storytelling’), so what themes are found throughout the new Atlantis attraction? First and foremost is that the orbiter Atlantis is a hero – a revolutionary vehicle that overcame millions of challenges to exist and work (it’s a rocket, a space craft, a glider – even a temporary home and a laboratory). Another is that the entire program is made up of people – very driven, passionate, brilliant, and real people – what are their stories? The new exhibit also tells a lot of stories about training for missions; because when you boil it down, astronauts spend a much greater portion of their time in training simulators rather than in space. Lastly, the new exhibit tells a lot of stories about speed – as the shuttle and astronauts sail around Earth at more than 17,000 m.p.h., the notion of “floating through space” just simply doesn’t exist. 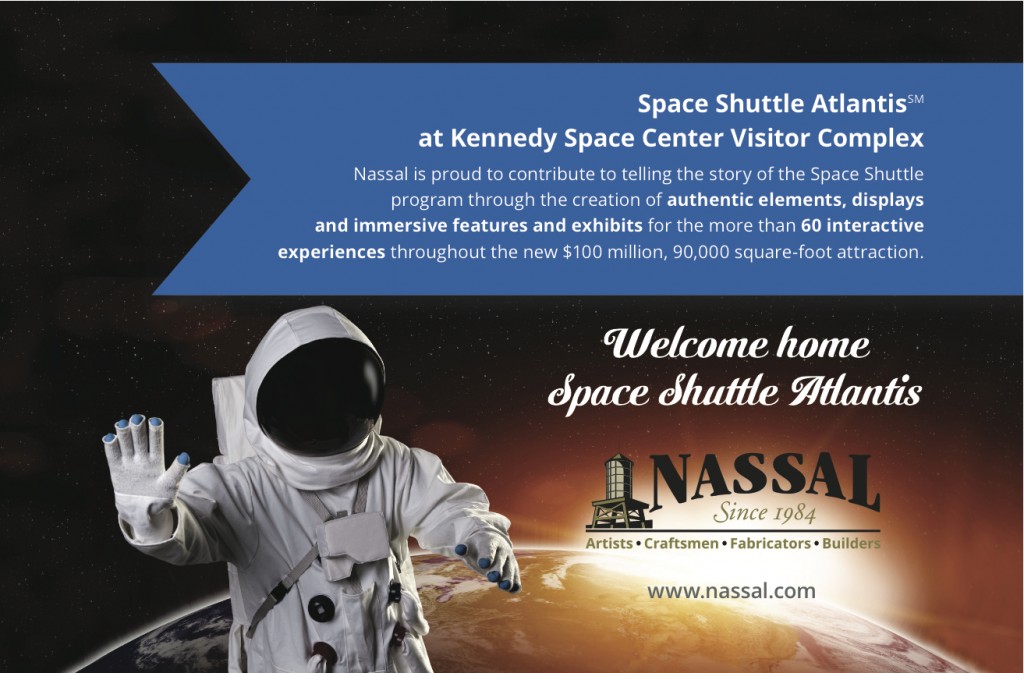 Telling stories is not a revolutionary idea for NASA – just ask the rover Curiosity that has been Tweeting from Mars since it landed last fall. “The challenge with NASA’s stories is that they’re incredibly high level, extremely technical and deep,” says Howard. “So our job was to transform these complicated stories in a fun and compelling way that both a child and your grandmother, who know little to nothing about space, can understand and enjoy them.” At the same time, exhibits need to be accessible to the space and science lovers, and provide in-depth enough material that they can stay highly engaged and fascinated. “It’s a really challenging balance,” says Nickrent, “but not impossible.”

Hundreds of stories are told throughout the exhibit, “there’s more drama in NASA’s history than people realize,” says Nickrent. The restoration and maintenance of the Hubble Telescope was incredibly dangerous and challenging, full of tragedy and victory. What looks like the simple act of landing a shuttle back on Earth is a hair-raising, nail-biting experience for everyone involved. There are 50,000 individual pieces just for the heat shield on the underside of the shuttle to protect it from burning up on re-entry – and each of the millions of pieces of the shuttle has a story and people behind those stories. 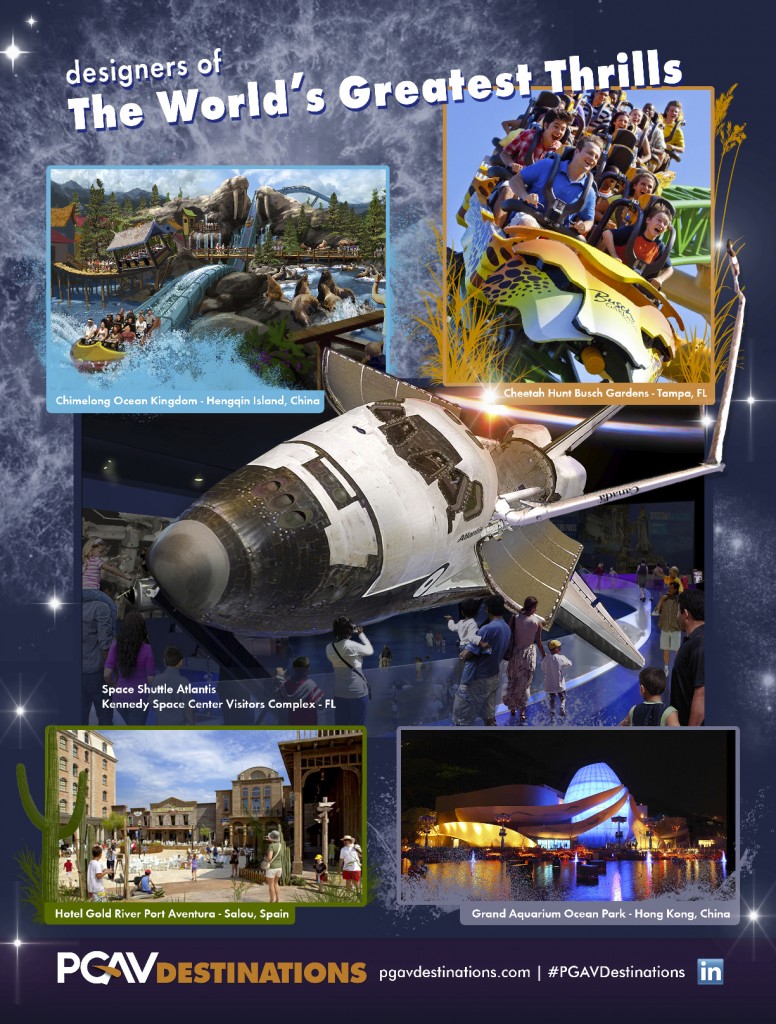 [box] Bringing it all together: Nassal creates immersive features and exhibits for new attraction

From converting standard-sized images into awe-inspiring supersized wall coverings to the coordination and creation of a full-scale reproduction of the Hubble Space Telescope, The Nassal Company played a key role in creating virtually every visual and interactive experience visitors will enjoy at Space Shuttle AtlantisSM ,the world’s most comprehensive and interactive attraction devoted to NASA’s 30-year Space Shuttle Program. Nassal’s involvement in the project spanned 18 months, with the company collaborating with industry leaders to create authentic elements, displays and immersive features and exhibits for more than 60 interactive experiences. “This was an interesting project because the space shuttle program is historic, so we had to represent every facet as both authentic and interactive.” said Marc Kish, Nassal’s project manager on Space Shuttle Atlantis. “We worked with the best and brightest to ensure that the design intent of the project was realized.” Among the highlights of Nassal’s contributions to the attraction: Billboard-size enlargements of Atlantis photos Visitors to Space Shuttle Atlantis will quickly find themselves immersed in the Atlantis story when they view the supersized photographs of the spacecraft on Earth and in space. Nassal took standard-sized images of Atlantis and digitally stretched them, with one image in particular measuring over 1,400 square feet. The painstaking process required each image to be digitally manipulated in sections so every detail could be enhanced for enlargement and rebuilt into digital file sizes as large as 15 gigabytes. Full-sized replica of Hubble Space Telescope Nassal collaborated with Guard-Lee, a manufacturer of aerospace replicas, on re-creating the Hubble Telescope as it would appear in space. Measuring 43 feet long and 14 feet in diameter, the replica is the star attraction of the Hubble Space Telescope Theater. Replica “Astrovan” The search for authenticity took Nassal to Chattanooga, Tenn., to find an Airstream trailer that could become a convincing reproduction of the “Astrovan” that carried astronauts to the launch pads. The transformation of the Airstream included a reconfiguration of doors and windows as well as being cut in half. Visitors will find the replica Astrovan while shopping in the Shuttle Express gift shop. Relocating a 8,000-pound shuttle engine Progress could be measured in inches as Nassal’s project team safely hoisted over two days a shuttle engine weighing nearly 4 tons up three levels of pedestrian ramps to its new home in Space Shuttle Atlantis. The engine, which flew in the maiden voyage of the Challenger, had been on display at Kennedy Space Center Visitor Complex since 1997. “We’re so proud to have been able to contribute to Space Shuttle Atlantis,” said Bill Nassal, Partner of The Nassal Company. “Creating a true partnership with Delaware North and PGAV Destinations, we are very honored and excited to be a part of the team to help bring the story of NASA’s Space Shuttle Program to life.” • • • [/box]

Nickrent and Howard came away from the project with their own life-changing stories. “When I was a kid, I watched every launch – Gemini, Apollo, Skylab – and I missed the first shuttle launch and regret it to this day,” says Nickrent. “So when I was with a video crew for the Atlantis rollout for STS 135, the final Space Shuttle mission, I had to pinch myself. As we went into the night, the officials just kept letting us do more and more – walk with the crawler,  stand on the launch pad, film from the launch gantry – I had to keep saying, ‘really, we can do that?!’” Howard had the chance to get even closer to Atlantis – inside it in fact – as NASA allowed her to sit inside its cockpit before its final flight in 2011. “They let us sit in the pilots’ seats and wear the bunny suits,” says Howard. “It just fills me with pride – the new home for Atlantis almost feels like your child – you’ve worked so hard, watched it develop and grow, and you just know it’s going to impact generations for years to come.”