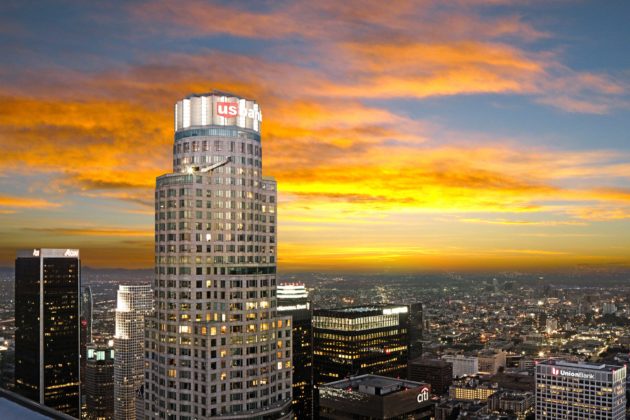 The all-new OUE Skyspace LA is California’s tallest open-air observation deck at almost 1,000 feet above downtown Los Angeles, and the premiere destination for 360-degree views of the city, stretching from the Hollywood Hills to the Pacific Ocean.

The OUE Skyspace LA experience includes a variety of interactive visitor touch points on floors 2, 54, 69 and 70. Besides taking in the spectacular panoramas from the two-story observation deck on the upper floors, visitors can view the city like never before on the thrilling Skyslide attraction. Made entirely of clear glass, 1 1/4 inches thick, the Skyslide is a first-of-its-kind outdoor glass slide affixed to the exterior of U.S. Bank Tower, extending 45 feet long from floor 70 to floor 69, offering visitors a truly unparalleled experience.

OUE Skyspace LA is part of the comprehensive asset enhancement works spearheaded by OUE to transform the U.S. Bank Tower, which it acquired in 2013, from a commercial building into a vibrant business, social and tourist destination. Works on the observation deck and Skyslide began in December 2014, which cost approximately US$31 million.

Also completed is the over US$ 26 million makeover of the office lobby, which now features one of the country’s largest high-resolution video art walls in an office building.

“We are pleased to be celebrating the completion of the asset enhancement at U.S. Bank Tower. Representing the pinnacle of the building’s transformation, OUE Skyspace is poised to become a prominent tourist attraction and firmly positions U.S. Bank Tower as the undisputed icon on the Los Angeles skyline,” said Dr Stephen Riady, OUE’s Executive Chairman.

Echoing this sentiment, Lucy Rumantir, President & Chief Executive Officer, The Americas, OUE said, “The opening of OUE Skyspace LA will breathe new life into LA’s tallest landmark. Its unique offerings will provide local residents as well as tourists an opportunity to experience the city from an exciting new perspective.”