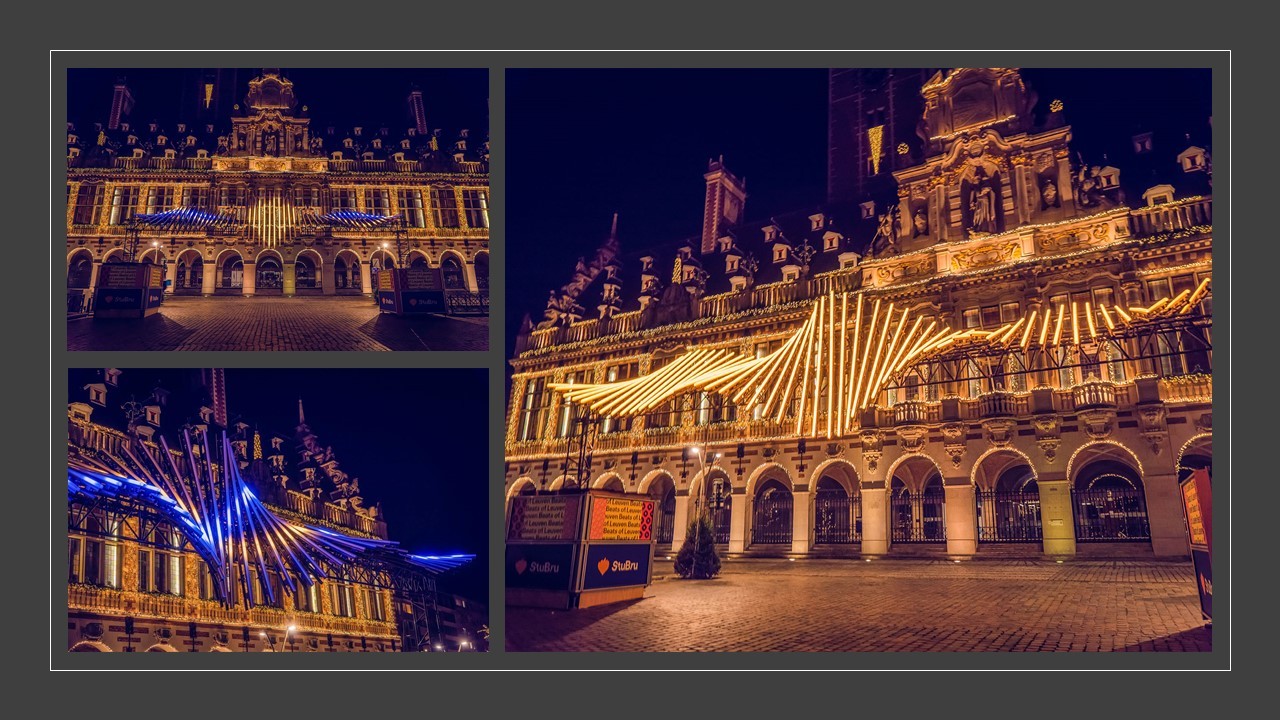 Belgian-based creative lighting and multimedia design specialist Painting with Light imagined and realized an eye-catching light artwork in the city of Leuven. The popular Belgian Radio station Studio Brussel (StuBru) commissioned the work in support of their broadcasting for The Warmest Week (De Warmste Week). This yearly charity fundraising event, symbolized with a flame, takes place around Christmas to raise awareness and support the lonely and weaker fellow-citizens in society, or everyone that needs cheering up. Solidarity actions across Belgium range from sending post cards to donating toys, baking pancakes and anything else to support the many good causes.

This year’s edition of The Warmest Week was presented in a more subtle format due to pandemic restrictions. Studio Brussels broadcasted from 20 ‘warm places’ around the city of Leuven for this week, playing people’s favorite songs. The light art display installed by Painting with Light became a visual focal point that visually reinforced this action. The dancing soundwaves effect in blue and gold lighting gave the impression that the installation was reacting each time a StuBru listener called or sent a request in for a song to honour a special person who had helped, influenced, inspired or meant a lot to them during the past year.

As part of three light art installations across the city, Painting with Light built the light installation at the Ladeuze square, in front of Leuven’s Catholic University Library. The building features neo-Flemish-Renaissance architecture and holds over four million books and manuscripts. The main objective was to create a spirit-lifting installation that was fun, danced with the music and was filled with positive forward-looking energy, representing hope for everyone during these tough pandemic times. The installation had to add some aesthetic magic to the immediate environment and be able to run in harmony with the music station in a subtle way, standing out but without drawing so much attention to itself that crowds stopped to gather.

The Painting with Light team was challenged to create and deliver the design and control system extremely quickly, meeting a deadline of just under three weeks. Beats of Leuven was built with a Chauvet pixel-mapping one-meter-long LED strip, featuring 50 LEDs under a 125º viewing angle. These were chosen as a robust, cost-efficient solution with quality output and colours. The ÉPIX Strip IPs were rigged in an angled arrangement creating some elegant looks on a special metal scaffolding framework – also designed by Painting with Light – and erected across the street in front of the Library, creating the optical illusion from further away that it was attached to the building. The Painting with Light team also created custom video content to play through the fixtures.

The final signature look was a gentle, elegant, fluid repeat double-wave pattern cycling through two different color ranges – blue and gold – which was replayed while a flame effect – representing the Warmest Week flame symbol – flared up every two to three minutes. The flame effect gave the impression that the installation was reacting each time a StuBru listener called or sent a request in for a song to honor a special person.

Painting with Light CEO Luc Peumans comments: “This was a fantastic project for us! We received many great comments from around the world relating to this light art installation with such a warm purpose during these harsh times! So big kudos to our team and suppliers who helped make an amazing creation happen at such short notice – from tender to delivery in less than four weeks!”

Steps taken towards LEGOLAND in Belgium