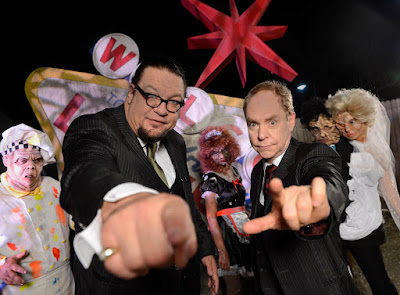 For more than 35 years, Penn & Teller have redefined the magic genre, specializing in gory vaudeville-like tricks, exposing frauds and performing inconceivable stunts live in front of sold-out crowds. And now, they’re partnering with the designers at Universal Orlando’s Halloween Horror Nights to infuse their brand of entertainment in a complete haunted house environment – something they have never done before.

Best known for their satirical humor, outrageous antics and mind-blowing magic, including their famous “The Magic Bullets” trick (where the duo catch bullets in their teeth), the pair has entertained guests at Las Vegas’ Rio All-Suite Hotel & Casino for more than 10 years, making their act one of the longest running shows in Las Vegas history.

This fall, Penn & Teller invite Halloween Horror Nights guests to step into a dark, dilapidated and radioactive version of “Sin City,” as if one of their magic tricks has gone terribly awry and the city has been covered in nuclear ooze. Concepted by the duo themselves, the maze will feature the best of Vegas – showgirls, slot machines, little white wedding chapel, all-you-can-eat buffet, and more – all glowing with a toxic green hue.

“Universal Horror Nights can scare the living Elvis out of you, and me & Teller, well, we’ve been known to take things a bit too far. Now we’re working together on showing you what it would be like to live in a post-nuclear explosion Sin City. C’mon by, but remember, you’re not playing with children here,” said Penn Jillette, the larger, louder half of the duo.

“We’ve done more than just tap into the wildly creative minds of Penn & Teller, the most influential illusionists in the world. We’ve been working really closely with them. You are literally going to hear Penn directing you through this toxic wasteland before coming face-to-face with both Penn & Teller in this jarring 3D experience,” said Jim Timon, Senior Vice President of Entertainment at Universal Orlando Resort.

Penn & Teller have earned an impressive 13 Emmy Award nominations for their long-running Showtime series, “Penn & Teller: BS!” They have also written three New York Times best-sellers and had two successful Broadway show runs. They’ve both also recently appeared on numerous television shows, including “Celebrity Apprentice,” “Dancing With The Stars” and “Top Chef;” and were selected to receive a star on the Hollywood Walk of Fame in 2013.

Universal Orlando’s Halloween Horror Nights has a more than 20-year history of creating an incredibly entertaining, horrifying Halloween experience that is consistently rated the nation’s best. The event features highly-themed, disturbingly real haunted houses based on everything from film to nightmares — and streets filled with hundreds of specially-trained “scareactors.”

There are many ways to enjoy your Orlando vacation, but there is only one place where vacation becomes adventure: Universal Orlando Resort. It is a unique destination featuring two theme parks, three magnificently themed on-site hotels and a nighttime entertainment complex. It’s the only Orlando destination where you are not just entertained – you become part of the most exhilarating entertainment ever created. You can soar above Hogwarts with Harry Potter, swing above the streets with Spider-Man, be transformed into a banana-loving minion in the hilarious and heartwarming Despicable Me Minion Mayhem ride and help Shrek save Princess Fiona in Shrek 4-D.

Joe Kleimanhttp://wwww.themedreality.com
Raised in San Diego on theme parks, zoos, and IMAX films, Joe Kleiman would expand his childhood loves into two decades as a projectionist and theater director within the giant screen industry. In addition to his work in commercial and museum operations, Joe has volunteered his time to animal husbandry at leading facilities in California and Texas and has played a leading management role for a number of performing arts companies. Joe has been News Editor and contributing author to InPark Magazine since 2011. HIs writing has also appeared in Sound & Communications, LF Examiner, Jim Hill Media, and MiceChat. His blog, ThemedReality.com takes an unconventional look at the attractions industry. Follow on twitter @ThemesRenewed Joe lives in Sacramento, California with his fiancé, two dogs, and a ghost.
Share
Facebook
Twitter
Linkedin
Email
Print
WhatsApp
Pinterest
ReddIt
Tumblr
Previous articleGallegos Exits Thorburn Associates
Next articleThemed Attractions and Resorts Sdn. Bhd. announces Puteri Harbour Family Theme Park (Malaysia) opening November 2012