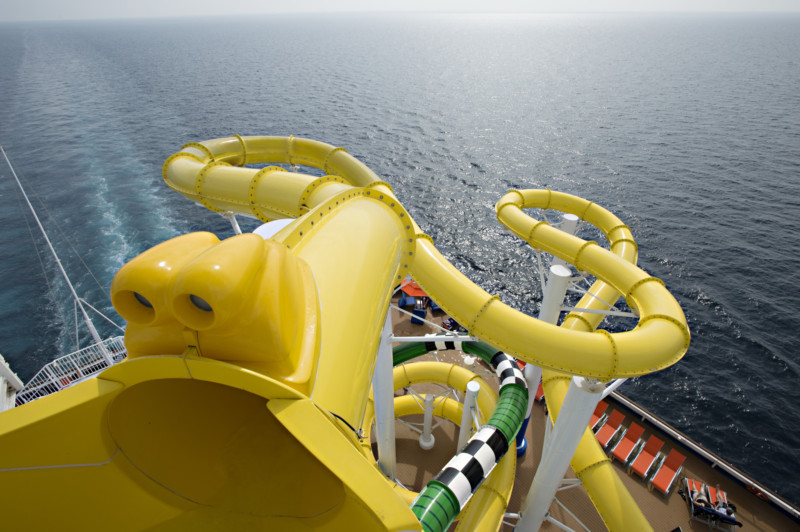 With over 2,000 waterpark installations Polin has global experience and a unique perspective

Let’s talk a bit about Polin’s history. When was the company founded?

Polin was founded by Enver Pakis in Istanbul in 1976. Enver received undergraduate and master’s degrees in Architecture from Istanbul Technical University. After graduation, he worked at Pirelli as an architect for 5 years and then decided to establish his own company. The company produced GRP (fiberglass products) for the construction industry. They manufactured composites like air conditioning cabins, water tanks, and roof decorations. In the 1980s, when Turkey moved to an open economy and holiday villages were being built, Polin started producing waterslides. 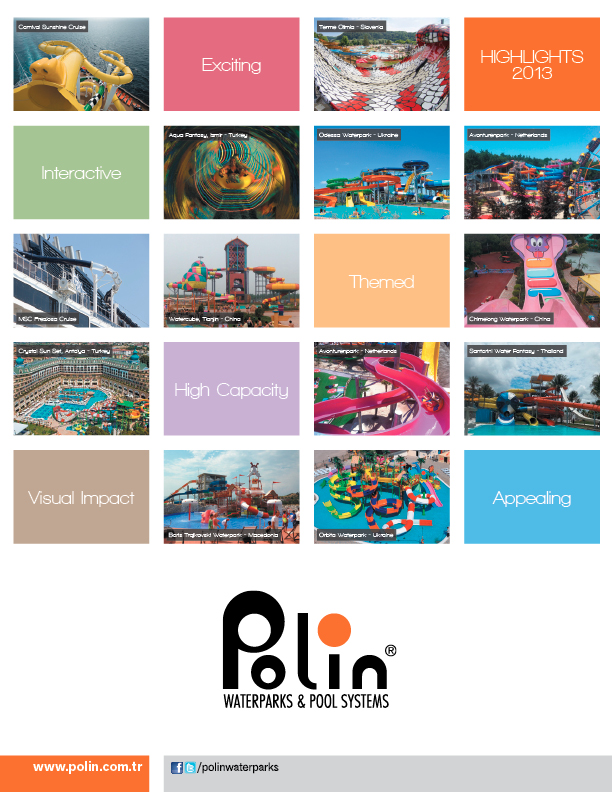 What were some of the first projects/clients?

When we started the waterslide business, our first slides went to Germany, Austria and Switzerland. We consider this fortunate since German standards are some of the strictest in Europe and from the very beginning our slides complied with DIN and TUV norms (for safety standards and testing methods). We then started to expand in Eastern Europe. On the Black Sea Coast of Russia, for example, you can find a Polin waterpark in each city. Then we continued to expand throughout Europe, North Africa, Asia and America.

How big is the company today?

Polin has a very high plant capacity. We continue production in three existing plants in Turkey. Our fourth facility will be open by the end of this year. We have a team of 400 people dedicated to the waterslide industry at headquarters. We have five offices: Polin Russia, Polin Morroco, Polin China, Polin Colombia and Polin Macedonia and together with our offices our team is 500 people.

Today Polin is one of the leaders in design, production and installation of waterparks, waterslides and water play attractions. We have more than 2,000 waterpark projects in over 82 countries around the World. Today Polin is a major supplier in Eurasia both in terms of the number of projects and geography. 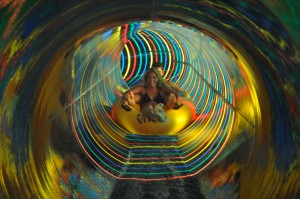 The company seems very proud of its Turkish heritage and you have two waterpark resort projects that just opened in Turkey. Tell us about those two projects and what the waterpark market is like in Turkey.

Turkey is our home country. Our inspiration comes from Turkey. As you know, Turkey has an important logistics advantage due to its geographic location. Turkey is at a place where West and East meet, where you can still feel the trace of hundreds of cultures who have lived in this region and where you can fully experience all four seasons. Living in such a beautiful, multi-cultural environment creates a synergy among our team. Turkey is a land with vast amounts of cultural and historical heritage, having been influenced by European, Asian, Middle Eastern, Balkan, Slavic, and North African cultures at some point. This brings together an important flexibility while working with different cultures.

Projects in Turkey mean a lot to us, but Turkey’s share in our total production is just 10%, although the market is growing. In Turkey, the resort market and resort waterparks are very popular. For example, in Antalya, every single resort has its own waterpark. In 2013, we announced the opening of two major waterparks in Antalya both belonging to the same group: Crystal Hotels. One project is Sunset and the other is Waterwold.

You have an impressive list of projects in Europe, including a project in Ukraine and the high profile Aquaventure Avonturenpark in the Netherlands. Can you talk about the differences between the two projects and what it is like working in both Eastern and Western Europe?

In Europe, our total number of projects is now about 750. Because of the inherent cultural flexibility we have as a Turkish company as already mentioned, we adapt readily to the diverse needs of customers in different countries, climates, cultures and physical environments. What works in one country may well not work in another.

In 2013, we had some remarkable projects in Europe, including Avonturenpark Hellendoorn Slide Park, as you mentioned. This park features eleven waterslides all designed and built by Polin. This was a surge of new improvements and a fresh start for a park that had in previous years averaged one new ride per annum. 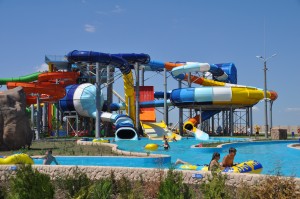 From Eastern Europe, one project we completed in 2013 was for Aqua Park Odessa in Ukraine. The park’s development first began in January of 2013, and resulted in what is now south Ukraine’s largest waterpark, boasting an amazing 20,000sqm of project space. Owners Valerij Avdeev and Evgenij Krasnov worked closely with us to design and manufacture over 27 attractions within the park. Aqua Park Odessa’s most notable feature, however, is the variety of water slides.  With a €20 million budget to work with, we were able to develop a truly unique design for the park, implementing a great variety of water rides. Plus, we had the opportunity to launch our new Space Shuttle slide at the Odessa park.

Asia is a huge market for waterparks. Thailand’s Santorini Water Fantasy just opened. Tell us what products you provided there and what makes this property unique. 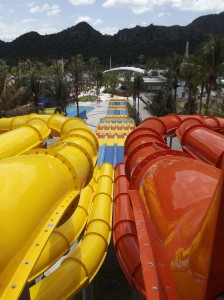 Santorini Water Fantasy, which opened in August of this year, is part of a large complex, Santorini Park, an amusement park adjacent to the Cha-Am Premium Outlet Mall. The group plans to add another 8 acres adjacent to the site and also build a three-star, low-rise resort with about 150 rooms. The project is expected to be completed next year.

The rides are unique and are new to that region. We also see this project as being indicative of a trend with amusement parks expanding their waterpark brands.

What types of waterparks do you think are most successful in Asia?

The Asian market is increasingly important to us and we’ve spent a lot of time in the field there over the last 12 months. The primary trend we have observed in Asia is towards larger traditional waterparks similar to ones you might find at tourist destinations in the United States.

Does Polin do its manufacturing entirely in Turkey?

You’ve also done some work recently on the Carnival Sunshine. We heard a lot about cruiseship waterslides in the past few years. Do you see that as a continuing trend?

We supplied Carnval Sunshine’s new waterpark. The project features three Aquatube slides —including the cruise line’s longest — and a water play structure with 40 different interactive water features. What is unique about this Project is its racing theme. We applied Magic Shine Technology, Natural Lights Effects, and Special Pattern Effects to create the racing theme that is featured in the black-and-white coloring on the Sunshine’s Speedway Splash racing slides.

Your King Cobra slide is very popular, with 20 installations globally so far. It is also a highly themed waterslide. How important is theming in the waterslide market? 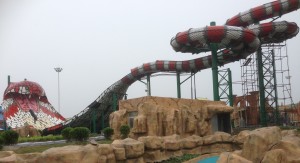 King Cobra is very popular for a few reasons:  it is a high capacity ride. It is interactive with two double tubes racing each other. And it has a strong visual impact and a spectator appeal. Special effects are integrated. There is water spraying, a hissing sound –  it is creatively themed. King Cobra is the first to offer a theme story built into its fiberglass design, which—by the way—doesn’t have to be based on a cobra. Right now, for example, we are creating a dragon-themed version for a project in China, we completed a ship theme in Indonesia for Bugis Waterpark, and a Humangaosur theme for the Cartoon Network Amazone Waterpark project.

I believe we will be witnessing several major changes in the waterslide world in the near future. One major rising trend is “theming”. Customers want waterslides to tell them stories. The rides that tell the best stories will be the most popular.

How is advancing technology integrated into your waterslides?

Providing attractions with special effects and technology built in is very attractive to park owners. That’s why we are putting a huge emphasis on this in our product line. For example, we do not want customers to have to purchase traffic light products separate from the rides themselves. Instead, we develop attractions with these components already designed into them. Plus, our patented Natural Light Effects, Special Pattern Effects offerings are available for almost all our products.

In closing, what do you feel is Polin’s main competitive advantage?

Overall, with 37 years of experience across the globe in the composites sector, we’ve developed an unmatched business and technological expertise. With over 2,000 projects in our portfolio, our wealth of experience continues to grow. 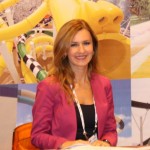 Sohret Pakis studied Economics at Bogazici University in Istanbul, and went on to receive her master’s degree in Economic History at the same university.  Her first work experience  was at Pfizer Pharmaceuticals. In 2003, after working at Pfizer for 3 years Sohret joined the Polin team. Sohret is the Director of Marketing and Communications.