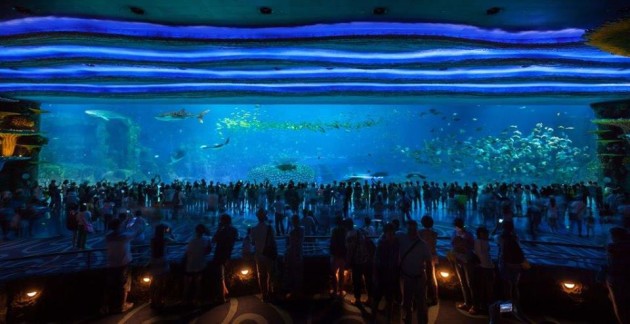 “PGAV Destinations has executed world-class projects all over the world,” said Gulfport Chief Administrative Officer Dr. John Kelly. “We wanted a company with not only extensive theme-park experience, but one that is also knowledgeable about the aquarium industry. We chose PGAV for their expertise and record of success.”

While the GRC continues to fundraise, the Aquarium currently maintains a budget of $40 million and is slated to be developed on 10 acres bordered by the Mississippi Sound and scenic Jones Park and downtown Gulfport, uniting city and Sound. Based on budget and footprint, the new Aquarium will be on par with similar, top-US destinations such as the New England Aquarium and the Aquarium of the Pacific.

Early discussions with the team highlight the story of the “Brown-to-Blue-Water Corridor,” where the silt-laden waters of Mississippi’s rivers meet the blue waters of the Gulf of Mexico. This confluence creates a rich and verdant ecosystem which comprises 3,540 miles of coastline, 33 major river systems, 207 estuaries, 29 marine mammal species, 49 shark species, and myriad unique species of fish, birds, and reptiles. The team is aiming to create a unique experience that explores these fascinating environments and how they impact the Gulf of Mexico and the Mississippi Region.

“We’re honored to be part of the redevelopment of Gulfport,” said Emily Howard, Aquarium project lead at PGAV Destinations. “We are excited to be designing this Aquarium attraction with Gulfport from the ground up so the goals and interests of the city and its residents can be incorporated from the very beginning. It’s also great to partner with Eley Guild Hardy Architects as the local architect, because of their deep knowledge of the local community, the people, and the region.”

Joe Kleimanhttp://wwww.themedreality.com
Raised in San Diego on theme parks, zoos, and IMAX films, InPark's Senior Correspondent Joe Kleiman would expand his childhood loves into two decades as a projectionist and theater director within the giant screen industry. In addition to his work in commercial and museum operations, Joe has volunteered his time to animal husbandry at leading facilities in California and Texas and has played a leading management role for a number of performing arts companies. Joe previously served as News Editor and has remained a contributing author to InPark Magazine since 2011. HIs writing has also appeared in Sound & Communications, LF Examiner, Jim Hill Media, The Planetarian, Behind the Thrills, and MiceChat His blog, ThemedReality.com takes an unconventional look at the attractions industry. Follow on twitter @ThemesRenewed Joe lives in Sacramento, California with his wife, dog, and a ghost.
Share
Facebook
Twitter
Linkedin
Email
Print
WhatsApp
Pinterest
ReddIt
Tumblr
Previous articleTriotech Gives LEGOLAND Parks the Upper Hand on Interactive Dark Rides with Introduction of Maestro Hand Gesture Technology
Next articleWyatt Design Group Welcomes Stutz, Hirsch, and Sherbrooke, Promotes Cunningham