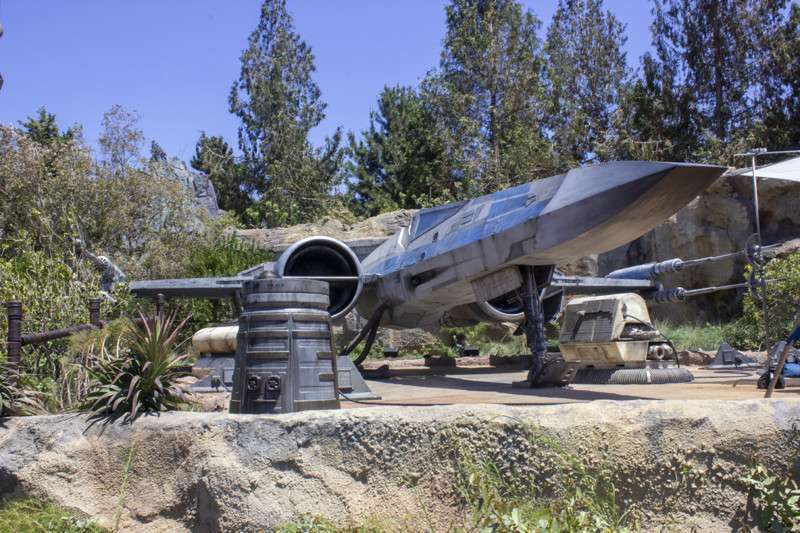 ABOVE: An X-Wing is parked at Black Spire Outpost.

Star Wars: Galaxy’s Edge, the Star Wars-themed land at Disney Parks, is now open at Disneyland Resort in California. InPark Magazine contributor Mark Eades was among the first to explore this new land.

The full size Millennium Falcon is all lit up for the opening night ceremony on the planet Batuu at the Black Spire Outpost.

Oga’s Cantina is ready to receive all manner of scum and villainy.

Some of the exotic off-world beverage offerings from Oga’s Cantina.

A TIE Echillion Fighter.has landed at Batuu at the Black Spire Outpost, proof that the First Order is seeking characters sympathetic to the Resistance.

Droid parts pass by on a conveyer belt, available for guests to pick out, if they wish to build their own droid at Droid Depot.

Chewbacca, the heroic Wookie, cheers while standing beneath the Millennium Falcon during the opening ceremony for Star Wars: Galaxy’s Edge.

An A-Wing is parked at Black Spire Outpost.

The Millennium Falcon sits at the ready to receive visitors wishing to fly the “fastest hunk of junk in the Galaxy.”

R2-D2 is one of the many droids on sale in the Droid Outpost at Black Spire Outpost.

Some of the equipment that is undergoing maintenance seen while in the queue line for Millennium Falcon: Smuggler’s Run attraction.

The classic sitting area inside the Millennium Falcon seen by guests as they prepare to pilot the “fastest hunk of junk in the Galaxy.”

Joe Kleimanhttp://wwww.themedreality.com
Raised in San Diego on theme parks, zoos, and IMAX films, Joe Kleiman would expand his childhood loves into two decades as a projectionist and theater director within the giant screen industry. In addition to his work in commercial and museum operations, Joe has volunteered his time to animal husbandry at leading facilities in California and Texas and has played a leading management role for a number of performing arts companies. Joe has been News Editor and contributing author to InPark Magazine since 2011. HIs writing has also appeared in Sound & Communications, LF Examiner, Jim Hill Media, and MiceChat. His blog, ThemedReality.com takes an unconventional look at the attractions industry. Follow on twitter @ThemesRenewed Joe lives in Sacramento, California with his fiancé, two dogs, and a ghost.
Share
Facebook
Twitter
Linkedin
Email
Print
WhatsApp
Pinterest
ReddIt
Tumblr
Previous article“无论我们走到哪里” The Producers Group 拥抱未来，不忘过去
Next article公园即是舞台： 十种改变游乐景点产业的音视频技术（选录）