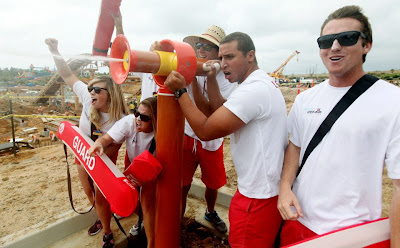 Guests of LEGOLAND California and LEGOLAND Water Park are invited to board boats and plunge 25 feet down a chute between two pirate ships and make a giant splash! The fun doesn’t stop there… equipped with 12 water cannons, guests can choose which ship to board and choose who they’d like to battle: Captain Blue Brick or Captain Red Brick.

“Experiencing great success with both our Pirate Shores attraction and LEGOLAND Water Park, we felt creating a pirate-themed splash down ride would be a great addition to our park,” said LEGOLAND California General Manager Peter Ronchetti. “Of course our Model Citizens (employees) take pride in each of their areas so it’s only natural for our lifeguards and pirates to want to take ownership of this new ride, but there is plenty of room for all to play.” 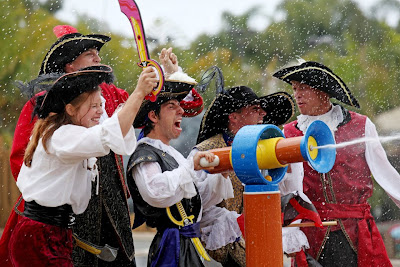 Pirate Reef features two massive pirate ships that stand 20 feet high and 40 feet long, a splash bridge that is sure to leave guests soaked and a pirate inspired brick building play area. Throughout Pirate Reef more than 30 pirate-themed LEGO® models, made up more than 223,000 LEGO bricks, are featured including both Captain Red Brick and Captain Blue Brick, pirates, monkeys, parrots and more.

LEGOLAND® California Resort includes LEGOLAND California and SEA LIFE™ Carlsbad Aquarium, both geared for families with children between the ages of 2 and 12. At LEGOLAND California, you’ll find more than 60 rides, shows and attractions including the 5.5 acre LEGOLAND® Water Park, the all-new LEGO Star Wars Miniland and Pirate Reef opening this summer. SEA LIFE incorporates LEGO models into a child’s voyage to the depths of the ocean and features play zones, fun facts and quiz trails and its newest attraction, Claws. For more information, log on to www.LEGOLAND.com or call (760) 918-LEGO.

Joe Kleimanhttp://www.themedreality.com
Raised in San Diego on theme parks, zoos, and IMAX films, Joe Kleiman would expand his childhood loves into two decades as a projectionist and theater director within the giant screen industry. In addition to his work in commercial and museum operations, Joe has volunteered his time to animal husbandry at leading facilities in California and Texas and has played a leading management role for a number of performing arts companies. Joe has been News Editor and contributing author to InPark Magazine since 2011. HIs writing has also appeared in Sound & Communications, LF Examiner, Jim Hill Media, and MiceChat. His blog, ThemedReality.com takes an unconventional look at the attractions industry. Follow on twitter @themedreality Joe lives in Sacramento, California with his fiancé, two dogs, and a ghost.
Share
Facebook
Twitter
Linkedin
Email
Print
WhatsApp
Pinterest
ReddIt
Tumblr
Previous articleAsian Attractions Expo 2013 Will Take Place at Marina Bay Sands in Singapore
Next article40 College Students to Represent United States at EXPO as USA Pavilion 2012 Ambassadors