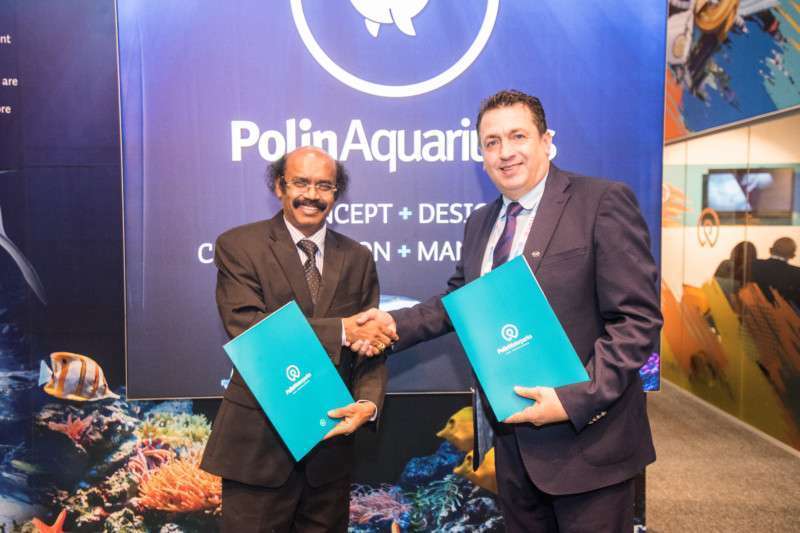 On the first day of the IAAPA Attractions Expo, an agreement was made between Mr. Ayhan Şentürk, vice-president of Polin Aquariums and Mr. V.G.P Ravidas, IAAPA board member and president of VGP Marine Kingdom. This agreement consists of the installation of acrylic panels and life support systems for the tunnel aquarium project in Chennai, India.  According to a company statement, “Polin Aquariums is proud to be able to help complete this project which had been stopped due to technical difficulties.  It is an honor for the Polin family of brands to collaborate with VGP Marine Kingdom, a company known for its famous water parks,  theme parks, resort hotels and winter attractions (Snow Kingdom).”

VGP Marine Kingdom will be India’s first major public aquarium. Set in the VGP World Theme Park in the resort area of Chennai, the aquarium will serve the dual purpose of entertainment and education. VGP Marine Kingdom will be this first of many commercial Aquariums in India. The complex will include a restaurant, educational opportunities and exhibition areas. The total area for the Aquarium is 7,500m2  in 5 different concept zone and spread over three levels,there will be a underwater tunnel which is 48 meters long  it’s over 30 display aquarium tanks and 4.000.000 liters of water volume.

Joe Kleimanhttp://wwww.themedreality.com
Raised in San Diego on theme parks, zoos, and IMAX films, Joe Kleiman would expand his childhood loves into two decades as a projectionist and theater director within the giant screen industry. In addition to his work in commercial and museum operations, Joe has volunteered his time to animal husbandry at leading facilities in California and Texas and has played a leading management role for a number of performing arts companies. Joe has been News Editor and contributing author to InPark Magazine since 2011. HIs writing has also appeared in Sound & Communications, LF Examiner, Jim Hill Media, and MiceChat. His blog, ThemedReality.com takes an unconventional look at the attractions industry. Follow on twitter @ThemesRenewed Joe lives in Sacramento, California with his fiancé, two dogs, and a ghost.
Share
Facebook
Twitter
Linkedin
Email
Print
WhatsApp
Pinterest
ReddIt
Tumblr
Previous articleHeather Blair and Hayley Kenney leading Holovis’ new commercial cinema division
Next articleGRS Fantasy Park completes switch to full automation with Semnox Parafait