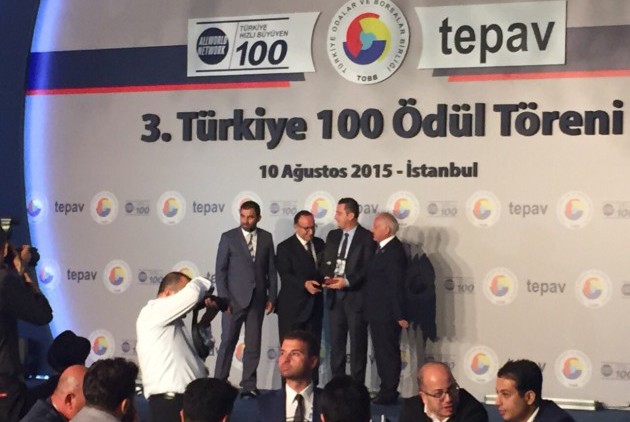 Istanbul, Turkey (August 31, 2015) — Polin was recently identified as among The Turkey100, a prestigious list of “game-changing entrepreneurs” identified by AllWorld Network. AllWorld cited Polin among the businesses it referred to as one of the Turkey’s fastest-growing companies that “are pioneering solutions in old and new industries.” The organization noted that the distinguished firms had collectively created 11,000 jobs in three years.

This is the second time that Polin has been privileged with an appearance on the list, as one of the 100 fastest growing companies in Turkey. It was included for the first time in 2013. In total, only 16 companies have received the honor more than once.

Polin is one of the world’s leading firms in the design, engineering, manufacturing and installation of waterparks, waterslides and water-play attractions. Specifically, Polin has been a pioneer in the advancement and application of closed-molded manufacturing technology in waterslide development. Polin’s signature rides, like King Cobra, Sphere, Space Shuttle and Turbulance and its forward-thinking innovation in manufacturing technologies have led to the firm expanding its operations throughout Asia to Europe, China, Canada, Australia, the United States and beyond in 93 countries under Polin brand.

The list of honorees was announced during the AllWorld Turkey100 Awards Gala, which took place in Çırağan Palace Kempinski on August 10. The event was opened by the president of TOBB Rıfat Hisarcıklıoğlu and the president of TEPAV Ozan Acar. It was hosted by AllWorld Network, the Ministry of Commerce, the Union of Chambers and Commodity Exchanges of Turkey (TOBB) and the Economic Policy Research Foundation of Turkey.

Impressive numbers
Hisarcıklıoğlu said the total combined turnover of all the companies on the list was $2.7 billion, with an average of $25 million. Specifically, for the 2011-2013 period, the average growth rate was 358 percent – 15 times faster than the entire economy’s growth rate.

In total, the companies on the list employ nearly 18,000 people, with an average number per company of 185 – an increase of 88 percent between 2011 and 2013. “These companies provided jobs for more than 8,000 people during this period,” Hisarcıklıoğlu said.

Identifying the best of the best
Baris Pakis, President of Polin, and Sohret Pakis, Director of Marketing and Communication of Polin, attended the awards ceremony. Baris Pakis said his company was honored to be among the top 100. “Polin strives to stay at the forefront of technology, as well as providing the highest quality of service to our clients and partners,” he added. “It is truly a privilege to receive this commendation, and we are humbled to be named alongside some of the most-well-respected business leaders in our country.”

More on Allworld Network
Founded in 2008 by Deirdre M. Coyle Jr., Anne S. Habiby and Harvard Business School Professor Michael E. Porter, AllWorld’s mission is to find and scale all growth entrepreneurs of the emerging world by 2015. AllWorld systematically identifies and ranks the fastest-growing private companies. In addition to the Turkey100, it has created the Arabia500, Africa500, Asia500, Eurasia500 and America500. An AllWorld ranking puts companies on the world map, attracting new investors, customers, growth partners and talent. The company refers to these advantages as Visibility EconomicsTM.

More on Tepav
The Economic Policy Research Foundation of Turkey is a nonpartisan, nonprofit think tank based in Ankara, Turkey. It was founded in 2004 by a group of businessmen, bureaucrats and academics who believe in the power of knowledge and ideas in shaping Turkey’s future. Aiming to contribute to public policy design, TEPAV seeks to enrich the knowledge content in Turkey’s discussions. What sets TEPAV apart, however, is its active involvement in economic and political development. TEPAV carries out projects that actively contribute to economic development and bring together key policy and opinion makers to tackle the problems of the day. TEPAV sticks to academic ethnical principles and quality in all activities.

Joe Kleimanhttp://wwww.themedreality.com
Raised in San Diego on theme parks, zoos, and IMAX films, Joe Kleiman would expand his childhood loves into two decades as a projectionist and theater director within the giant screen industry. In addition to his work in commercial and museum operations, Joe has volunteered his time to animal husbandry at leading facilities in California and Texas and has played a leading management role for a number of performing arts companies. Joe has been News Editor and contributing author to InPark Magazine since 2011. HIs writing has also appeared in Sound & Communications, LF Examiner, Jim Hill Media, and MiceChat. His blog, ThemedReality.com takes an unconventional look at the attractions industry. Follow on twitter @ThemesRenewed Joe lives in Sacramento, California with his fiancé, two dogs, and a ghost.
Share
Facebook
Twitter
Linkedin
Email
Print
WhatsApp
Pinterest
ReddIt
Tumblr
Previous articleIssue 58: Technology 2015
Next articleBrick-or-Treat Returns to Scare Up Spooky Fun at LEGOLAND California Resort