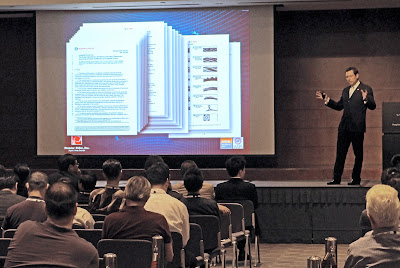 Seay’s presentation was part of an all day IAAPA educational program that brings experienced professionals from around the world to various global locations to deliver a concentrated program on many aspects of safety in the amusement industry. Before an audience of several hundred conference attendees, Seay highlighted independent third-party data that strongly demonstrates the industry’s impressive record of safety; at the same time he noted that the dramatic growth in new markets, combined with the innovative nature of the amusement industry, requires further vigilance and detailed attention to the safety process.

Seay discussed the most recent TEA/AECOM Global Attractions Attendance Report, which noted the Asia region is poised to surpass the North American market to be the world leader in theme park attendance. Seay emphasized several Asia-based examples, including the global debut of Transformers: The Ride, located at Universal Studios Singapore, which showcases the latest innovations in the attractions industry. He noted that going forward, Asia will likely be a leader in the creative development of new attractions, each with their own unique safety implications.

Seay presented a model that allows manufacturers and operators of all sizes the opportunity to emulate the Gold Standard formulas for safe and successful ride development used by large destination resort entities like Universal and Disney. The model relies on transparent communication between the ride manufacturer and the operator; emphasizes a conservative, multiphase design approach that is backed by globally accepted safety standards like those of ASTM F24 and EuroNorm; and incorporates a very independent third-party review of both the design and manufacturing phases.

The current environment for safety standards use in Asia was reviewed; Seay discussed the disparate nature of the region: some locations, such as Hong Kong and Singapore, have globally-respected regulatory efforts mandating conformance to ASTM standards; other countries in the region have either non-consensus standards or very limited to no oversight. Seay strongly recommended that in order to enhance safety in the amusement attractions industry, all countries within the region should emulate Hong Kong and Singapore’s strong emphasis on safety in their regulatory language. Seay remarked, “With ASTM F24 standards meeting the WTO guidelines that define international standards acceptable for global use, the ASTM process is one that any country in the world can use to expeditiously include globally-recognized standards in their code. Additionally, the very low cost of entry, at virtually no cost for developing nations, makes the model very appealing.” ASTM’s Memorandum of Understanding (MOU) program, which was developed to support the WTO’s Technical Barriers to Trade Agreement, aiming to remove financial and institutional barriers in order to promote standards development activities in developing countries, was explained to attendees.

Seay illustrated that participation in the standards development process and access to established safety standards are essential to the wellbeing of both consumers and the attractions industry alike. He concluded his presentation by demonstrating the rapid safety standard development process that ASTM has established to react efficiently to innovative products that are being quickly introduced to consumers, such as zip lines and trampoline courts. A key facilitator to this collaborative global effort is ASTM’s WebEx technology, which allows web-based stakeholder participation from around the world at virtually no cost. Seay’s final words were a rallying cry to participate in the safety effort and to be passionate about the process.

ABOUT ASTM COMMITTEE F24
ASTM Committee F24 on Amusement Rides and Devices was formed in 1978. F24 meets twice a year, usually in February and October, with over 150 members from around the world attending several days of technical meetings. The Committee, with current membership of over 600 global members, currently has jurisdiction over 17 standards, which are published in multiple languages in the Annual Book of ASTM Standards, Volume 15.07. These standards continue to play a preeminent role in all safety aspects important to amusement rides and devices.

Joe Kleimanhttp://wwww.themedreality.com
Raised in San Diego on theme parks, zoos, and IMAX films, InPark's Senior Correspondent Joe Kleiman would expand his childhood loves into two decades as a projectionist and theater director within the giant screen industry. In addition to his work in commercial and museum operations, Joe has volunteered his time to animal husbandry at leading facilities in California and Texas and has played a leading management role for a number of performing arts companies. Joe previously served as News Editor and has remained a contributing author to InPark Magazine since 2011. HIs writing has also appeared in Sound & Communications, LF Examiner, Jim Hill Media, The Planetarian, Behind the Thrills, and MiceChat His blog, ThemedReality.com takes an unconventional look at the attractions industry. Follow on twitter @ThemesRenewed Joe lives in Sacramento, California with his wife, dog, and a ghost.
Share
Facebook
Twitter
Linkedin
Email
Print
WhatsApp
Pinterest
ReddIt
Tumblr
Previous articleCanon USA Showcasing Latest Camera and Projector Technology at InfoComm 2012
Next articleIAAPA Offers Webinar on Women in Amusement Parks and Attractions Industry