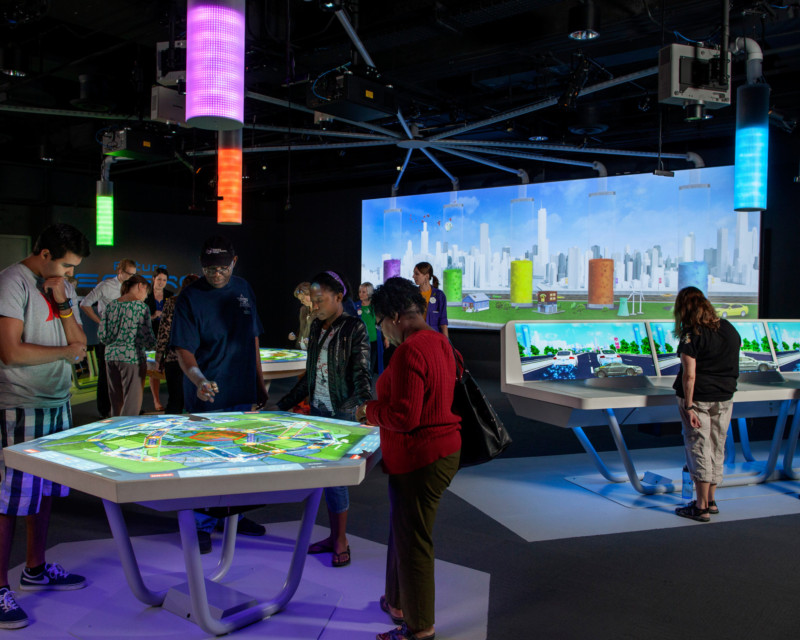 The Museum of Science and Industry (MSI) set out to create a dynamic exhibit targeted to middle school students that introduced them to the current energy landscape and inspire them to think about how they can help create a new energy future. MSI was clear from the beginning that experiential learning was necessary to break the typical mold of science exhibits. The Museum also wanted the exhibit to have a firm foothold in reality. Utilizing real world data (and being able to adjust to that changing data) was important. That meant creating a sophisticated computer and A/V system for the exhibit’s backbone. The Museum turned to Evidence Design, Potion Design and Electrosonic to help develop the overall experience, create the gaming modules and provide the technology to power it all.

First stop is the Energy Garden where visitors get to play with various electro-mechanical devices to create “energy” —for example, riding a stationary bike will turn on a light. 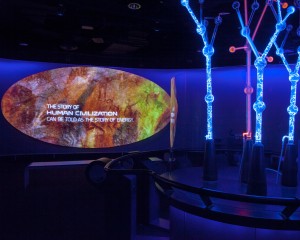 After several minutes, the lights around each of the activities dims and attention is drawn to a 20-foot wide curved oval screen at one end of the Energy Garden. A six-minute Future Energy Film provides context for the entire exhibit. The story opens with a sweeping journey across the increasingly complex ways we have extracted energy from Earth’s environment, building to a sense of today’s urgent challenges and the promise of “future energy” now rising on the horizon.

“The film shows that the Energy Garden and interactive games aren’t disembodied experiences,” says film producer Donna Lawrence. “It places the activities the visitor has just completed and will embark on in the context of the full exhibit and the entire energy story.”

While appearing naturally within the room, the curved screen required much more manipulation than expected. The Energy Garden contained a low ceiling space and the team wanted a cinematic experience that wasn’t interrupted by people walking in front of the screen. The only space for the Barco 3-chip DLP short throw projector was mounted to the ceiling, tucked between speaker cans and lighting tracks. 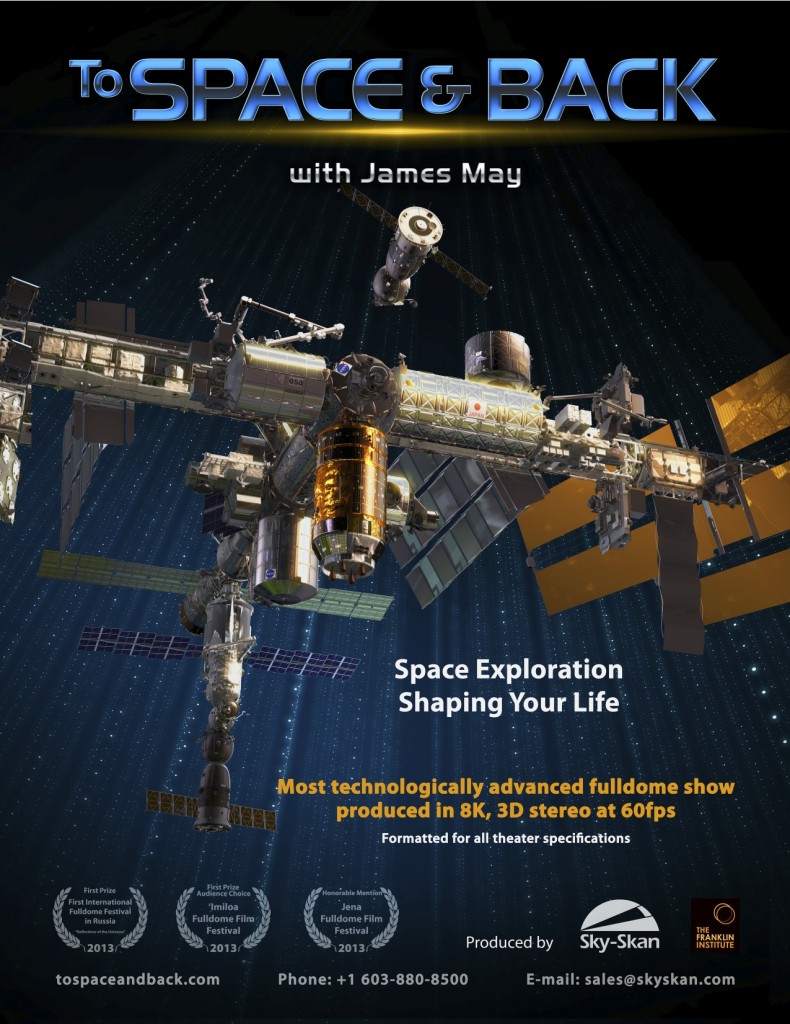 Short throw lenses need to be on axis with the center of the screen. For a ten-foot tall image, the projector should be roughly at the five-foot mark. With the ceiling-mounted projector positioned well above the top of the oval, the team borrowed technology from dome theaters to adjust for the change in axis. A Seventh Sense media server provides geometric correction and warping to adjust for the curved screen as it feeds the media to the projector.

A pathway leads to the simulation area where the guests form teams and set off to play games at five different interactive stations. Samsung LCD monitors are configured to form the Future House station with sides and a roof, which offers a range of multi-touch interactives with localized audio. The Future Neighborhood game extends the residence concept with more multi-touch interactives. 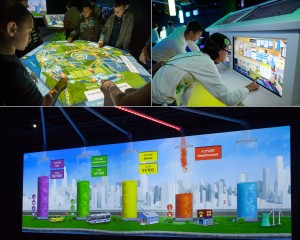 Dr. Patricia Ward was the Museum’s Project Director for the exhibit. The exhibit was designed to be primarily an in-depth experience and secondly, an opportunity for students to play together cooperatively and competitively while learning.

“We designed this to be somewhat of a foil to Science Storms [the Museum’s award-winning permanent physics exhibit from 2010],” explains Dr. Ward. “We wanted this exhibit to be unique and different.”

Ultimately, says Dr. Ward, the objective is for the technology to engage people. “At MSI, we continually push ourselves to develop ever more meaningful experiences, to move away from pushing buttons and observing.”  • • •