ProSlide: The year of togetherness 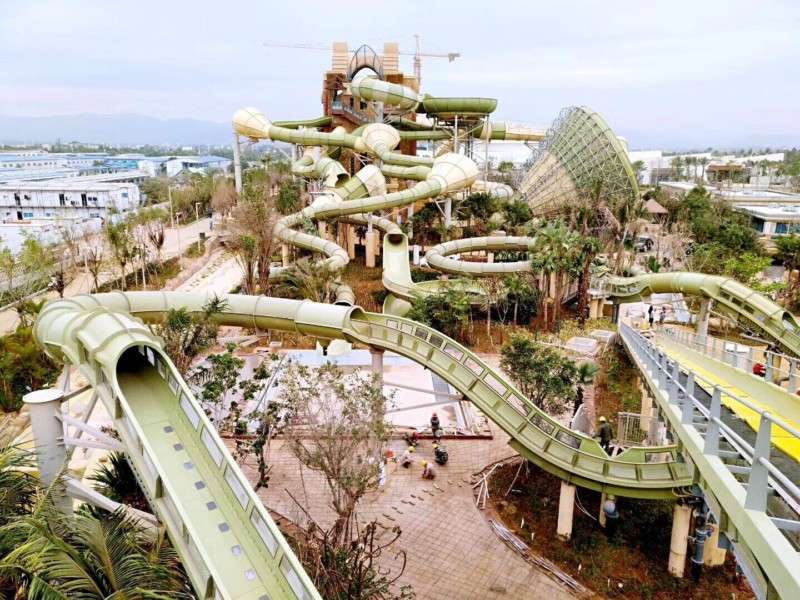 During IAAPA’s AAE 2018 show, ProSlide was touting the recent opening of 15 of their slides at the Atlantis Sanya resort in nearby Hainan Island. The 15 slides encompass 35 experiences, many of them in hybrid slides, combining major elements into one slide path. The project includes some world firsts for Asia, including China’s first RocketBLAST® and the first fusion of a 40 foot BehemothBOWL™ leading into a 60 foot TORNADO® funnel.

The rides for the park, according to John Collins, ProSlide’s marketing creative director, reflect some major trends in the waterpark business.

“Families in Asia tend to want to experience attractions together,” said Collins. “North American families tend to split up more while at the park, though that trend too is changing as parks everywhere are demanding larger, higher-capacity attractions.”

Waterparks in Asia tend to be set up more for resort travel, rather than just day trips. There is less pressure to cram a lot into a short period, but also a need for having a broad range of experiences available.

“We’ve seen a demand for a family thrill ride category,” explains Collins. A standard family attraction may be not exciting enough for teenagers, but ProSlide feels there is a sweet spot where you can get enough thrill for parents and older kids, while still keeping everyone safe and together. ProSlide introduced several new products this year and expect to develop more in the near future.

Sometimes the solution for family thrills comes in the form of complementary experiences. At Atlantis Sanya two slides pass through the park’s shark tank. The Freefall speed slide gives a thrilling drop through the tank, while PIPEline™ allows for a less intense journey through the tank. According to Collins, the slide uses some reverse thrust to slow down riders and give them more time to look at the sharks swimming around them.

Back in North America, ProSlide recently installed two new rides for Hershey Park. First, they opened the world’s first HydroMAGNETIC® ROCKET® with saucers. The ride was built on an existing tower and designed to fit around an operational building and lazy river. ProSlide also redesigned the raft and FlyingSAUCER® elements to accommodate the unique needs of the hybrid slide.

Hershey’s second slide also plays on the concept of experiencing slides together. The RallyRACER™ product was engineered to create additional rallying points, where individual body slides converge and racers get to see each other during the ride. The slides feature a U-shaped flume, allowing riders to go in and out of enclosed portions of the slide safely and predictably.

“We knew we wanted to play on that element of competition from the start,” said Collins. “The experience becomes even more interactive as friends try to best one another. Even though it’s an individual slide, it is an experience people enjoy together.”