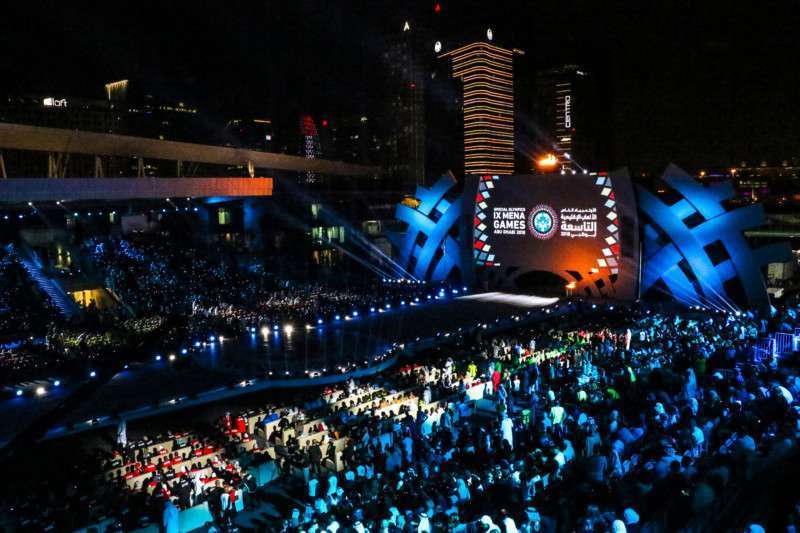 The games opened in Abu Dhabi on Saturday, March 17. After taking a tour of the city, hitting some famous landmarks along the way, the Olympic torch finally arrived at ADNEC to the applause of the waiting 2000 spectators. Once the ‘Flame of Hope’ cauldron was lit, the show began. A video entitled ‘Welcome to my City’ was played and more than 1,000 Special Olympics athletes from 32 different countries entered the arena in a colorful parade.

Celebrating people of determination’s sporting abilities and talents, this is not only a significant event in the MENA region, but it also is an important test event for the 2019 World Games. With that, Protec’s client and show producers – HQ Worldwide wanted to deliver an opening ceremony that set the scene for the week ahead and paid due respect to the talented athletes from the UAE and visiting countries.

This is the second time Abu Dhabi hosted the MENA regional games, the last time being ten years ago in 2008 and it has grown in size since then. From 23 countries and 12 sports to 32 countries and 16 sports, it shows how people’s perceptions are changing by welcoming diversity, becoming more inclusive, and celebrating the abilities of people of determination.

Protec provided lighting, audio and video as well as some rigging for the show in ADNEC. HQ Worldwide provided their own lighting design and the video content.

Project Manager, Simon Travis, gave us a rundown of some of the set up for lighting: “Due to the openness of the venue, scaffold towers were erected around the grandstand area. For the three big ones on the open side near the road we used our total fabrications EHD truss to span across so we could hang our lights. Underneath the grandstand five more little scaffold towers were placed so we could use our smaller truss and hang fixtures around the area.

“We had four follow spots towards the backend of the arena to pick up speakers and performances. We used 16 Super Sharpies on top of the set to create a nice beam effect up top. On the floor on either side of the stage, we used 4 Super Sharpies, our new Robe Pointes and Robe Spikies. Underneath the set, which was used as the stage entrance, we used 12 more Robe Spikies for more beam effects. Along the edges of the stage we used a total of 56 Clay Paky K10 B-Eyes with 30 SGM P2s and 24 Robe Pointes to create some interesting effects there and to wash along the stages for the performances.”

The set-up took three days, followed by four days of rehearsals in preparation for the 2 hour ceremony on the opening night.

Florian Hoss, senior video technician at Protec, described the video solutions chosen: “We used three WATCHOUT Servers for Content Playback that involved the opening video, lower thirds for name-slides, timecode for other departments and audio tracks, whereas one production machine was controlling two display machines, one main and one backup. The WATCHOUT main, backup and the incoming camera signal was then switched by a Barco S3-4K to screen.

“The screen was powered by a quadruple stack of our 30K Barco HDF-W30 FLEX Projectors. We used two main and two backups with a seamless failover switch over Widget Designer.”

There were unique challenges faced due to the heavy wind and the heat, according to Hoss. The projection tower was shaking quite a bit and the metal changed over the hot temperatures of the day to the cold of the evening meaning they had to make realignment adjustments every night.

Despite these minor challenges, overall, the projection looked sharp, and the cameras were well directed, leaving the client really happy.

Protec’s audio department handled the large space by using 24 L-Acoustic’s K2 Loudspeakers, 12 hung either side covering the area with consistent coverage front to back. These were supported by eight SB28 Subwoofers taking care of the low end all powered by the LA8 amplifiers. The system was controlled by a Digico SD5 desk. They used their new Shure Axient handheld radio systems and along with that they used Sennheiser in-ear monitors for the MCs. Communications were taken care of with Clearcom Freespeak and Helixnet, allowing the crew to wirelessly communicate effectively over the entire venue while the stage management team, Protec technicians and the client used our Motorola radios.

When asked about challenges faced on the gig, Simon as project manager had to ensure everyone was taking regular breaks and remained hydrated in the steadily increasing temperatures in Abu Dhabi.

“Our client – HQ worldwide pulled off an excellent show with a limited budget. Great show to be a part of. Were there challenges? Yes there were. Was it worth it – absolutely!” concluded Simon Travis – Project Manager Protec.

These parting words from the client summed up the entire heart-warming production quite succinctly:

“With the determination shown by the competing athletes fuelling the production team to deliver the opening ceremony in an extremely short time frame and within very tight budgetary limits, Protec, Al Laith and VK furniture delivered one of the most rewarding projects to date.” Tim Jacobs – KTS Global/ HQ Worldwide

Joe Kleimanhttp://wwww.themedreality.com
Raised in San Diego on theme parks, zoos, and IMAX films, Joe Kleiman would expand his childhood loves into two decades as a projectionist and theater director within the giant screen industry. In addition to his work in commercial and museum operations, Joe has volunteered his time to animal husbandry at leading facilities in California and Texas and has played a leading management role for a number of performing arts companies. Joe has been News Editor and contributing author to InPark Magazine since 2011. HIs writing has also appeared in Sound & Communications, LF Examiner, Jim Hill Media, and MiceChat. His blog, ThemedReality.com takes an unconventional look at the attractions industry. Follow on twitter @ThemesRenewed Joe lives in Sacramento, California with his fiancé, two dogs, and a ghost.
Share
Facebook
Twitter
Linkedin
Email
Print
WhatsApp
Pinterest
ReddIt
Tumblr
Previous articleSeaQuest to Open Newest Interactive Aquarium Near Sacramento
Next articleIAAPA Announces Special Events at Asian Attractions Expo in 2018