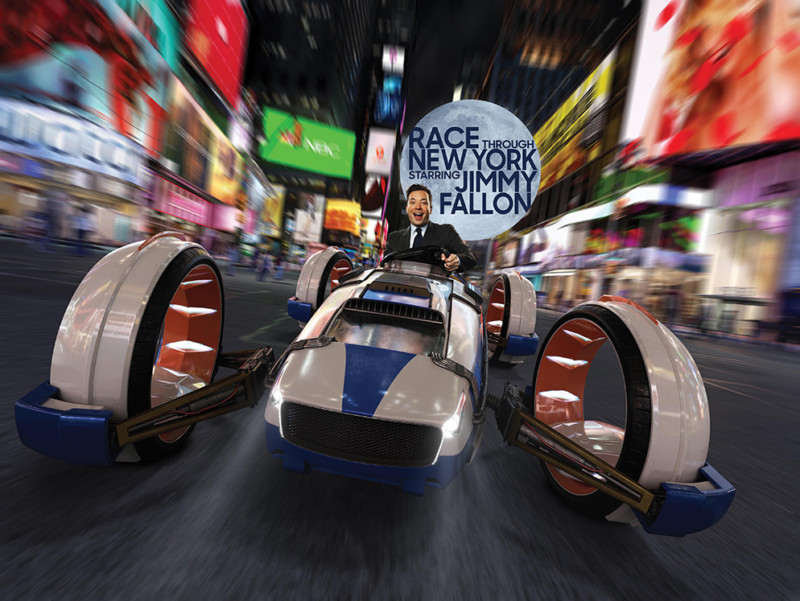 Universal Orlando Resort has announced that its newest ride, “Race Through New York Starring Jimmy Fallon,” will officially grand open on April 6, 2017. The attraction will give guests the ultimate “Tonight Show” experience as they get up close and personal with the show’s most hilarious segments before taking off on a wild and action-packed race through New York City against Jimmy Fallon himself.

To celebrate the attraction’s Grand Opening, “The Tonight Show Starring Jimmy Fallon” will take the show on the road with tapings from Universal Orlando Resort from April 3 through 6. Additional details on celebrity guests and how to become a part of the show audience will be released over time.

As they experience the attraction, guests will make their way through Studio 6B to board a flying theater, which seats up to 72 audience members, for the race of a lifetime. They will speed through the streets of New York City and all the way to the moon and back, encountering iconic landmarks from the Statue of Liberty to the Empire State Building to everything in between.

“Race Through New York Starring Jimmy Fallon” will be the first attraction at Universal Studios Florida to feature an all-new Virtual Line experience, allowing guests to spend less time waiting in line and more time discovering even more incredible thrills throughout Universal Studios. The Virtual Line system is accessible via the Official Universal Orlando Resort App or at kiosks located outside the attraction entrance.

Joe Kleimanhttp://wwww.themedreality.com
Raised in San Diego on theme parks, zoos, and IMAX films, InPark's Senior Correspondent Joe Kleiman would expand his childhood loves into two decades as a projectionist and theater director within the giant screen industry. In addition to his work in commercial and museum operations, Joe has volunteered his time to animal husbandry at leading facilities in California and Texas and has played a leading management role for a number of performing arts companies. Joe previously served as News Editor and has remained a contributing author to InPark Magazine since 2011. HIs writing has also appeared in Sound & Communications, LF Examiner, Jim Hill Media, The Planetarian, Behind the Thrills, and MiceChat His blog, ThemedReality.com takes an unconventional look at the attractions industry. Follow on twitter @ThemesRenewed Joe lives in Sacramento, California with his wife, dog, and a ghost.
Share
Facebook
Twitter
Linkedin
Email
Print
WhatsApp
Pinterest
ReddIt
Tumblr
Previous articleTwo New Family Attractions Headed to Wilderness Resort
Next articleBREAKING: Ringling Bros. Circus to Close, Final Performances in May