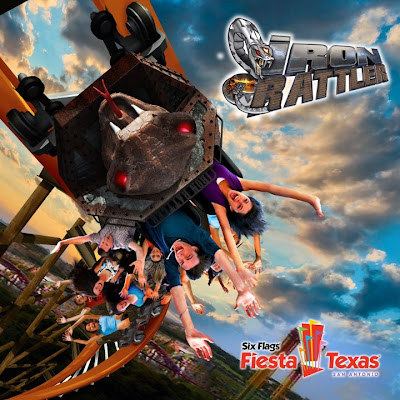 The Iron Rattler will be a unique technological marvel combining a classic wooden support structure with modern track and rails crafted of steel, allowing for unprecedented smooth and swift over-banked turns and inversions never before experienced on either a traditional steel or wooden coaster. Utilizing state-of-the-art Iron Horse Track™©® the innovative Iron Rattler will provide four over-banked turns, the most of any hybrid coaster today, and will be the first to deliver an inverted barrel roll for a unique adventure in and around the surrounding 100-ft. quarry wall setting. The New Texas Giant at Six Flags Over Texas was the first-ever hybrid coaster of its kind, and it was voted the “Best New Ride” in 2011.

With its unique construction, the Iron Rattler will have:

“Six Flags has innovation as part of our DNA and the Iron Rattler will take extreme innovation to a new level with a taller drop, faster speed and steeper banks. This cutting-edge coaster truly marries the best of both classic and modern coaster designs to deliver heart-pounding thrills,” said park president Martin Bozer.
The track will be constructed by Rocky Mountain Construction Group, who helped design the New Texas Giant at Six Flags Over Texas. Tim Baldwin, Editor, Rollercoaster! Magazine stated, “The Rattler’s transformation is expected to be nothing short of spectacular. This innovation is so new in the amusement industry; it has only been done once before. The results were tremendous, and Fiesta Texas’ project should be equally amazing.”

The original Rattler wooden coaster was Six Flags Fiesta Texas’ only major coaster when the park opened in 1992 and offered its farewell run on August 5, 2012. Construction on the Iron Rattler is already underway and will take approximately eight months to complete.

About Six Flags Entertainment Corporation
Six Flags Entertainment Corporation is the world’s largest regional theme park company with over $1.0 billion in revenue and 19 parks across the United States, Mexico and Canada. For more than 50 years, Six Flags has entertained millions of families with world-class coasters, themed rides, thrilling water parks and unique attractions including up-close animal encounters, Fright Fest® and Holiday in the Park®. For more information, visit www.sixflags.com.

Joe Kleimanhttp://wwww.themedreality.com
Raised in San Diego on theme parks, zoos, and IMAX films, Joe Kleiman would expand his childhood loves into two decades as a projectionist and theater director within the giant screen industry. In addition to his work in commercial and museum operations, Joe has volunteered his time to animal husbandry at leading facilities in California and Texas and has played a leading management role for a number of performing arts companies. Joe has been News Editor and contributing author to InPark Magazine since 2011. HIs writing has also appeared in Sound & Communications, LF Examiner, Jim Hill Media, and MiceChat. His blog, ThemedReality.com takes an unconventional look at the attractions industry. Follow on twitter @ThemesRenewed Joe lives in Sacramento, California with his fiancé, two dogs, and a ghost.
Share
Facebook
Twitter
Linkedin
Email
Print
WhatsApp
Pinterest
ReddIt
Tumblr
Previous articleWorld’s Tallest Swing Ride and Holographic Slides Highlight 2013 Additions to Six Flags Over Texas and Hurricane Harbor
Next articleCirque Dreams Joins Forces With Discovery Kingdom to Create "Splashtastic" in 2013