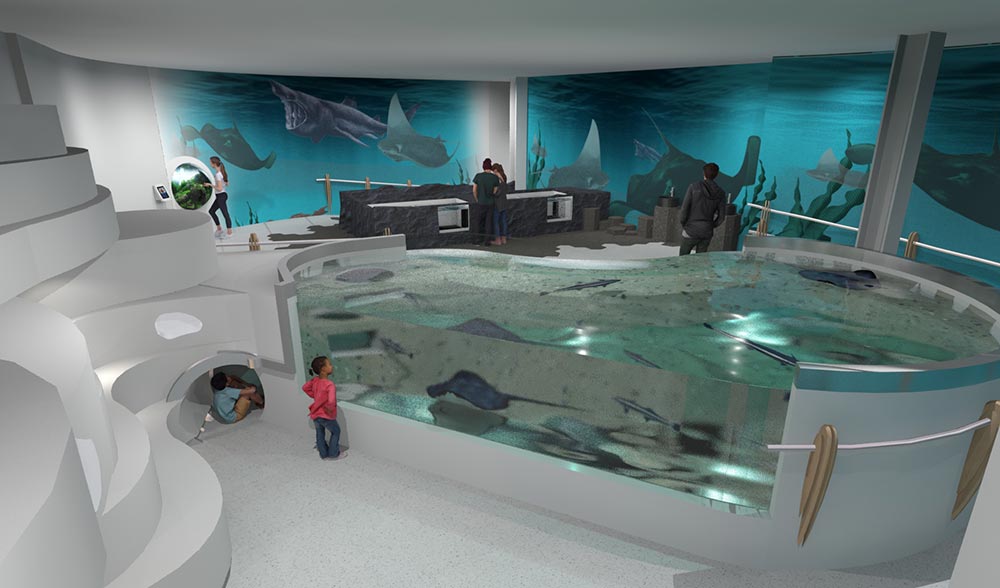 The development of the reefLIVE Aquarium building has been designed by Ethos Architects, alongside a highly experienced aquarium design team led by Imagemakers and Kay Elliot Architects. The proposal seeks to establish a welcoming and dynamic visitor attraction that will complement the surrounding Titanic Quarter. The reefLIVE facility will seek to add a new landmark to the area that respects the existing context, while also meeting the operational needs of a modern Aquarium.

The approach to designing the building has been to create a building that can maintain the highest technical standards of animal well-being, while also operating as an enjoyment and education destination.

All species housed at the reefLIVE aquarium will be very carefully sourced from responsible and sustainable sources. reefLIVE will design and build recreations of natural habitats – each display will tell a meaningful story with a strong underlying message promoting conservation of that ecosystem.

The ReefLIVE Aquarium will tell the story of how our seas are ‘All One Ocean’, showing visitors examples of the fascinating species that live in some of the most spectacular habitats around the world, from Ireland to Indonesia and from the Arctic to the Azores. reefLIVE will not display any aquatic mammals or large pelagic shark species due to its deeply held belief that the needs of these species cannot be met adequately in an aquarium. Instead, reefLIVE will tell their stories and the stories of the environments in which they live using immersive digital technology.

The Belfast aquarium will be the ReefLIVE Aquarium’s first UK project and it is likely that Belfast will be the first of several ReefLIVE aquaria, with other locations also currently under consideration. All aquaria owned and operated by reefLIVE in the United Kingdom will be designed, built and operated in full compliance with the Secretary of State’s Standard for Modern Zoo Practice and the Zoo Licensing Act 1981 and in Northern Ireland, The Zoos Licensing Regulations (Northern Ireland) 2003.

These proposals are a centerpiece of Titanic Quarter Limited and the Belfast Harbour Commissioners’ vision to create a prestigious new leisure quarter comprising a number of complementary attractions, and will be enhanced by the masterplan’s proposed public realm.

The reefLIVE Aquarium is expected to contribute significantly to Titanic Quarter’s tourism growth and increase the duration of visits to Northern Ireland. reefLIVE predicts that the aquarium will form an integral part of the new Titanic Quarter’s neighborhood of attractions and bolster interest in visits to aquaria in NI overall.

Joe Kleimanhttp://wwww.themedreality.com
Raised in San Diego on theme parks, zoos, and IMAX films, InPark's Senior Correspondent Joe Kleiman would expand his childhood loves into two decades as a projectionist and theater director within the giant screen industry. In addition to his work in commercial and museum operations, Joe has volunteered his time to animal husbandry at leading facilities in California and Texas and has played a leading management role for a number of performing arts companies. Joe previously served as News Editor and has remained a contributing author to InPark Magazine since 2011. HIs writing has also appeared in Sound & Communications, LF Examiner, Jim Hill Media, The Planetarian, Behind the Thrills, and MiceChat His blog, ThemedReality.com takes an unconventional look at the attractions industry. Follow on twitter @ThemesRenewed Joe lives in Sacramento, California with his wife, dog, and a ghost.
Share
Facebook
Twitter
Linkedin
Email
Print
WhatsApp
Pinterest
ReddIt
Tumblr
Previous articleMuseum of Discovery and Science in Fort Lauderdale seeks Director of Education
Next articlePolin provides thrills to Suntago Water World, Europe’s largest indoor waterpark