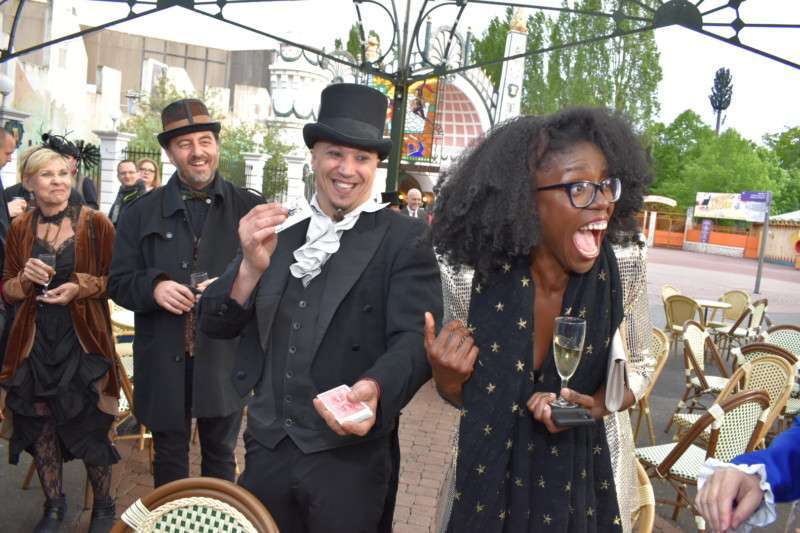 Photo above: A magician from Parc Asterix impresses SATE attendees with some sleight-of-hand tricks.

Held in early May, SATE Europe 2019 created a conference based on the theme “Moving People.” The event started with all the people moving around for a structured networking activity in the meeting rooms at the Hotel Les Trois Hiboux at Parc Asterix.

Yves Pépin (recently profiled in InPark Magazine issue #75) gave the keynote conversation, where he spoke about his early experience as a violinist. “Music taught me how to convey ideas and meaning without words,” said Pépin. “I have kept that lesson with me my entire life.”

He continued by asserting that shows must be inherently meaningful so that even someone who doesn’t understand a word of the show will still find impact in the performance. This is why, he explained, it is important to remember that you have to satisfy the client, but you are really working on behalf of the audience and consider how they will experience the finished show.

One way to do that is to continually innovate because “it brings a new feeling or experience to the audience and creates an interaction with them.”

“If there is not a challenge in each project, then you must go further,” said Pépin.

The event also included a session presented by NextGen TEA members. They briefed the crowd on a project created last year and overseen by Alex Korting and Laura Marakowitz. The team included folks from seven countries who spent the better part of the last year pitching and planning a theme park project to Alex and Laura, who acted as client developers.

The finished project, La Isla Perdida, was designed as a highly themed land with multiple attractions. Throughout SATE, team members were on hand to answer questions about the design and showcased drawings, models and a VR simulation of the project. Team members felt they had acquired a great number of real-world skills through the project and only wish La Isla Perdida were scheduled for construction!

In keeping with SATE Europe’s reputation, the event included many networking activities. Each evening consisted of a delicious dinner complete with entertainment and merriment provided by Parc Asterix. Guests were also treated to the park’s new 4D theater: Attention, Menhir!