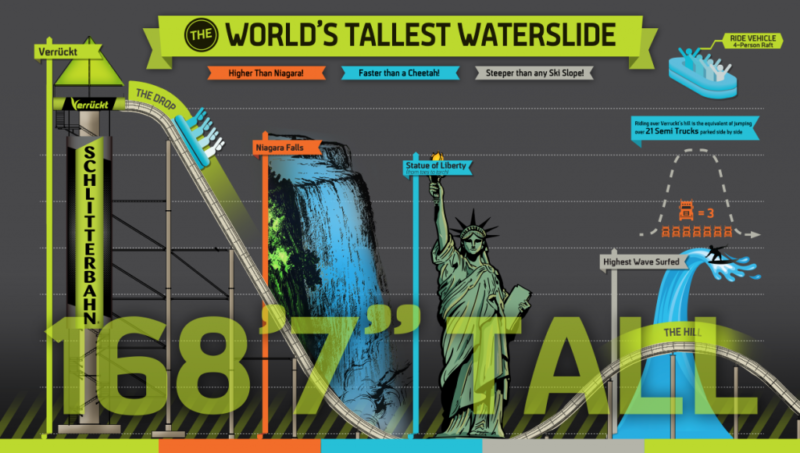 [quote]When you come to visit our city this summer you can cheer on the MLS Cup Champions, watch NASCAR racing, eat with a dinosaur, shop for just about anything you could ever need, walk in the steps of Lewis and Clark, eat amazing BBQ, and now you can go down the World’s Tallest Waterslide.”   — Kansas City Mayor Mark Holland[/quote]

Kansas City, KS, USA (April 25, 2014) — Officials at the Kansas City Schlitterbahn Waterpark have unveiled the height of it latest waterslide, Verrückt, as 168 feet 7 inches. This sets a new world record for the tallest waterslide in the world, a claim verified by Guinness World Record judge on site.

Kansas Governor Sam Brownback and Kansas City, Kansas Mayor Mark Holland, along with other Kansas City VIPs, were present to celebrate Kansas City’s latest claim to fame – the Verrückt.  Ride innovator and Verrückt builder Jeff Henry was joined by Schlitterbahn Waterpark fellow founding family members, Gary Henry, and Jana Faber at the height unveiling. The build of Verrückt is featured in Travel Channel’s  one-hour season premiere of its popular original series “Xtreme Waterparks,” which airs  on Sunday, June 29 at 8:00 p.m. ET/PT. This special features never-before-seen footage of what went into the creation of the slide – including behind-the-scenes fabrication, the testing of the ride and the very first time any human being took the plunge down! 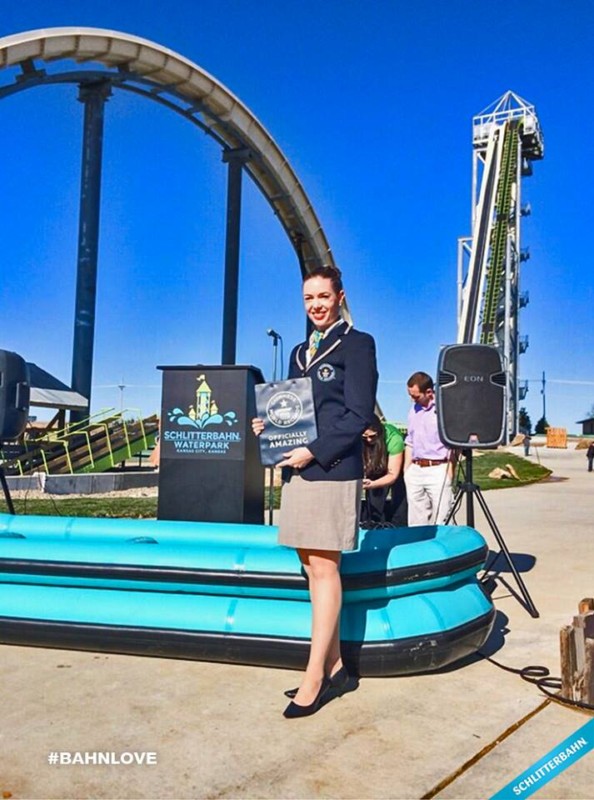 Ever since photos of the insane slide leaked out and videos went viral at the end of 2013, Verrückt’s height has been the subject of much speculation. Taller than Niagara Falls (167 feet tall) and the world’s second tallest waterslide, Kilimanjaro (164 feet tall), Verrückt is not a body slide – it’s a raft slide and features a nearly 17-story drop and a five story uphill section. The combined drops are over 200 feet. Fittingly, Verrückt is the German word for “insane.”

“This is one more wonderful attraction our state has to offer,” said Gov. Brownback. “I look forward to watching visitors ride down this record setting new addition to Schlitterbahn” KC Mayor Holland agreed. “Kansas City, Kansas is a hot spot for tourism hosting over 10,000,000 visitors every year,” said Mayor Holland.  “Kansas City, Kansas is an exciting place to visit!”

Joe Kleimanhttp://wwww.themedreality.com
Raised in San Diego on theme parks, zoos, and IMAX films, InPark's Senior Correspondent Joe Kleiman would expand his childhood loves into two decades as a projectionist and theater director within the giant screen industry. In addition to his work in commercial and museum operations, Joe has volunteered his time to animal husbandry at leading facilities in California and Texas and has played a leading management role for a number of performing arts companies. Joe previously served as News Editor and has remained a contributing author to InPark Magazine since 2011. HIs writing has also appeared in Sound & Communications, LF Examiner, Jim Hill Media, The Planetarian, Behind the Thrills, and MiceChat His blog, ThemedReality.com takes an unconventional look at the attractions industry. Follow on twitter @ThemesRenewed Joe lives in Sacramento, California with his wife, dog, and a ghost.
Share
Facebook
Twitter
Linkedin
Email
Print
WhatsApp
Pinterest
ReddIt
Tumblr
Previous articleGulf Coast’s Tallest Ropes Course and Zip Line Opening at Moody Gardens
Next articleMacGillivray Freeman Films to Be Honored for 50 Years of Filmmaking Achievements at Newport Film Festival