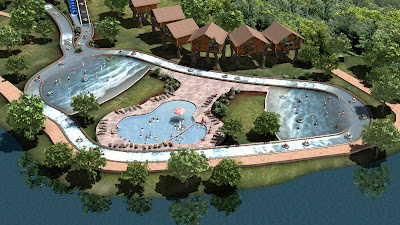 The new Tubenbach area features several new attractions and beaches allowing park guests to enjoy the new rides. Also, several of the Tubenbach attractions are interconnected through an innovative Transportainment™ river allowing tubers to stay in the water and float through the Schlitterbahn East area.

The Falls – Get ready to challenge the world’s longest waterpark ride filled with raging rapids, careening waterfalls and giant waves. Enter the world record-breaking 3,600-foot-long whitewater Transportainment river at a variety of locations including Blastenhoff, Surfenburg and new beach areas surrounding the River Bend heated pool situated at the far end of Schlitterbahn East. The Falls is a continuous rushing river that also features a ride up the park’s first Aqua Veyer™ (conveyor belt lift hill) back to the beginning of the ride allowing for an endless float.

The Falls has already been recognized as the World’s Best New Waterpark ride by the readers of Amusement Today (Golden Ticket Award), and the readers of About.com (Reader’s Choice Award).

Deluge Whirlpool River – Tubers twist through a swift moving canyon, wild with waves. This serpentine river also connects to The Falls offering a “choose your own adventure” never-ending water ride.

Boogie Bay Heated Pool – A secluded hot spring offers the perfect setting for a beverage of your choice while relaxing in a tropical setting.

“We are excited that our new collection of attractions and resort accommodations are ready for their first full summer of operation,” explained Darren Hill, Schlitterbahn New Braunfels’ general manager. “Not only do we feel that this is the most thrilling new collection of attractions to open this year in Texas, but we are also honored to be recognized as the world’s largest and best Waterpark for 14 years straight.”

The 70-acre Schlitterbahn New Braunfels Waterpark is the world’s largest Waterpark and features more than 100 slides and attractions along with 169 overnight accommodations. Schlitterbahn New Braunfels Waterpark has been voted the world’s best Waterpark for 14 consecutive years by the readers of Amusement Today industry magazine, is ranked as the most popular summertime waterpark in the United States and has been rated the number one waterpark in the world by the Travel Channel.

Joe Kleimanhttp://wwww.themedreality.com
Raised in San Diego on theme parks, zoos, and IMAX films, InPark's Senior Correspondent Joe Kleiman would expand his childhood loves into two decades as a projectionist and theater director within the giant screen industry. In addition to his work in commercial and museum operations, Joe has volunteered his time to animal husbandry at leading facilities in California and Texas and has played a leading management role for a number of performing arts companies. Joe previously served as News Editor and has remained a contributing author to InPark Magazine since 2011. HIs writing has also appeared in Sound & Communications, LF Examiner, Jim Hill Media, The Planetarian, Behind the Thrills, and MiceChat His blog, ThemedReality.com takes an unconventional look at the attractions industry. Follow on twitter @ThemesRenewed Joe lives in Sacramento, California with his wife, dog, and a ghost.
Share
Facebook
Twitter
Linkedin
Email
Print
WhatsApp
Pinterest
ReddIt
Tumblr
Previous articleTEA Spiderman event at Universal Orlando
Next articleConstruction Started on Phase Two of Galaxy Macau