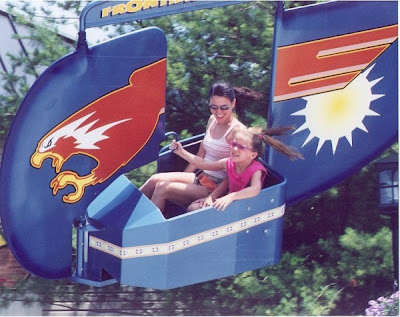 Set to debut in Spring 2013, Screamin’ Eagles is an interactive flying ride allowing guests to pilot their own flight, with no two trips the same. Open-air vehicles and high-speed rotations allow guests to control their own experience as they soar to new heights with this re-introduction of a classic.

Guests will board the flying vehicles adorned with eagles and wild flames and the ride will begin to rotate, fanning out over a large area. Each vehicle has a stationary rear wing and a moveable front wing which allow guests to dip, dive and plunge at speeds of up to 40mph. Screamin’ Eagles will be located in the Fest Area by Alice in Wonderland, giving riders a bird’s eye view of the historic River D.

“Staying true to our promise to deliver something new every year—we will keep our loyal families and thrill seekers excited about coming back for another Great Escape season,” said Don McCoy, park president Six Flags Great Escape. “Screamin’ Eagles will add a new element to the region’s best theme park.”

Screamin’ Eagles is the first of many upcoming changes for the 2013 season.

About Six Flags Entertainment Corporation:
Six Flags Entertainment Corporation is the world’s largest regional theme park company with over $1.0 billion in revenue and 19 parks across the United States, Mexico and Canada. For more than 50 years, Six Flags has entertained millions of families with world-class coasters, themed rides, thrilling water parks and unique attractions including up-close animal encounters, Fright Fest® and Holiday in the Park®. For more information visit www.sixflags.com .

Joe Kleimanhttp://wwww.themedreality.com
Raised in San Diego on theme parks, zoos, and IMAX films, InPark's Senior Correspondent Joe Kleiman would expand his childhood loves into two decades as a projectionist and theater director within the giant screen industry. In addition to his work in commercial and museum operations, Joe has volunteered his time to animal husbandry at leading facilities in California and Texas and has played a leading management role for a number of performing arts companies. Joe previously served as News Editor and has remained a contributing author to InPark Magazine since 2011. HIs writing has also appeared in Sound & Communications, LF Examiner, Jim Hill Media, The Planetarian, Behind the Thrills, and MiceChat His blog, ThemedReality.com takes an unconventional look at the attractions industry. Follow on twitter @ThemesRenewed Joe lives in Sacramento, California with his wife, dog, and a ghost.
Share
Facebook
Twitter
Linkedin
Email
Print
WhatsApp
Pinterest
ReddIt
Tumblr
Previous articleVIDEO: Opening Ceremony, London 2012 Paralympic Games
Next articleSix Flags Hurricane Harbor Invites Guests to "Drop In" in 2013 with Bonzai Pipelines