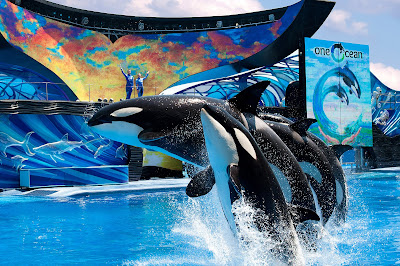 Orlando, Fla. USA (April 22, 2011) /PRNewswire/ — This Earth Day SeaWorld Orlando celebrates the world we share with the debut of the all-new killer whale show, “One Ocean.” The presentation of these extraordinary animals connects guests to the sea with a new level of energy and excitement, all while educating and inspiring guests to make a difference in this world.
“One Ocean” opens at SeaWorld Orlando today (April 22), SeaWorld San Diego on Memorial Day weekend and SeaWorld San Antonio on June 10. The show replaces the popular “Believe,” a killer whale show that enjoyed a five-year run in all three SeaWorld parks.
“One Ocean” features SeaWorld’s majestic killer whales as ambassadors of the sea, and the ocean as the center of our natural world. At the core of the show is the inspiring and educational message that both animals and humans are part of one world, with one ocean, and its future is in our hands to cherish and protect.
“One Ocean” brings to life SeaWorld’s mission in the most powerful way yet,” said Jim Atchison, president and chief executive officer of SeaWorld Parks & Entertainment. “This show is what guests love about our parks: thrilling entertainment that educates and inspires you to celebrate, connect and care for the world we share.”
Shamu Stadium, with its 3-story set, panoramic LED screens and hundreds of surround-sound speakers, now features special effects that envelop guests in the show experience, including soaring fountains, stunning underwater imagery, and an original musical score.
At 80 feet long and 30 feet tall, the SeaWorld Orlando set takes the form of an immense killer whale fluke. It incorporates the colors of the ocean’s spectrum – from cobalt blue, to aquamarine and even royal purple – while its center reflects the vivid yellows and oranges of a sunrise over the sea. Dozens of hand-crafted, translucent animal figures adorn the towering set.
Thirty-five programmable fountains, arcing up to 50 feet across the pool, ring Shamu Stadium and are synchronized to the musical score. Not only do the fountains provide dramatic effect during the show, they also serve as enrichment for the whales during playtimes throughout the day.
An original symphonic score is amplified through hundreds of speakers, giving Shamu Stadium a surround-sound experience. The musical score features three original songs intended to evoke a global stewardship message: “One Song,” “Side by Side” and “We’re One.”
But the whales are the true stars of the show. “One Ocean” features spectacular whale behaviors, including thrilling high-energy leaps and multiple whales performing simultaneously. The whales interact in new ways with trainers, the audience, one another, and even the set itself. In one segment, the whales play amid the giant fountains.
Together, trainers, producers, designers and educators have collaborated on new ways to connect with SeaWorld guests and show how closely the human and animal worlds are connected. The message of caring and respect for the world we share is woven throughout the show, encouraging guests to make a difference through their own everyday actions.
For information and photos visit: www.SeaWorld.com/OneOcean.
SeaWorld Parks & Entertainment, a portfolio company of The Blackstone Group (NYSE:BX), operates 10 parks across the U.S. including SeaWorld parks in Orlando, San Diego and San Antonio; Busch Gardens parks in Tampa, Fla. and Williamsburg, Va.; Discovery Cove and Aquatica in Orlando; Sesame Place near Philadelphia, Pa.; and water parks Adventure Island in Tampa and Water Country USA in Williamsburg. The 10 parks play host to 23 million guests each year and employ 20,000 people nationwide.

Judith Rubin
Judith Rubin ([email protected]) is a leading journalist, publicist, strategist, blogger, content marketing specialist and connector in the international attractions industry. She excels at writing about all aspects of design and technical design, production and project management. Areas of special interest include AV integration and show control, lighting design and acoustics, specialty cinema, digital video and world’s fairs. Judith has ties to numerous industry organizations. From 2005-2020 she ran communications, publications and social media for the Themed Entertainment Association (TEA). In 2013, she was honored with the TEA Service Award. She was development director of IMERSA, and co-chair of the 2014 IMERSA Summit. She was publicist for the Large Format Cinema Association in the 1990s, now part of the Giant Screen Cinema Association (GSCA) and has also contributed to the publications of PLASA, IAAPA and the International Planetarium Society. Already making her mark as a magazine and book editor, Judith joined World’s Fair magazine in 1987, which introduced her to the attractions industry. Launching as a freelancer in the mid 1990s she has contributed to dozens of publications and media outlets including Funworld, Lighting&Sound America, Sound & Communications, Urban Land, The Raconteur and The Planetarian. She joined InPark in 2010. Judith earned a Bachelor of Fine Arts from Pratt Institute. She has lived in New York City and the San Francisco Bay Area, and now makes her home in Saint Louis, where she is active in the local arts and theater community.
Share
Facebook
Twitter
Linkedin
Email
Print
WhatsApp
Pinterest
ReddIt
Tumblr
Previous article
Six Flags Over Texas Opens the NEW Texas Giant
Next article
Tourists Turn to Las Vegas For More Than Just Gambling